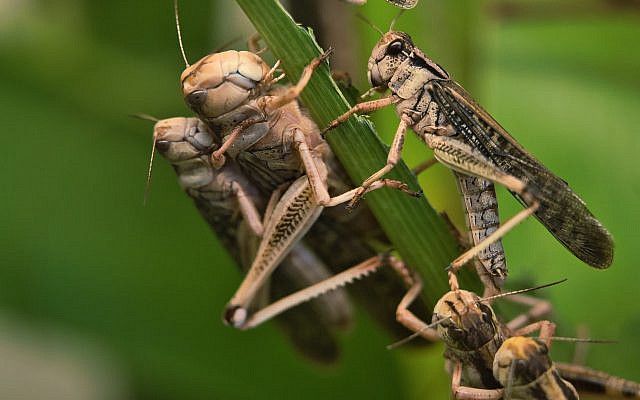 The eighth of ten plagues which G-d brought upon the Egyptians in the lead-up to the Exodus was the Plague of Arbeh — locust. Locust is the word for a Borg-like collective of grasshoppers that swarm about and destroy produce. These flying grasshoppers devastated the Land of Egypt by devouring its remaining crops. About this plague the Torah testifies, “Before it there was never a locust-swarm like it, and after it there will never be so.” (Exodus 10:14) Nonetheless, a similar story appears elsewhere in the Bible and that opens up our discussion about the grasshopper-related synonyms in the Hebrew language.

The prophet Joel foretells a calamitous famine and grasshopper infestation. He actually uses four different words to describe the invading grasshoppers in his time: first, the gazam will come and eat from the produce, then the arbeh will come and eat what the gazam left over, then the yelek will arrive and eat what the arbeh allowed to remain, and finally the chasil will come and eat what the yelek passed over (Joel 1:4). Nonetheless, Joel prophesizes that if the Jewish People will subsequently repent their sins and pray to G-d: “I (G-d) will distance the tzfoni from you.” (Joel 2:20) Rashi and Radak explain that tzfoni is also a term that refers to grasshoppers, because those pests usually migrate from north (tzafon) of the Holy Land. http://gty.im/51040279

With this background information in mind we can now discuss the different terms used in the Bible for grasshoppers. So far we have encountered five different words for grasshoppers: arbeh, gazam, yelek, chasil, and tzfoni. When the Torah discusses the types of insects that are considered ritually clean and therefore fit for consumption, the Torah lists four species of grasshoppers which fall into that category: arbeh, sal’am, chargol, and chagav. (Leviticus 11:22) This adds another three words for grasshoppers to our list. Moreover, in Psalms’ retelling of the Ten Plagues, it mentions the word chanamal,which Rashi (to Ps. 78:47) explains refers to grasshoppers (although other commentaries explain that it refers to a type of hail). If you haven’t been keeping track, we have now a total of nine different words that are used as references to grasshoppers.

Midrash HaGadol (to Ex. 10:14) records that seven of nine types of grasshoppers comprised the Plague of Arbeh in Egypt: arbeh, sal’am, chargol, chagav, gazam, yelek, and chasil. Rabbi Menachem Tzioni (a 14th century German Kabbalist) adds that chanamal was also one of the species of grasshoppers in Egypt, making the total number eight. He explains that each of these eight types of grasshoppers included one hundred different sub-species, so there were really eight-hundred different types of locust which swarmed over Egypt. (Midrash Sechel Tov records the same tradition, but instead of chanamal, it mentions tzlatzel (see below).) This mirrors the Talmud’s assertion (Chullin 63b) that there are eight-hundred types of chagav!

Radak gives us some insight into the meanings of the Hebrew words for grasshoppers mentioned by Joel. He writes that gazam are called so because they cut (gozez) the grain. Arbeh bear that name because of their multitudes (related to the word harbeh, “a lot”). The name yelek is related to the word melakek (“lick”) and focuses on this grasshoppers’ habit of licking and chewing grass. The prophet Nachum described yelek as a type of grasshopper that “spreads out and then flies away.” (Nah. 3:15) Based on this description, Malbim explains the yelek as a type of grasshopper that is originally born as a sort of worm, but then enters a cocoon from which it emerges as winged grasshopper. (After consulting with Ohr Somayach’s resident zoologist, Rabbi Richard Jacobs, I have been unable to confirm the existence of such a grasshopper.) The word chasil is given to another type of locust because those grasshoppers were said to “finish off” the remaining produce in Joel’s time. (The word chasal means to “finish” or “conclude”, like we say at the end of the Passover Seder, “Chasal siddur Pesach…” or at the end of a Tractate).

The Targum to Joel gives us the Aramaic words for the four species of grasshoppers mentioned by Joel. Gazam is translated as zachala (which literally means “crawling thing”, see Deut. 32:24 where it means snake), arbeh is govai, yelek is parcha (“flying thing”), and chasil is shmota. The Talmud (Chullin 65a) also offers Aramaic translations, specifically of the four types of kosher grasshoppers: arbeh is govai, sal’am is rishon, chargol is nipol, and chagav is gadyan. (See also Radak to Amos 7:1.)

I forgot to tell you about another possible word for grasshopper: Rashi (to Deut. 28:42 and Bava Kama 116b) writes that tzlatzel is also another type of grasshopper. Rabbeinu Bachaya (to Deut. 28:42) and in the commentary to Chronicles printed under Rashi’s name (I Chron. 13:8) explain that the word tzlatzel is related to mitzaltayim (“cymbals”) in reference to the clamorous noises associated with this type of grasshopper. Pirush HaRokeach adds that grasshoppers are related to the word tzel (“shade”) because when these invading pests swarm across the sky they cast a shadow over the earth below them.

Nonetheless, other commentators disagree with Rashi and explain tzlatzel differently: Rav Saadia Gaon writes that they are butterflies; Gersonides, that they are worms; and Nachmanides, that tzlatzel refer to the clamoring sound of enemy armies.