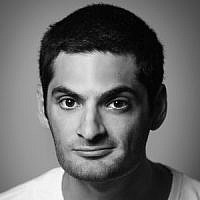 The Blogs
Yaniv Salama-Scheer
Apply for a Blog
Advertisement
Please note that the posts on The Blogs are contributed by third parties. The opinions, facts and any media content in them are presented solely by the authors, and neither The Times of Israel nor its partners assume any responsibility for them. Please contact us in case of abuse. In case of abuse,
Report this post.

The summer of 2007 was hot, even by Israeli standards, and the heat gave way to all kinds of irritations. The country was in a state of flux. Her citizens despaired, her politicians dug in, and the general mood worsened with each passing day. Solace was in short supply in those sultry days of summer, as thermostats climbed to record highs and prime minister Ehud Olmert’s approval rating nose-dived to embarrassing new lows.

The prime minister, armed with a 3% approval rating, was fighting for his political life as the fallout from the Winograd Commission – the panel charged with investigating the government’s handling of operations during the Second Lebanon war the previous summer – began to seriously threaten his premiership. In a rare flash of national unity Knesset members, newspaper editors, and voters alike, were calling on Olmert to quit. Amir Peretz, the Defense Minister during the war, had already been replaced by Ehud Barak in the Kirya, as well as at the top of the Labor Party list. Dan Halutz was out as chief of staff of the army, and Olmert and his foreign minister Tzipi Livni were the only holdovers from the war still employed. The country’s focus was on the squeaky clean Livni, who it was hoped, would be calling a press conference at any moment to call on her boss to quit and bequeath the party, as well as the country, to her. By the time her fateful and clumsy press conference rolled along a day too late, it seemed that Olmert would withstand the onslaught and hang on. Livni had waffled, Bibi had schemed, and all the while, hidden away from the public eye in Syria’s northeastern desert, Bashar Assad was a few clicks of a button away from making his North Korean made and Iranian financed plutonium reactor operational.

But the existential threat to the north, such as it was, was not on the public radar. When Israelis turned their collective gaze to the north, it was toward the cedars of Lebanon, anxiously scanning the horizon for signs of life from soldiers Eldad Regev and Ehud Goldwasser, held in captivity by Hezbollah. At the time, no one knew that they had both been killed during their abduction. There was hope that they would eventually return home to their families and not suffer the same fate as Ron Arad, and vanish into the thin air of the Beka’a Valley. Then there was the quiet, soft mannered Gilad Shalit, unknowing that he had become the most famous face in his country, as he sat alone in a dark, dank cell somewhere beneath Gaza City. Just like these soldiers in captivity, Israelis were locked in a prison of woe, from which there was no parole or escape. As August loomed, reports began to trickle in that perhaps, somehow, somewhere, there was a deal to be made to bring these boys home. Official and unofficial channels were opened, and resources in America, Europe, and the Middle East were being exhausted. Among the most active countries in the diplomatic process was France.

The French were aggressively trying to reassert themselves as players in the Middle East. In his first order of business in the Elysee Palace, president Nicholas Sarkozy of France dispatched his wife and his chief of staff to Tripoli, and secured the release of five Bulgarian nurses and a Palestinian doctor thrown in jail by Qaddafi. During his campaign, Sarkozy had embraced his Jewish roots on his fathers side, established a close working relationship with then American President George W. Bush, and read from a global security script that sounded like it could have been written by Israel’s own security establishment. The French were working both sides. Sarkozy was marketing himself as the only European leader who could deliver concessions from Arab leaders. His next move was to make a play for a real diplomatic coup – the release of Gilad Schalit. Schalit was after all a dual French-Israeli citizen. Sarkozy’s half-Jewish Foreign Minister, Bernard Kouchner, had already been working the back channels in Lebanon for quite some time, and had developed methods of dialogue with people who worked in and around Hezbollah. At that same time, the Quai d’Orsay, the French foreign ministry, was also trying to get a firm fix on Arcadi Gaydamak, the Russian born Israeli millionaire who was tied to an arms trafficking scandal in Angola in the 1990’s along side many prominent Frenchmen. As a reporter, there was plenty to talk about with Paris.

At that point I was well into my transition from eager intern to reliable reporter at the Jerusalem Post, and my fluency in French and familiarity with that country gave me a consistent beat to cover and sources to cultivate.

There was a two week period in July when I was on the phone with the Elysee or the Quai d’Orsay everyday, sometimes multiple times a day, chasing down details surrounding reports which stated that the foreign minister Kouchner had been told by Hezbollah representatives that one of Regev and Goldwasser was alive. Which one he was not told, but the living soldier’s life would be ransomed at a high price. I was trying to pump as much information as I could out of a well connected source I had built an excellent working relationship with, we’ll call him Pierre, who often provided me with information other reporters covering French diplomatic activity in the Middle East didn’t get. I had called him up with for some clarifications on the rumors about Regev and Goldwasser, left a message, and decided that since it was my first ever Tisha B’Av in Jerusalem, that I would go down to the Kotel for services.

The scene was overwhelming. There was a sea of people, Haredim, Hassidim, Hilonim, tourists, photographers and security, all crammed into the the Western Wall plaza. Bachurim were sitting on the floor in mourning, grown men were crying, it was a very emotional and inspiring sight, and I was completely caught up in it. As I wandered around taking it all in, my phone began buzzing in my back pocket and brought me back into a world I thought had been left behind at the office for the day.

“Hello?!?! Hello?!?!” I shouted over the noise of the crowd. It was Pierre returning my call.

“Hi Pierre,” I began somewhat hurriedly. “Listen, I can’t really talk now, I’m down at the Kotel for Tisha B’Av, can I call you back in the morning?”

It didn’t occur to me that he probably had no idea what the Kotel was, or what Tisha B’Av signified. Pierre was an inquisitive type, and sometimes over the course of our conversations, he ended up asking more questions than I did. This was one of those times. “Sure, pas de problem, we speak in the morning,” he said. Before I could hit the end button, I heard it.

I was certainly not in this conversation. My head was elsewhere. I was antsy, and I wanted to get off the phone. I didn’t want to start sermonizing on the meaning behind this day of mourning, that it was the day that God had decided that future generations would weep in order to commemorate past transgressions. That Israel as a whole on this day would relive the lost hope felt in the desert as they began to angrily follow Moses and question their faith. That because tears were directed inwards instead of toward the Heavens, that for one day a year the Almighty would not mend His children’s broken hearts. So I went with the thirty second ESPN highlight version.

“I’m at the ruins of the temple in Jerusalem. It was destroyed today, so people are coming from all over the country to mourn and to pay their respects.”

Pierre was a government official, not a ten year old attending Jewish day school and already well acquainted with the likes of Vespasian, Titus, and Rabbi Yochanan ben Zakai. There was dead silence on the other end of the line, and you could almost feel the panic sinking in on the other side.

“But the president was briefed on the Middle East this morning,” he began shakily. “Nobody mentioned this catastrophe.” and then it came.

“France strongly condemns the destruction of your Temple!”

It took me a second to realize what had just happened. And when I did, I tried to allay his obvious horror at the thought that his government did not act in the prescribed way, showing solidarity with it’s ally Israel in what was surely it’s most calamitous and traumatic day in it’s young history.

“No, no, Pierre. Nothing actually happened today. It was destroyed on this day 2000 years ago by the Romans. We come to the ruins on this day every year to remember what happened.”

Pierre was not happy. His heart was no doubt still his throat, and sweat staining his immaculately pressed French cuffs. But he found just enough composure to let me have it. “2000 years ago!,” he bellowed. “2000 years? Mais merde alors! get over it already!!” then I heard the click.