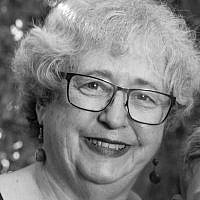 The Blogs
Jackie Goldman
Give without remembering; receive without forgetting
Apply for a Blog
Advertisement
Please note that the posts on The Blogs are contributed by third parties. The opinions, facts and any media content in them are presented solely by the authors, and neither The Times of Israel nor its partners assume any responsibility for them. Please contact us in case of abuse. In case of abuse,
Report this post.

The Gulf war between Iraq and the United States began in Saudi Arabia in the summer of 1990. Saddam Hussein threatened that Israel would be next and wisely taking his threats to heart, we began preparing for a massive life threatening attack.

Every building in Israel since the establishment of the State in 1948 had an underground bomb shelter in the basement or on the street nearby. These shelters, often neglected or used for storage, were cleared out when threats of attack were imminent. But preparation for the Gulf War did not simply mean cleaning and stocking a bomb shelter with water and snacks.  Hussein warned that the scud missiles aimed at Israel could well contain biological and/or chemical warfare.

Activity in the mask distribution centers was organized and orderly – and totally surreal. I stood patiently on a long line, much as I had done in Manhattan while waiting to buy discount theater tickets for a Broadway show. But instead of chatting with strangers about musicals versus comedies, we spoke about which room in the house we planned to use as our sealed rooms, and what provisions we would stock up on. (After the war, my sister joked about all the canned string beans that she bought, that she knew no one in her family would eat.)

My son and oldest daughter were in college in the States. I had such mixed feelings; I missed them terribly and wanted/needed them to be close to me, and yet I was so grateful that they were safe.

I talked with my younger daughters about how we would prepare our home for the impending war. We chose my bedroom with its double bed, television, and adjacent bathroom to be the sealed safe room. We stocked the room with supplies and taped up the windows, and added a mattress and extra bedding, in case we had visitors when the siren sounded. As we worked, we reviewed the instructions on what to do if a siren goes off when we’re walking on the street or riding in a car or on a bus – drop everything other than your mask, knock on the nearest door, follow the adults, ask for help.

I have no recollection of talking with the girls about fear, or what to do if we get hit. Were we in denial? Were we protecting one another by not talking about the horrors that we might face? I do remember my hands trembling as I put prayer books and Books of Psalms on the shelf over my bed.

My high school aged daughter insisted that I make her one promise. The boys from her youth group were assigned to one particular hospital to hose down people contaminated by chemicals. I had to promise her that under no condition would I allow an ambulance to bring her to that hospital!  I laughingly made that promise, firmly blocking out the dread of such a situation becoming a reality.

The first scud missiles landed in Israel at 2 a.m. on Thursday, January 18th, 1991. We were asleep when the ear-splitting siren sounded. None of our rehearsals and reviews of procedures had prepared us for the fear and adrenaline that charged through our bodies. Televisions and radios boomed the code words, “Nachash Tzefa! Nachash Tzefa!” “Viper! Viper!” This was the real thing – an actual attack! The girls ran into my room. We put on our masks, we taped up the door – and stood looking at one another….

The rest of the night is a blur. How long were we in the safe room before we heard the code words, “Sharav Kaved – Sharav Kaved” “Heat wave – Heat Wave” that signalled the end of each attack? How many missiles fell? Did we pray? Did we play games? Did we fall asleep together after each siren, or did the girls go back to their rooms?

Nachman Shai, the government media spokesman had a soothing and reassuring voice, which became the country’s sanity-saver as the war progressed.  Channel One, which ordinarily shut down at midnight, broadcast movies and entertainment shows twenty four hours a day. One of Israel’s classic comedy shows, “Zehu Zeh” (It Is What It Is) entertained us each evening with original spoofs and satires.

Homes, stores and office buildings left their doors unlocked for passersby to run inside in the event of attack. Children decorated their cardboard mask boxes in art class; schools were shut down a few days into the war.

Many overseas students went home for the duration of the war but most remained. The girls and I cooked and baked tons of food – on one Shabbat we had over 20 overnight guests, so we sealed off a second bedroom. But each time the siren sounded (there were two or three different incidents that night) everyone piled into my room. We recited some prayers and psalms, chatted, and play cards and board games. I had to replenish the snacks and drinks supply – but it was definitely worth it to have everyone together.

At the firm ‘request’ of the United States president, Israel’s military did not retaliate against Iraq. We are not accustomed to being victims and our national pride was bruised, but we complied. Over 40 scud missiles landed in Israel between January 18th and February 23rd; thankfully most fell in unpopulated areas. Two people were killed when their homes were destroyed, four suffered fatal heart attacks and seven suffocated due to incorrect use of their masks. Homes and businesses were destroyed – but Iraq was defeated, and Israel’s morale never waivered.

We celebrated the Holiday of Purim five days after the cease fire, on the fourteenth day of the month of Adar, . Purim commemorates the downfall of Haman, the wicked Persian prime minister who convinced the king to annihilate all the Jews in his kingdom. It is a joyous festival, replete with prayers, songs, gift giving, costume parties and street parades, delicious foods and flowing drinks.

“In the days of Mordechai and Esther, Haman the wicked …sought to exterminate the Jews – man, woman and child in the month of Adar. But You, in your abundant mercy, nullified his counsel.”

“G*D created miracles in those days – in this time”. In Adar 1991 we packed up our gas masks, put on our Purim masks, and joyfully celebrated a double dose of Purim.

About the Author
Jackie Goldman is a group facilitator, committed to helping people strengthen their resilience and coping skills following national and man-made trauma and illness. She trains mental health professionals, educators and community leaders in Israel and abroad. Jackie came on Aliya in 1986, and lives in Jerusalem.
Related Topics
Related Posts
Comments