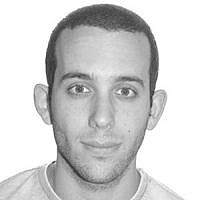 The Blogs
Sharon Zaks
Apply for a Blog
Please note that the posts on The Blogs are contributed by third parties. The opinions, facts and any media content in them are presented solely by the authors, and neither The Times of Israel nor its partners assume any responsibility for them. Please contact us in case of abuse. In case of abuse,
Report this post.

My grandpa, Mordechai Zaks, was born in the small town of Czestochowa on September 1, 1926. His childhood was suddenly interrupted when the Germans invaded Poland on the very same day he celebrated his Bar-Mitzvah. From that day forward, his life was forever changed. During the war he was transferred from one camp to another, until he was liberated from Buchenwald by the US army on April 11, 1945.

Afterwards, Grandpa made Aliyah and never looked back. He almost never spoke about this period. Once my father told me, that Grandpa held more of a grudge towards the Poles than the Germans; He felt more resentful toward the Poles. It didn’t surprise me. The Germans had shuffled into his town with their Panzer tanks, arriving as aliens from another planet, a foreign invasion from the unknown, without previous warning. It wasn’t hard to understand that they were his enemy.

The Poles, on the other hand, were a different story. They were acquaintances, neighbors, friends, peddlers in the market. They were supposed to share a common fate under the red Polish eagle. They shared a common language, culture, food and tradition, to a large extent. They were the seemingly friendly civilization, which had quickly shed its skin to reveal its true face. The Wehrmacht had brought a satanic, vindictive, furious and vengeful atmosphere to the streets of Poland. Very quickly, neighbors became informers, friends became enemies, and betrayal became a common phenomenon. Vengeful, virulent, Anti-Semitism that was hidden beneath the surface for long, quickly infiltrated the minds of many Polish people. With the formation of the first cracks in the armor shield, Jewish blood had begun to be spelled. Suddenly, aiding of the shedding of Jewish blood was not only socially acceptable, but encouraged. The events escalated so rapidly; The sequence of the events had managed to surprise every side in the story, including the Germans themselves. The rest is history.

Grandpa had never returned neither to Poland, nor to Germany.

The systematic extermination of 90-93 percent of Polish Jewry would not have been possible without the extensive cooperation of the Polish population with the Germans: 3 million people, out of 3.3 million. I do not like to use numbers to illustrate historical lessons, but in this case the facts speak for themselves. The dry statistics serve as a living testimony. There is no practical possibility to perform such a successful, effective and thorough genocide, without continued and systematic cooperation by the local population and authorities. This claim is supported both by stories told by the survivors, and by literature and research conducted in the field.

The Polish attempt to rewrite history is not a surprise. It’s a result of a complicated duality regarding the Polish role in WWII, as both perpetrator and a victim. Many Polish people had actively participated in the German killing machine; however, they were also one of the main victims of it. Many had extradited a large number of Jews to the authorities; but others also saved many of them by offering shelter, in most cases at risk of paying the ultimate price. Dealing with this complicated duality is difficult in reality. Collective minds and collective consciousness of nations are not designed to deal with vagueness or duality; they will strive to clarify the story and tell it their own way, the way that makes them feel better. It’s psychological phenomenon. A develop mechanism of dealing with a dark past doesn’t exist; no correct model is out there to teach the Poles how to do it right. Not even the Germans have it.

As a result, the Poles have chosen the easy way: from now on, they will portray themselves as the victims, and as the victims only. This newly shaped narrative looks somewhat like this: Germany put Poland on through hell on earth. Jews and Poles suffered its terrors together. We did much to save Jews: As a state, as civilians, as friends. Today, we are still on the side of truth. I didn’t invent these words. They were taken as they are from the very new Polish National Foundation campaign, which was created to justify the new Polish law. The campaign video ends with the Hashtag #GermanDeathCamps, to make it clear to the world who masterminded the killing machine.

Telling half the truth can be worse than lying. It’s unquestionable that the Poles were victims. However, the historical truth is that they were also collaborators, killers, looters, informers, commanders of forced labor units, executioners, torturers and sometimes just ordinary people who had stolen their neighbors houses and properties our of sheer opportunism. The new campaign, including the new law, tries to push these truths to the margins of history, where they could perish and disappear, until no one remembers them anymore.

It’s also important to remember that history is always written by the winners. Perhaps the Poles feel that because they were a part of the winning side, they have the right to rewrite the history their own way. After the fall of the Iron Curtain in 1989, and with the greatly reduced number of survivors that are still alive and willing to fight, they sense they have the political freedom to take certain steps. The political atmosphere of our days, in which lies, truths, half-truths, fake news and alternative facts are all mixed with accurate depictions, provides people and nations with the opportunity to tell their own desired storyline, regardless of the facts.

The Polish law is a result of a long-time process of forgetting and denying the inconvenient side of the past. It stems from a basic human need to deny guilt, to impose it on someone else, whenever possible. The Poles aren’t special in this case. Many nations with blood on their hands seek to be reborn by building a different narrative, cleaner, purer, and less guilty. It’s a classic method adopted by the perpetrators; The aggressor becomes a victim of the circumstances. The collective conscience does not give peace.

A similar process is taking place in other European countries with a similar past, but mainly on the socio-cultural level. However, the Poles were the first to take the process one step further, to the legislative arena – and that’s a frightening step that borders on Holocaust denial.

The most important lesson in history is that those who do not learn it are doomed to repeat it. History has amazingly original ways of repeating itself, both as tragedy and comedy, to teach the same lessons over and over again, often the hard way. No nation is immune to it. Not even a nation as strong and proud as Poland.

About the Author
Sharon Zaks is a lover of travel and adventure, and after doing a tour of the world, finished a degree in Business and International Relations from Hebrew University, and is working on his masters at the Interdisciplinary Center. Through his travels, he realized the importance of defending Israel, and became passionate about it. Sharon is a lover of history, culture, art and music, and he's playing several instruments.
Comments
Advertisement