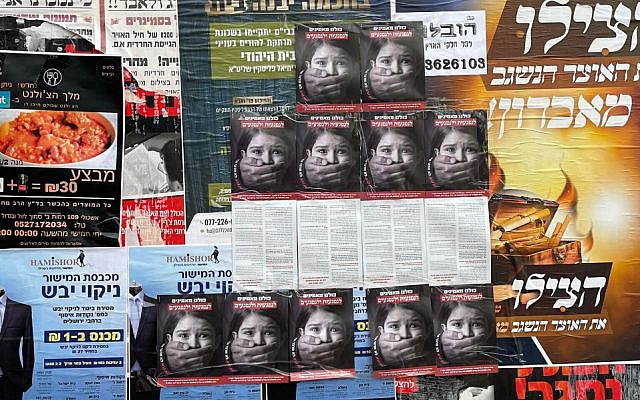 'We believe victims' fliers placed on billboards of a Haredi neighborhood on December 31, 2021. (Courtesy)

The Chaim Walder affair is not “just” a shocking case of a prominent public figure, a Haredi educator, whose shame, hypocrisy, and wickedness were exposed — there are many such cases, in all sectors. Nor is it “just” a reminder of the extent of the life shattering phenomenon of sex offenses in the Haredi sector — these are, unfortunately, common everywhere. The affair has the real potential to effect fundamental change in the fabric of Haredi society.

The Haredi sector’s remarkable growth since the founding of the state is the result of a successful strategy adopted by its leaders. First, self-segregation from Israeli society on all levels of life and fortification behind “walls of holiness.” Second, providing an alternative to civic leadership through the glorification of a rabbinical leadership whose authority derives, ostensibly, from a heavenly source.

The meticulous self-segregation and stringent adherence to leadership directives that boast da’at Torah (infallible religious authority) have been a force multiplier vis-à-vis Israeli society. They have enabled the Haredim, against all odds, to preserve their unique identity, and, at the same time, become a major factor in Israeli society. But nothing lasts forever. The Haredi strategy, with its two components, is rapidly losing its power.

Self-segregation is made possible through control over the shaping of communal consciousness. In recent years, however, dictators of the hashkafa tehora or “pure view” in the community’s synagogues and yeshivot, in its sectoral press and street-posted broadsides, have encountered a formidable adversary — the Internet. This is a modern Tree of Knowledge, available to everyone. Haredim can choose whether to bite into the apple (or the device of a competing company). It turns out that they are gulping with gusto: about two-thirds of them are connected to the Internet. A mighty digital battering ram is striking the walls and undermining their stability.

And then comes the Chaim Walder affair, which puts the second component of the Haredi strategy — the leadership — to the test: The paragon of Haredi education, a figure known and admired by the entire community, turns out to be a sexual predator. The blood of his many victims is boiling. This was not an unconventional Haredi like Yehuda Meshi Zahav, the disgraced founder and chairman of ZAKA who was similarly accused of rape and sexual assault within the Haredi community, but rather a role model for the community — a decades-long spokesman for the “pure view” in the Lithuanian Haredi newspaper Yated Ne’eman. The crisis is huge. How will the leadership respond?

Some of the leadership looked this religious and moral evil in the eye, and averted its gaze. Yated Ne’eman has used the honorific acronym “zt”l” (his righteous memory should be a blessing) in regard to this man with blood on his hands. One of the most revered Lithuanian rabbis accuses those who revealed Walder’s wrongdoing of murder. This outrageous inversion of the truth is a sin that will bring its own punishment.

The sin is easy to identify: the Haredi leaders who are abandoning Walder’s victims are violating an explicit prohibition: lo ta’amod al dam re’echa — “Do not stand idly by while your brother’s blood is at stake.” The Torah sets a standard for the moral conduct of religious leadership in the case of the egla arufa — the decapitated calf. It says that if the corpse of a murdered person is found in a public area and it is not known who the killer is, the local leadership — the “elders” of the nearest city — are responsible for conducting an atonement ritual and declaring “Our hands did not shed this blood, nor did our eyes see it.” The Sages ask: “Would it ever enter our minds that the elders of the Beit Din (tribunal) were murderers?” However, because the crime took place “on their watch,” they are required to perform an educational and moral act of purification. Such measures are called for all the more in the Walder affair when the criminal’s identity is known and when he himself is regarded as a leader of that community.

And now for the punishment: the Haredi public recognizes the sin. The fraudulent crime of some of the Haredi leadership, having surrendered to their fears, is clear to its adherents. Brave glimmers of this recognition can be seen everywhere – Mishpacha Magazine and Radio Kol Chai are especially worthy examples.

Rabbi Saadia Gaon (in the 10th century), explaining the responsibility placed on the elders of the nearby city, states that “just as it is proper to castigate one for doing what he ought not have done, so should he be castigated for neglecting to do what should have been done.” The elders described in the Bible neglected their duty to safeguard the murder victim. Today’s elders are neglecting their duty to protect the victims.

The Haredi public is shaken; many understand, and strongly support, what is written here. It may be that, alongside the suicide of Chaim Walder, we are witnessing the “suicide” of some of the Haredi leadership.