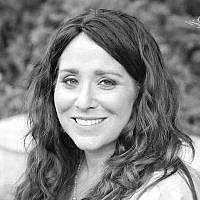 The Blogs
Micki Lavin-Pell
Apply for a Blog
Please note that the posts on The Blogs are contributed by third parties. The opinions, facts and any media content in them are presented solely by the authors, and neither The Times of Israel nor its partners assume any responsibility for them. Please contact us in case of abuse. In case of abuse,
Report this post.

The sorry Harvey Weinstein scandal has at least enabled a whole slew of women to be able to stand tall and proud and confront a very private and hidden personal demon – that of being persecuted by “sleazy” men who objectified them for their own personal benefit. So this story became the catalyst for women who had been victims of some sort of sexual harassment to confront their feeling of victimization.

The #metoo social media campaign has highlighted the magnitude of people affected by different types of sexual harassment. This has really been eye-opening and has certainly enabled women to try to reclaim their power and to ensure that this sort of thing become a thing of the past – something never to be tolerated again.

One thing we may be forgetting however, is that no matter how much we educate about the injustice of objectification of women, we can’t erase the fact that some men don’t actually care. There are some men that you can talk to about the impropriety of their behavior until you’re blue in the face, yet they’ll walk out of the room and continue in their merry, albeit revolting way, because it suits them. They don’t care one iota about the repercussions of their behavior.

But at the same time as we accept this uncomfortable fact, we also have to acknowledge the opposite side of the spectrum – the one that is populated by normal, decent, upstanding men; The sort of men your mother wants you to bring home, and the kind both want to father her grandchildren! These men are shocked and appalled by the behavior of the sleazy members of their gender.  They are embarrassed and ashamed knowing that other men can behave in such an unacceptable way.

As an outcome of the Weinstein affair and others like it, these decent men are becoming increasingly confused and frustrated – although they might not even know it. They feel emasculated and their confidence to approach women is on a downward spiral. Women, as a result, struggle to feel attracted to these “good” men, as these males are guarding themselves so much that to the opposite sex, they’re no longer sexy.

An associated unwanted victim of this scandal that affects both genders is the increasing discomfort associated with natural friendships and flirting.  Men and women may now be more afraid than ever to flirt and show interest in one another.  There needs to be some sort of safe way to show interest and attract members of the opposite sex in a way that is acceptable under the new framework that is being constructed around the affair.

This is the other side to the many, many good things that have come out of this sorry episode – That the “good men” now feel that they may have to hang under the radar in order to avoid suspicion. Additionally, many women now feel they can no longer trust men. As much as they very much want a male partner, many feel this is something they must forgo as they fear violation.

I am in no way delegitimizing women’s needs to feel strong and positive about reclaiming their voice and no longer feeling ashamed about what they have endured. I fully encourage all women who have been in similar situations to confront their perpetrators and let them know how wrong they were.

But we now need to find some way to readjust the balance so that we can inspire and encourage the majority of the male gender – the “good”, non-sleazy and decent men – to come out and shine.

One suggestion I would like to make is that women could start to share their positive experiences with men. If we focus on our positive interactions with good, trustworthy men, I believe all of society will heal better from this experience. Let me throw in the hashtag “#notthem” for a starter!

Let me start the hashtag by praising two men I trust completely, my father, Rabbi Alan Lavin and husband, Dr. Gaby Pell for their help with editing this article. #notthem

About the Author
Micki Lavin-Pell is dedicated to helping Jewish people everywhere create healthy and successful relationships for more than 15 years. She's a Marriage and Family Therapist in Private practice. Micki, her husband and 3 children made aliyah from Melbourne, Australia in 2008. They had their first sabra in 2015.
Related Topics
Related Posts
Comments
Advertisement