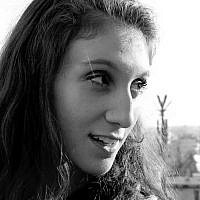 The Blogs
Lilia Gaufberg
Apply for a Blog
Please note that the posts on The Blogs are contributed by third parties. The opinions, facts and any media content in them are presented solely by the authors, and neither The Times of Israel nor its partners assume any responsibility for them. Please contact us in case of abuse. In case of abuse,
Report this post.

Siena, Italy, January 2015: I could sense her trepidation as she opened the door. It was clear that she employed caution in her interactions with her surroundings. All around Siena were testaments to the anti-Semitic sentiments that have long festered in Europe like an open sore, waning and waxing, never fully disappearing. A magnificent walled city in the heart of Tuscany, Siena’s medieval history and attitudes had been transformed into a 21st century context, making the city a living, breathing museum.

As soon as I smiled, the tense expression on her face loosened, and she grinned warmly in return. She opened the door wider, welcoming me into the synagogue, her place of work and her house of worship.

“Hello, Lucia*, my name is Lilia. I met you last week. I am studying here in Siena for the semester. Would you mind if I asked you about your experience living as a Jew in Italy?”

A look of slight confusion dawned on Lucia’s face. She seemed unsettled and surprised by the fact that someone was asking her to give herself to the amplified vulnerability that came with being Jewish and talking about it.

I exited the synagogue an hour later, my mind reeling.

As I followed the path towards my apartment, I caught a harsh streak of black paint out of the corner of my eye, and glanced up. A swastika defaced the smooth grey stone of the wall. My heart pounded, but I kept walking, until I stumbled upon another swastika, this one smaller but bolder, a few feet ahead. I moved faster in an attempt to leave behind the barriers that suddenly felt suffocating, until on my right, I spotted yet another swastika, this one in a violent red paint. It became even clearer to me why the synagogue in Siena is inconspicuous and tucked away from the rest of the city.

The front entrance to the synagogue in Siena.

Siena, Italy, 1348: The thriving banking city had fallen victim to the deadly Black Plague, which wiped out about 80 percent of the population. The lie that the Jews were the origin spread like the Plague itself. As a result, they were banished to live outside the center of the city.

Siena, Italy, 1571: The grand duke of Tuscany, following the wishes of the Church, established the Jewish ghetto in Siena. Jewish men were forced to wear yellow caps, women yellow scarves, and every Jew had to pay a special tax. They were quarantined and stigmatized, put into a neat box created by the city’s stone walls, because their identity was one of diaspora.

Siena, Italy, 1799: Napoleon Bonaparte’s occupation of Siena brought with it a lifting of restrictions for the Jewish population. However, a few months later, rioters from nearby Arezzo came and pillaged the ghetto, sending it up in flames and killing 19 Jews. This was the beginning of the whittling Sienese Jewish population each century following:

The hidden synagogue and the nails in the stone on the way to the ghetto where the heavy doors used to close at night are the only pieces of proof that they ever existed.

Siena, Italy, 1943: German troops, with the allowance of the Italian Social Republic, stormed Siena and arrested nearly a quarter of the remaining Jewish population, and deported them to Auschwitz.

Italian Jews are a unique facet of world Jewry; they do not consider themselves to be Ashkenazi or Sephardi. Instead, they are something else entirely, a brand of their own. Many of these Jews have been a part of Italian society, for better or for worse, since the time of the Roman Empire, barely functioning on the fringe of the general public and keeping their identity locked behind the bolted doors of their temples.

Siena, Italy, May 2015: It is my last week in Italy. Over the course of the past four months, I realize that I have only met three people native to Italy who have openly identified themselves as Jewish. They spoke about their heritage with caution and heaviness, and I began to become aware of how lucky I am to be a Jew in America, where I can wear a Star of David around my neck, where I can sing Hatikvah in public, and where I can openly express my love for my home, Israel. I may run the risk of being confronted by bigoted individuals now and again, but for me, being open about my Judaism and about my Zionism is simply an issue of possibly being disliked; for Italian Jews, being open about their Judaism or their Zionism is a threat to their survival.

Ironically, most of what I learned about Italian Jewry was not through their voice, but through their silence, and even as a non-Italian Jew, I felt silenced as well. In the USA, I don’t hesitate to wear an Israel Defense Forces T-shirt in public, or to carry around an Israeli flag on Yom Ha’atzmaut (Israel’s Independence Day), or to openly say the few Hebrew expressions that I know to my friends out loud. However, in Italy, I found myself tucking my Israeli flag into the bottom drawer of my bedside dresser and stuffing my Israel Defense Forces T-shirt into the back of my closet. It wasn’t because I was ashamed, embarrassed, or hesitant to stick out; on the contrary, 2015 has been my proudest year being a Jew thus far. I put the biggest piece of my life away for four months because I feared for my safety, and because publicly baring my love for my heritage and for my land was not merely a bold statement that may cause a few ignorant people to give me dirty looks; rather, it could be something that would potentially put me at risk for serious harassment and even physical harm, and I felt as though I could be a much better advocate for my people if I came home to the United States in one piece.

Every time I contemplated displaying my Zionism loud and proud for all of Siena to see, I remembered those swastikas, the paint still new and fresh. I re-played scenarios of Jew-bashing I had heard on the streets, in bars, and in the middle of café’s. I recalled my friend telling me about the anti-Israel riots that she had witnessed in Italy last summer, during Operation Protective Edge, that had enveloped parts of the country in violence. As I took everything in, I finally felt as though I had begun to understand, more and more, what European Jewry as a whole has had to put up with. I saw the stark contrast between the hanging heads of the Jews of Siena and the proud and bold Jews of America and Israel, and imagined what would happen if each Sienese Jew drove three hours to the Rome airport, jumped on an El Al flight, and found themselves, barely four hours later, in a land in which they were free and encouraged to be themselves.

So, to my fellow American Jews: next time you hesitate to speak about your Jewish identity or about Israel, think about the hidden synagogue of Siena, about the silence of European Jews, and hold your head high. Sing ‘Am Yisrael Chai’ a little louder, say your prayers with passion, sport your blue-and-white with chutzpah, and wear your Star of David with pride.

*This person’s name has been changed to protect her privacy.

About the Author
Lilia Gaufberg is a 24-year-old elementary school teacher. She grew up in Boston, USA, but recently made Aliyah to Israel after spending a year teaching English in Petach Tikvah. She will be drafting into the Israeli Defense Forces as a lone soldier in December of 2018. In addition to writing, Lilia enjoys making art. You can check out her art page on Facebook at: https://www.facebook.com/ArtbyLiliaRebecca/
Comments