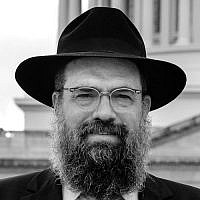 The Blogs
Levi Shemtov
Apply for a Blog
Please note that the posts on The Blogs are contributed by third parties. The opinions, facts and any media content in them are presented solely by the authors, and neither The Times of Israel nor its partners assume any responsibility for them. Please contact us in case of abuse. In case of abuse,
Report this post.

Much has been written over time and especially recently, after Sheldon Adelson’s passing, about his and his wife Miri’s unusually significant contributions in the arenas of Jewish philanthropy and politics.

It’s perhaps best for me to leave commentary in those two arenas to those more involved. As for me, the most impactful of these two giants has been their strong and unshakable personal pride as Jews, reinforced by an unusual humility all too rare in their echelon.

For years, Sheldon and I would speak regularly – about every other week on average – sometimes for just a few minutes before Shabbos, other times much longer to discuss various topics of Jewish interest and challenge. Only about once a year did we discuss funding, which he and Miri generously provided to help fund the National Menorah on The Ellipse, across from the White House – a decidedly non-political or partisan effort, which is seen and enjoyed by tens of millions across the country every year.

One time, I asked whether he could consider a different contribution – not of funds but of time – because we were bringing together about 150 Jewish students and young professionals in our nation’s capital for a “Generations Connect” event, where we present opportunities for those who are young emerging leaders on campuses and in our community to interact with those who have achieved prominence in whatever field.

I have seen so many times how these events are literally life-changing for the young and ambitious participants, and a delight for those figures we bring to interact with them, at their sight of a new generation committed to a strong Jewish future.

Over time, we’ve had numerous peadong Jewish personalities, including members of the Cabinet, senior administration officials, leaders in commerce, academia and the arts, ambassadors to and of the US, international financiers, military officials, congressional leaders and members, etc. Each had made their own mark, and it has been personally uplifting to watch them share their experiences and answer questions.

So, I asked Sheldon for some of his time. On his birthday not too long before, when we discussed what he could possibly want that he didn’t yet have, he answered “I want to connect this generation of Jews to the next.” This seemed like a good opportunity. He graciously agreed to meet the group and despite not feeling so well on the confirmed day, kept his commitment and joined us as planned.

Over the course of an hour and a half, both presenting and taking questions, he literally blew everyone there away with his very deep personal and unwavering commitment to Jewish survival and wellbeing. As requested, he even stayed apolitical almost the whole time, save for when he respectfully excused and delved into politics for a few minutes but perhaps seeing my anxiety, thankfully returned quickly to the subject matter.  We had specifically invited participants from “both sides of the aisle” for an “apolitical” and “personal” discussion…

And personal it was. He spoke of being beaten up as a child on the way to school in the Boston suburb of Dorchester, a problem he addressed by then walking with friends in groups of four to “square off” if and when necessary to defend themselves. A little later in life, in what was to become an important event for him, a friend with whom he was dining, and who was oblivious to Sheldon’s Jewish identity, pointed out someone across the restaurant saying, “you know, he is a Jew”. The person he pointed at didn’t identify as Jewish, indeed his family had sadly converted away from Judaism many years before. But Sheldon shared that it was at that moment when he realized that no matter what, one cannot ever escape their Jewish identity, and that if he would be “identified” as a Jew and held accountable for it, he wanted to be a Jew.

And he exhorted all present to do the same.

He told of how his father was very poor, and he and his siblings were able to attend summer camp for just one week and only because of the generosity of the local Jewish Federation. His father spoke of going to Israel but couldn’t afford to. At the time Sheldon couldn’t yet afford to send his parents, either, and when he could, they were already too old to travel. So, he shared how after his parents passed away, he took a favorite pair of his father’s shoes (they wore the same size) to Israel with him and walked a park there while wearing them, so his fathers shoes would indeed walk the soil of Eretz Yisrael. And when his wealth allowed, he and Miri heavily funded “Birthright Israel” so that anyone Jewish could go to Israel regardless of their financial ability, specifically on their own with friends of the same age. He wanted to ensure there would never again be anyone who didn’t visit Israel due to lack of resources.

There is no doubt that Birthright Israel has made a huge impact on the young Jewish community. I personally know of many people who (discovered and) made serious commitments to their Jewish identity and increased observance, some completely, as a result of a birthright Israel trip. The polling indicates that almost no one goes and is unaffected.

While he didn’t personally identify as strictly observant, he spoke emphatically of the need to marry Jewish, and his family’s habit of having Shabbat Dinner every Friday, complete with Kiddush and Motzie recited by his sons. Jewish values, customs and traditions are key, he reiterated.

When asked what he would like his legacy to be, he said he would prefer that people remember him as acting like a mason, mixing the cement which joined one generation of Jews to the next. And that his family would continue his and his wife’s philanthropic pursuits.

Personally, I feel the Adelsons have actually managed to refocus the larger Jewish philanthropists and philanthropies – intentionally or otherwise – to give more support to Jewish causes in Israel and the Diaspora in recent years (similar to what Bill and Melinda Gates and Warren Buffett, by personal example, did for philanthropy generally.)

Back to Sheldon’s parents, who he related were so poor they had no money (of their own) saved to leave him, despite his personally funding them as lavishly as they would allow. “But” he said, “my parents left me as rich as could be in terms of values” He urged the young people present to pursue their discovery of Jewish values important to the Jewish people and live them.

He passionately underscored the critical importance of Jewish learning and observance of traditions. His own time for learning had basically ended, he said. “But”, he said to great laughter and applause “I’ve thought of going back to Business School and getting an MBA…”

It was indeed an inspiring conversation. As a rabbi, I felt he had deeply touched those attendaning in ways a rabbi never could, personally and emphatically stressing the need for strong, proud Jewish identity in “the real world” and showing by example how one can reach the heights of their industry or profession without abandoning that identity.

On the contrary, it reiterated his answer about what he wanted on his birthday. Not another huge complex developed, or an even more significant profit, but simply to join two generations of Jews with strength and pride. The feedback from the event’s participants only confirmed this was well accomplished with the group.

I must also say a word or two about his legendary humility. I once sent them a gift for Purim, which was promptly returned by his office along with a polite note saying the Adelsons do not accept gifts from non-profits and we should please offer it elsewhere. Next time we spoke, I asked him why he had it returned it, and explained that the gift had an important message. It contained a beautiful scene of the Purim story, and I pointed out how the message of Jewish pride inherent in Mordechai and Esther is exemplified by him and Miri and I wanted that gift to serve as a significant spiritual reminder of their impact on the Jewish community. “In that case”, he said, “I apologize. Please send it back to me again, and I will humbly accept it.”

Anyone who has ever encountered the Adelsons in a public setting such as Jewish event or conference, would see Sheldon and Miri – who could hold company with just about anyone they wanted in whatever rarified environment – humbly and graciously greeting so many people seeking their attention, whether for a few quick words or a memento photo with one of the world’s wealthiest people. Miri would always be smiling at whoever it was, posing with and encouraging them with a few warm words while they waited. As I saw it, he seemed to relish connecting with people who harbored all types of dreams for their own futures, like he once did for his. Who knows how many people he gave hope just by saying hello to them for a few moments.

At the students and young professionals event mentioned above, Sheldon retold how his father taught him the meaning of the name Adelson, German for “noble son.” He said as far as he was concerned, if he lived like a Jew, he was noble. He then encouraged those present to appreciate how if they lived to help others and know to protect the Jewish people, they would feel noble as well.

He showed by example how, while money can make you wealthy, a purpose in life which you achieve helping and strengthening the Jewish people, and getting others to achieve that as well, makes one truly rich. He has helped fortify the Jewish journey of thousands he never met, and I truly believe he was satisfied that over the course of his life he achieved this purpose.

So, my deepest heartfelt wish of comfort and consolation to his family, noble (“adel”) in name and deed.

And I offer my deepest prayer that his burning lifelong desire for a proud, Jewish people and a strong Israel continue to be realized, until the moment heralding our ultimate redemption, when the pains of our time will evaporate and an era of true harmony and happiness will be upon us all.

But for now, Sheldon, I end as we closed so many conversations: (Shabbat) Shalom, and warmest regards to everyone. Pray for us all. Am Yisrael Chai!

–
Rabbi Levi Shemtov is the Executive Vice President of American Friends of Lubavitch (Chabad) in Washington.

His book, Capital Sparks, is due to be released in Spring 2021.

To see a video clip of the conversation referred to above, please go here.

About the Author
Executive Vice President of American Friends of Lubavitch (Chabad) - the mandated representative entity in the nation's capital of the international Chabad-Lubavitch movement, with over 4,000 branches in 50 states and 100 countries. Born in Philadelphia, PA and currently residing in Washington, DC
Related Topics
Related Posts
Comments