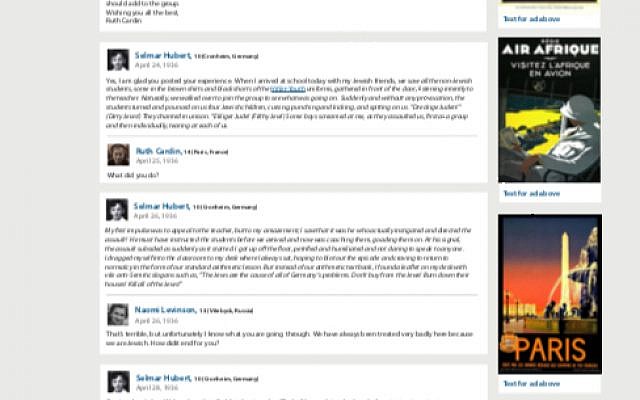 One could safely say every year that Holocaust commemoration and education has never been more important. That’s especially as the past generation of survivors — those who are first-hand witnesses to the unspeakable horrors during which six million Jews were murdered — age and die.

Yet, as much as it has been incredibly important every year to remember and educate about the Holocaust, this year it is in fact more important than ever. This year, the Polish government passed an outrageous law criminalizing public statements affirming Polish participation and complicity in the murder of some 90 percent of pre-war Polish Jewry, in Poland, where the Nazis “perfected” their murder industry.

I came across a poll of college students surveying basic knowledge about the Holocaust which displays alarming ignorance about basic facts, places, and terms. It’s dismaying, but not really so shocking.  Albeit that survivors still live among us with their tattooed concentration camp numbers wrinkled and fading, given the proclivity of students attention span limited to Twitter’s 280 characters, Facebook’s “likes” and Snapchat and Instagram, how can one expect this generation to know, much less process the systematic murder of six million people, generations ago, and in a time and place that for many is unimaginable.

Last year, I attended a teen Yom Hashoah (Holocaust Memorial Day) program, and everyone who was there was disinterested. The speaker was the daughter of a survivor, but everyone, including me, I’m embarrassed to say, was wondering…”when will this be over?” On my way home I thought — there must be a better way to make these tragic events more real and relatable for my generation.”

Survivors, whose firsthand accounts have always been so mesmerizing, are dying each day, leaving it to others to tell their stories. Sadly, something is lost when it’s told by the next generation.”

What can be done to help make the Holocaust relevant and understandable to her generation?

My generation are digital natives — kids who see the world in tweets and posts, growing up on Facebook, Instagram, and with a powerful tool — the smart phone — in our hands from the day we are born. We’re used to receiving information in a fast-paced visual format, so it’s not surprising that sometimes, old ways of learning about history don’t capture our attention.”

Among this generation, one wonders how it is even possible that Europe’s Jews were either ignorant or in denial about events that took place in their own backyard. How did they not know what was going on and flee, like refugees flooding Europe and North America today?  How did they not organize escape routes or even aggressive resistance to the Nazi when today any less significant cause can go viral in minutes?

The expectation of everything being communicated instantaneously including news and rumors, underscores a proclivity among Carly’s generation that the Holocaust is far too complicated to comprehend.  It’s literally unimaginable that with endless information at one’s fingertips, today’s students not only can’t imagine the horrors, but also can’t imagine how the world didn’t know or, worse, knew and didn’t respond.

Like the activist history in her family, Carly decided to do something. Accounts of the Holocaust is a clever play in words and a new way to relate meaningful and real stories of the Holocaust using the ubiquitous platform, Facebook.  She is creating an on-line graphic narrative — real accounts of the Holocaust in a familiar contemporary format; as if Facebook existed in the 1930s and 1940s. She is integrating actual words of survivors along with historical narratives, and modern likes and shares. 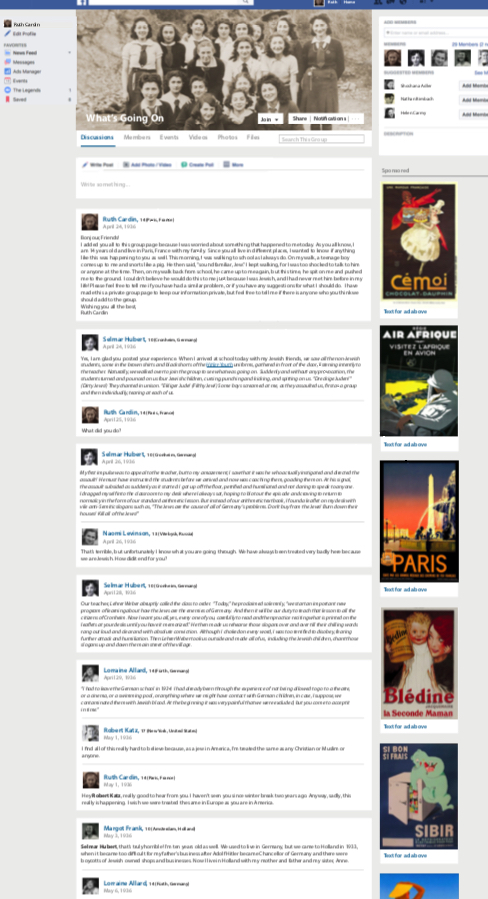 “Imagine if you were friends with Anne Frank and followed her on Facebook, posting while in hiding. Imagine posts from her and others like her between 1936 and 1945. Imagine if survivors’ stories unfolded like our stories do, on a Facebook group page.” She asks rhetorically, “You’d be hooked, right?” Ultimately, Carly wants “a younger generation connect to the Holocaust and learn about it in a new and exciting way.”

Managing her own demanding school work and serving as CEO of Accounts of the Holocaust, Carly engaged the Johannesburg Holocaust & Genocide Centre to research and assemble hundreds of stories taken from the testimonies of actual survivors. Laid out in a Facebook style format, the interactive narratives could then be read in printed form, or accessed on-line with links to more information on people, places, and events. Carly is dreaming big, “I even envision delivering content day by day to give the sense of events unfolding in real time.”

While work is underway, as CEO, Carly is also responsible for raising funds to make it all possible. Initially she needs $50,000 but ultimately needs much more, once the prototype is created and launched, and she and others realize the many other potential directions the project can go. Carly is receiving tax deductible donations here.

Other financial needs will be PR and marketing and eventually the ability to go deeper by clicking on any number of highlighted key words to get more information about a specific event, person, or concept.

In short, she’s identified and filling a niche that will be invaluable to her peers.

By way of full disclosure, I am not just enamored with the project and its importance and urgency. I am enamored with Carly, and have been since she was born. That she’s my niece gives me a front row seat as she takes personal stories of our own family, survivors and those murdered, a defining part of our family’s history, and weaves them together with stories of others, in a format that her peers and a young generation can understand.

As we commemorate Yom Hashoah in 2018 with Carly’s vision at its early stage, I pray that a year from now thousands and more will have begun interacting with this most innovative modern vehicle to teach lessons of the past that we must never forget.

For information or to help, “friend” Accounts of the Holocaust.

About the Author
Jonathan Feldstein made aliyah in 2004, married and raising six children in the Judean mountains. He is a long time Jewish non-profit professional. As president of the Genesis 123 Foundation he works closely with many Christians who support Israel, building bridges in ways that are new, unique and meaningful.
Related Topics
Related Posts
Jonathan Feldstein
Comments