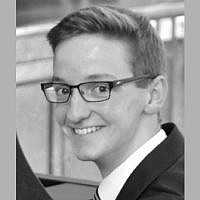 The Blogs
Jack Pepper
Apply for a Blog
Please note that the posts on The Blogs are contributed by third parties. The opinions, facts and any media content in them are presented solely by the authors, and neither The Times of Israel nor its partners assume any responsibility for them. Please contact us in case of abuse. In case of abuse,
Report this post.

News recently emerged of a video game in development that allowed gamers to play the part of Nazi guards deciding which prisoners stood before them would be sent to the gas chambers. Players can alternatively choose to be prisoners, rebelling against the guards. The Cost of Freedom trailer shows grotesque scenes of burning bodies and deceased prisoners lying on camp fences; at one point in the promotional video, the words “Choose whose side you’re on” fill the screen, whilst the phrase “Polish dogs” is also used in the trailer.

This advert caused a minor tremor in British media; in Poland, it has caused much more significant outrage, with the game being investigated by officials for insulting Poland. But why should this video game  cause an outrage only in Poland? Why has this game not been at the centre of the debate about understanding the Holocaust, here in Britain too? The Holocaust’s impact was not confined to a single country, and antisemitism continues to run rife around the world today. Why has this outrageous video been mentioned and forgotten? Why must we turn our heads away once again?

This video game  is a disgusting example of a growing problem today: a widening lack of empathy with the victims of the Holocaust, and a growing disdain for those who seek to defend them. Last month (November 2018), the world commemorated 80 years since Kristallnacht, the Night of Broken Glass, in which Jewish buildings in Nazi Germany were grossly vandalised and Jewish people imprisoned. Surely that was a sign of things to come? But still, people looked the other way. Kristallnacht was a portent, showing that words – vitriol directed at the Jewish community – were escalating into widespread action. When we look back on the Holocaust, it’s easy to immediately think solely of concentration camps, but words and ideology were as much a part of the Holocaust as the killing itself. The Holocaust started with words.

These words were borne out of a total lack of empathy for our fellow human beings. The Nazis didn’t see Jewish people as human beings, and this dehumanisation is only perpetuated by this video game . Holocaust charities like the Holocaust Educational Trust (HET) have been working tirelessly to remind us that the victims of the Holocaust were normal people, individuals each with their own family, career and aspirations. This video game  trashes all of that, and instead shows Jews only as prisoners, as the playthings of a Nazi, as a small figure in a very large crowd.

The video is also borne out of ignorance. According to reports, the game made references to ‘Polish death camps’; the concentration camps were not Polish, nor were they even German, as that implies the modern nation. The concentration camps were Nazi. Nazi does not equal German, nor does it equate to the territories they occupied. The phrase ‘Polish death camps’ highlights a worrying lack of understanding in the public discourse related to the Holocaust; despite what people claim, there is still much that is misunderstood about the Holocaust. The Holocaust started with ignorance, because a group of people didn’t understand another. This video game  trailer shows a dangerous parallel with our past.

Faced with international consternation and an investigation in Poland, you’d hope the developers of this game would do the decent thing and accept the offensiveness of their idea. But no. Whilst the game developer took the trailer down, it also released a defensive statement in which they declared they had been “forced” to stop the production of the game due to “misinformation” in the media.

We live in a time when uncomfortable truths can be easily dismissed as fake news, when all claims of antisemitism and bullying are written off as smears, where evidently offensive actions are downplayed and the claims of offense against them being the ones that are called out. The company’s casual response to a video that has understandably caused distress underlines their total lack of empathy. It isn’t very hard to comprehend how a video that uses phrases like “Polish dogs” and allows you to pick prisoners for “disinfection” could be seen as tactless and insensitive.

This isn’t about politics, about whether we agree with modern-day Israel’s actions or whether political pots are being stirred to make Mr Corbyn squirm. This isn’t about over-sensitivity, people being over-protective of a certain period and people. This is about common decency and understanding, empathy and sensitivity towards our fellow human beings. The industrial-scale mass-murder of six million people has nothing to do with entertainment.

The Holocaust started with words. It started with a lack of empathy and ignorance, which in turn spawned intolerance. Intolerance led to violence. It doesn’t take a genius to see where words can lead, and what can happen to the sections of society that are misunderstood and misrepresented. In an age of ‘fake news’, the Holocaust reminds us of what can happen when poor words and misrepresentations are not consistently challenged. This video game  is a disgrace, an example of a total historical disconnect and a lack of empathy for the millions who were affected by the Holocaust. The Holocaust is not a playground, and we should be shouting that at the top of our voices.

About the Author
Jack is a composer, writer and broadcaster, and is an Ambassador for the Holocaust Educational Trust, having visited Auschwitz-Birkenau with the charity in November 2016.
Related Topics
Related Posts
Comments