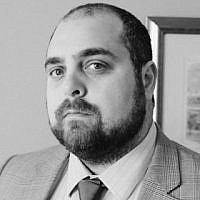 The Blogs
Matt Sienkiewicz
Apply for a Blog
Advertisement
Please note that the posts on The Blogs are contributed by third parties. The opinions, facts and any media content in them are presented solely by the authors, and neither The Times of Israel nor its partners assume any responsibility for them. Please contact us in case of abuse. In case of abuse,
Report this post.

After a weekend of controversy, White House Press Secretary Sean Spicer was no doubt well-prepared on Monday to explain why the President had removed any mention of anti-Semitism in his statement on Holocaust Remembrance Day. Spicer began by reiterating the counter-intuitive notion that by ignoring the near annihilation of European Jewry, President Trump’s team, likely lead by Steve Bannon, was somehow being inclusive. The logic behind this idea is impenetrable, unless one assumes that Presidential statements have 140 character limits, making it impossible to affirm the centrality of anti-Semitism to the Nazi worldview while also acknowledging the broad range of people targeted by their hate. Just as bad, however, was Spicer’s pivot. American Jews, he suggested, have no right to be offended by the Holocaust statement for a simple, single, and seemingly unrelated reason: Israel.

Trump, Spicer articulated, is a perfect friend to both Israeli Prime Minister Benjamin Netanyahu and the state he represents. That being the (much debatable) case, how could Jews possibly interpret anti-Semitism in anything Trump does? Aren’t Jews and Israelis always of the same mind? The answer, of course, is that not all Jewish people care singularly, or even primarily, about Israel. Furthermore, there’s plenty of room in contemporary white nationalism, with its fundamental commitment to racial separation, to support a nation way over yonder in which Jews wear their funny hats, eat their funny food, and mind their own business. And if this all comes at the expense of a bunch of Muslims, well, even better. It’s an ugly, unfair view of Israel, but it’s one that the alt-right can easily get behind.

Trump’s team, via Spicer, was offering American Jews a deal: Give up that part of your identity that’s so concerned with the Holocaust and accept one in which Israeli strength, just or unjust, defines what it means to be who you are. Some Jews, of course, tend to agree. Perhaps, they argue, Jewish fascination with victimization is past its expiration date. This would be true, were it not for the obvious fact that many Jews in America and beyond understand the Holocaust not merely as a defining trauma, but also as a call to action. Holocaust remembrance motivates Jews to care about the long-term security of the Jewish people, certainly. It also, however, causes Jews throughout the world to identify Jewishness with the ability to look beyond their own tribe and towards mankind. It convinces millions of Jews to donate to Jewish charities that offer their services to all in need, regardless of religion. It makes Senator Chuck Schumer, a man whose great-grandmother was murdered for being Jewish, cry when he thinks about Iraqi refugees being turned away at JFK. It helps Jews understand that a strong identity need not preclude a commitment to mankind.

The people who prepped Spicer’s response are not terribly interested in mankind or, for that matter, Jews. Sure, they can find a way to make use of them. If the Jewish people can be reduced to an ethnic clan locked in a bitter, eternal struggle with Arabs and Islam, then they fit right in. If their commitment to Israel’s Jewishness makes claims of America’s Christian Soul more plausible, that’s great. If their need to understand and accept Israeli security measures makes building a Mexican border wall appear more morally palatable then, by all means, be as Jewish as you want. But if being Jewish means looking back at events such as the Holocaust and using them as inspiration to protest the wall, fight the ban, and #resist, then they’d just as soon see that line deleted.

In a multicultural democracy, minority groups make compromises. It’s simple math. Politicians, seeking their majorities, never take the time to really understand what makes a subculture tick. Filmmakers and TV producers, aiming for a wider audience, boil their representations down, simplifying the complexity of minority life and, at times, drifting into stereotypes. This reality is unfortunate, but if it comes with a sense of progress towards respect and security, the price may be worth paying.

Bannon, Trump, et al., however, are asking for far too much and giving far too little in return. By deleting Auschwitz and offering Israeli settlements, they are asking Jews to give up the messy history and psychology that is so central to contemporary Jewish identity. Particularly in America, Jews often live in a state of constant contradiction, striving to be both tribal and universal, feeling both empowered and in a state of potential victimhood. In exchange for this difficult but very meaningful struggle, the President is asking Jews to embrace a static, one note, identity-based ethno-religious fervor for Israel. It’s a bad, bad deal. I hope we turn them down.