On hearing that I’m a tour guide, Tzvi, a lawyer acquaintance in Jerusalem, asked me if I take my visitors to the House of Baruch Mizrachi. Sheepishly, I admitted that I’d never even heard of it. “Never heard of it?” He perked up. “Let me tell you a story.”

In the 17th century Baruch Mizrachi arrived in Jerusalem, one of the many Sephardic families who spent generations moving across North Africa and the Middle East in the wake of the expulsion from Spain.  He bought a house in the Old City. When he died, he was buried on the Mount of Olives, that prestigious old hill that will someday according to legend provide the thousands who are buried there with a front-row seat to redemption at the End of Days. In his will, Baruch Mizrachi left his house to his son, on the condition that 1) he never sell it 2) he pass the house on to his son or next of kin and 3) he make the same three stipulations in his will. The result would be that the home of Baruch Mizrachi would, by definition, remain in the Mizrachi family forever, and more importantly, when the Messiah finally did come, Baruch Mizrachi, returned to life as promised by the Creator, would still have a house in Jerusalem.

Believe it or not, it worked: For 300 years, the descendants of Baruch Mizrachi, one after another, lived in his house in the Old City, and knew that by doing so they were leaving the porch light on for their ancestor, so to speak. But in 1948, the Jewish Quarter of the Old City fell to the Arab Legion and for 19 years no Jews — Mizrachis or otherwise — set foot in the Old City. After the Old City’s recapture in the Six-Day War in 1967, the Mizrachi family asked for their house back. But the government had embarked on a massive rebuilding project and the previous owners of homes in the Old City had to settle for financial compensation.

Tzvi, my lawyer friend, is the grandson of the last Mizrachi who had lived in the house up to June of 1948. Tzvi’s grandfather refused to accept any compensation money, since doing so would have, in his view, been a betrayal of centuries of family commitment. Instead, Tzvi’s grandfather and father went to Teddy Kollek, mayor of Jerusalem at the time, and had him sign a legal document asserting that when the Messiah comes, this house would revert to the ownership of one Baruch Mizrachi. Tzvi has carried on the family tradition. Though not at all religious, he is a fastidious and conscientious attorney, and so continues to have each successive mayor of Jerusalem sign the document. If you go to the house at #10 HaNevel Street in the Old City you’ll see a plaque attesting to this commitment. And now I’m pleased to report (particularly to Tzvi) that I make sure to stop there when I’m in the Old City and show this spot to my visitors as often as I can.

There’s something in this story that encapsulates the wonder of Jerusalem: Jerusalem is unlike any other city. It breathes history; it exudes legend. Even a slick downtown lawyer like Tzvi feels an obligation to centuries of yearning for redemption, and even Uri Lupolianski, the ultra-Orthodox former mayor of Jerusalem, laughed indulgently at the ridiculousness of the request as he signed the document committing the city to this messianic real estate deal.   Shulamìt Aloni , the fiercely secular feminist parliamentarian snapped at Haredi MKs who were heckling her in the Knesset: “Why are you always so rude to me?! After all, we were all together at Mount Sinai — even if it never happened!”

Even if it never happened.  That is the double vision of Jerusalem, a city where legend and history, fact and fable, poetry and construction cranes bump into each other on a daily basis.

Like Shulamit Aloni, Tzvi is not a man of faith. Yet when I asked him, “Why do you do bother with this?” He smiled and said, “Well…just in case the Messiah does come after all, I’d feel awful if Baruch Mizrachi didn’t have any place to live.” 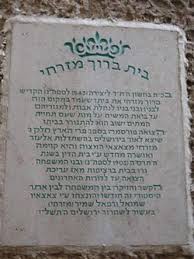