The Blogs
Ticia Verveer
Archaeologist, writer טיציה וארואר
Apply for a Blog
Advertisement
Please note that the posts on The Blogs are contributed by third parties. The opinions, facts and any media content in them are presented solely by the authors, and neither The Times of Israel nor its partners assume any responsibility for them. Please contact us in case of abuse. In case of abuse,
Report this post.

I was always told by my grandfather that everybody was gone, deported, murdered, exterminated, burned, it was ‘the unspoken’, an unspeakable pain. There were no graves and therefore we never spoke of Jewish graves, cemeteries, or burial in general in his presence.

The deep pain my grandfather felt was caused by the knowledge that his loved ones were cremated, their bodies destroyed, making burial impossible. The essential aspect of our belief, the eternity of a soul, had been assaulted. The soul suffers when a grave is disturbed, and the soul and spirit can only be at rest if the physical body in which they were located is at rest in the grave.

The guarantee of total peace for our family was taken away. In his eyes a memorial could not replace a grave, let alone a Jewish cemetery. The destruction of the Jewish communities during the Shoah had resulted in hundreds of thousands of Jewish graves in cemeteries across Europe being destroyed or abandoned. For my grandparents from my mother’s side there was not even the slightest attempt to search for graves. Being of French-Greek Jewish descendance, it was clear to them that nothing had survived.

In the summer of 2017 the news reached me that there were graves of family members to be found on a Jewish cemetery in The Hague, in the Netherlands. A bit skeptical I called a telephone number I found on the website and when Ir. R.J. (Rob) Gmelig Meijling took my phone call, he enriched my life with the most wonderful information concerning my family.

I learned that a foundation took over the care of the 17th century Jewish cemetery when in the aftermath of World War Two, the few Jews that survived, did not have the means to ensure the protection of the ancestral graves. For years the cemetery was so neglected, overgrown with weeds, plagued by deterioration of the grounds and gravestones, and littered with fallen branches, that the nonprofit ‘Foundation for the Preservation of the Jewish Cemetery in the Hague’ (Dutch ‘Stichting tot instandhouding van de Joodse begraafplaats te ‘s- Gravenhage’) was founded by drs. P.H. Enthoven to raise funds. Even now, after a proper cleanup and improved maintenance procedures, the around 10,000-grave cemetery must rely on the generosity of donations. 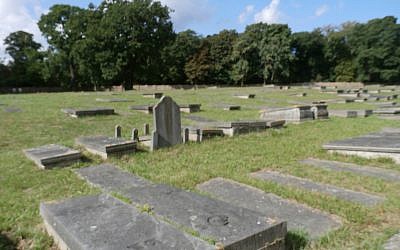 The board of the foundation ensures that the graves are cared for in perpetuity. From 1986 to 1988 the around 2800 gravestones were cleaned, recorded, and photographed. The epitaphs written in Hebrew, Yiddish, Portuguese and Spanish were translated into Dutch. The city archives of the city of The Hague keeps the documentation safe for future generations. Approximately 80% of the 10,000 Jews of The Hague were deported, and almost all the synagogues were plundered, heavily damaged, or destroyed. The cemetery had been a victim of the construction of German trenches and suffered damage from an allied bomb, but the gravestone fragments haved been collected and assembled into a monument on the cemetery. In 2009, pupils of the Wateringse Veld College in The Hague designed the memorial and pupils of the Escamp VMBO (also in The Hague) constructed it. 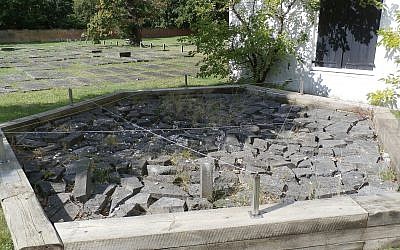 In 1694, Ashkenazic Jews purchased land for a cemetery on the present-day Scheveningseweg in The Hague, seat of the government of the Netherlands and capital of South Holland province, where Portuguese Jews also could bury their dead. By 1710 the cemetery was divided into two separate burial grounds for the Ashkenazic and Sephardic communities. The Jewish settlement in The Hague dates to the last decades of the 17th century. The Emancipation Decree of 1796 transformed the legal and social status of Jews and the structure of their communities. Many Dutch Jews from the provinces migrated to The Hague, attracted by the importance of The Hague as the country’s center of government. 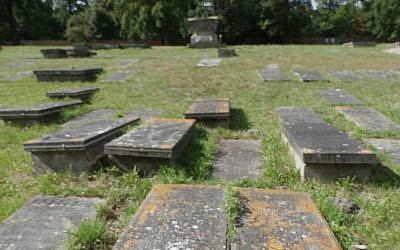 On 18 August 1811 when Napoleon Bonaparte, whose French army were occupying the Netherlands, signed a decree establishing a registry of births, deaths and marriages, he also changed the course of my family. Families, who until that time had got on without a surname, were obliged to pick a surname. In our case the strangest thing happened, Abraham Salomon wasn’t allowed to register his family name Cohen, as it was too common. He was forced to choose a different name, Verveer, which at first was only used for official purposes, but over time, the family accepted the new Dutch name. The family had to face the political circumstances and adapted. The symbol of the Kohanim, two hands arranged for the Priestly Blessing, is still depicted in relief on the Verveer grave stones. 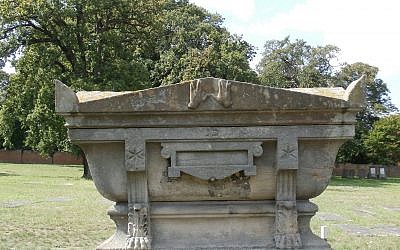 Perhaps simplistic, but I never thought of my Jewish identity beyond that of my mother. Sure, my father was Jewish, but traditional law defines the child of a Jewish mother as a Jew. Now that I know we are kohanim, I am struggling with the realization that part of my Hebrew heritage, my identity’s uniqueness was held from me. 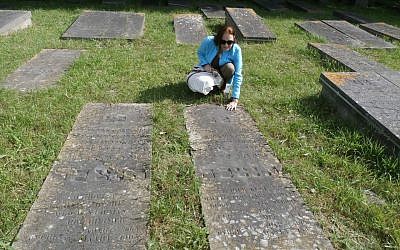 Ticia Verveer at the grave of a family member, Jewish cemetery, The Hague. Photo Ticia Verveer

But wasn’t it for the dedication of the foundation to protect and preserve the cemetery I wouldn’t have known about the history of our family name. Therefore, being grateful and feeling blessed, are words that cannot grasp the intense feelings I have for this wonderful group of people. As Ir. R.J. (Rob) Gmelig Meijling put it, this cemetery is also part of our history, and with this remark he has opened my eyes that my Jewish identity encompasses both names, the Hebrew Cohen and the Dutch Verveer, a Dutch Jewish ancestry to be proud of. 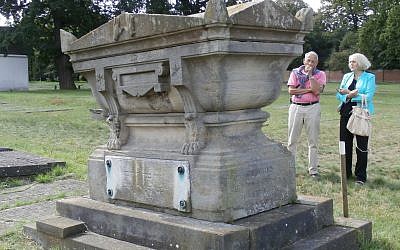 One of the most remarkable ornamental grave markers on the cemetery belongs to my relative Salomon Verveer, the 19th century painter. The presence of his grave stone offers a vivid contrast to the rest of the cemetery where traditional Jewish grave markers fill the field. Last week I received the most wonderful news from Ir. R.J. (Rob) Gmelig Meijling that the foundation will receive a grant from The Hague city council to consolidate the grave stone. 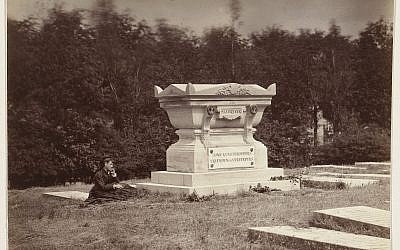 The website of ‘The Foundation for the Preservation of the Jewish Cemetery’ includes a PDF of people buried in the cemetery.  In 2003 the remains of the archive of The Hague’s Jewish community was returned to The Hague from Russia. The documents are now kept at The Hague’s Municipal Archive.