This week’s portion of Naso contains that famous threefold blessing of the ancient priests. You’ll note that these blessings – and all blessings – are dependent on the human element as indicated by the repeated word “face.” God’s loving face is seen through our own glowing countenance. The key to blessing, and the key to all religion, one might add, is that light of love. Pope Francis demonstrated once again last weekend in Jerusalem just how much his rock-star ministry is based on the notion that love trumps doctrine. Not just doctrine, but as a columnist wrote recently,

Rules are rules, but the Pope seems to place everything in its human context. Love trumps everything.
Cristina Odone – the Telegraph

Everything he did was so human – even when nodding off ay one point because of jetlag. Or when his vestments kept flying in the wind – anyone who has ever worn a tallis or yarmulke could totally relate. And to the Pope’s kippa keeper I have three suggestions: bobby pins, clips or Velcro. They all work. 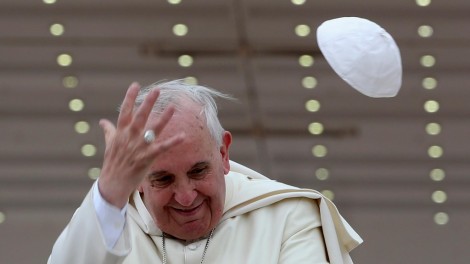 For Jews, love trumping doctrine is no huge thing, because we don’t have a lot of the latter. For us it’s about love trumping law – or justice (din) being trumped by kindness (hesed), which stems from kabbalistic lore as well as biblical sources like the book of Ruth, read next week on Shavuot.

Francis was able to navigate cleanly between walls — the security fence, the terrorism memorial, the Kotel – because he was so busy building bridges (and as is often pointed out, the word “pontiff” means bridge builder). And those bridges were built most often from simple smiles and occasionally hugs or the laying of hands on ill children (a group from “Make a Wish” met him at the president’s home) as well as in the musical selections recited in his honor. I was brought to tears by the multicultural medley of “Halleluyah” songs chanted by Jewish, Muslim and Christian choir of children.

This pope is first and foremost a human being. That’s exactly what I’ve felt rabbis should be as well, from the very beginning of my career. So the love that he conveys in each blessing, the face of God that shines in his face, enables him to get beyond any doctrinal difficulties – including ones he clearly wishes would go away.

If only Love could trump doctrine for everyone, this would be a much better world. We can take comfort that Pope Francis has gone a long way toward helping that to happen. His highly touted prayers for peace in the Middle East next week, joined by Peres and Abbas, may not bring about any immediate change of policy, but what we need most of all now is a change of tone.

Pope Francis already provided that, last week in Jerusalem, as his “tallis” flew wildly in the wind.