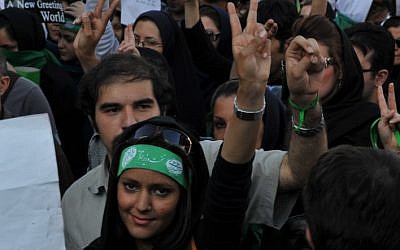 The growing support for the BDS movement that promotes the boycott, divestment, and sanctioning of companies doing business with Israel is deeply troubling.The fact that proponents of the movement have been silent on the human rights abuses, terrorism, and regional mayhem unleashed by the Islamic Republic of Iran raises a fundamental question: Is there no limit to the hypocrisy of supporters of BDS?

Iran’s horrific human rights record
The recent comments from U.S. Congresswoman Ilhan Omar, a supporter of the BDS, who equated Israel with Iran, were especially disturbing. The best response to her ridiculous claim came from Pete Buttigieg, the openly gay Mayor of South Bend, Indiana and a rising star in the Democratic Party. When asked about the Congresswoman’s statement, he said, “I disagree with the comment comparing Israel to Iran. People like me get strung up in Iran. So the idea that’s what going on is equivalent is just wrong…”

The Mayor is correct and the facts speak for themselves. Iran is one of the most dangerous places in the world to be openly gay. The horrific images of public hangings of young Iranians accused of homosexuality have been all too common.

According to The Guardian, “Iran’s leaders describe homosexuality as “moral bankruptcy” or “modern western barbarism.” Amnesty International estimates that 5,000 gays and lesbians have been executed there since the 1979 Iranian revolution.”

The Iranian regime is also notorious for its brutal treatment of women. Iranian women are routinely arrested and sentenced to prison for refusing to wear the traditional headscarf, the hijab.

According to a report from United Against Nuclear Iran (UANI), “Tehran enables violence against women and sexual exploitation of girls; harasses, jails, fines, and flogs women for crimes like appearing in public without covering their hair and bodies; forcibly segregates women from men; disproportionately punishes women in the judicial system…”

Iran’s malignant foreign policy
Then there is the tragedy of Syria. Since the outbreak of the Syrian civil war, the Iranian regime provided massive support to prop up the brutal dictator, Bashar al-Assad. The human cost of Iran’s support for the Syrian regime: over 500,000 dead and more than five million refugees.

Since 2011, Iran supplied the Syrian regime with an endless supply of ammunition, weapons, billions of dollars in economic support and deployed tens of thousands of fighters from Hezbollah and Shia militias from across the Middle East. All this was coordinated by Iran’s Islamic Revolutionary Guard Corps (IRGC).

The evidence for war crimes committed by the Syrian regime- with the direct support of Iran- has been known for years but ignored by BDS supporters.

In her 2014 speech at the U.S. Holocaust Memorial, America’s UN Ambassador Samantha Power said, “President Assad is deliberately targeting his own people – using indiscriminate air attacks, introducing the world to barrel bombs, denying civilians food in starvation campaigns and practicing systematic, industrial torture – all of this to force the Syrian people to submit to his will.”

And why did Iran go to all this trouble in Syria?

Iran’s strategic goal is to create a platform in Syria for a future war against Israel where- together with its loyal proxy Hezbollah in Lebanon- Iranian leaders can fulfill their threats to the destruction of Israel. That explains why Iran continues to work to build precision missile factories in Syria and upgrade the accuracy of the vast arsenal of more than 100,000 rockets it has supplied to Hezbollah.

As Middle East expert Karim Sadjadpour wrote, “Distilled to its essence, Tehran’s steadfast support for Assad is not driven by the geopolitical or financial interests of the Iranian nation, nor the religious convictions of the Islamic Republic, but by a visceral and seemingly inextinguishable hatred for the state of Israel.”

Beyond the Middle East, Iranian agents have been repeatedly accused by the European Union of assassinating political dissidents in Europe and organizing plots to target gatherings of regime opponents in European cities.

The double standard
Over the past several years we have seen countless protests against Israel organized by BDS supporters on American college campuses and in European capitals. Yet, can anyone remember similar protests against Iran for its continued threats to peace and human rights?

When BDS supporters ignore Iran’s support for war crimes in Syria and threats to the destruction of Israel, ignore the execution of gays and lesbians in Iran, ignore the assassination of political dissidents in Europe and turn a blind eye to the brutal treatment of Iranian women, it should be obvious that something is wrong. The only explanation is that the moral foundation of the BDS movement is based on pure hypocrisy.