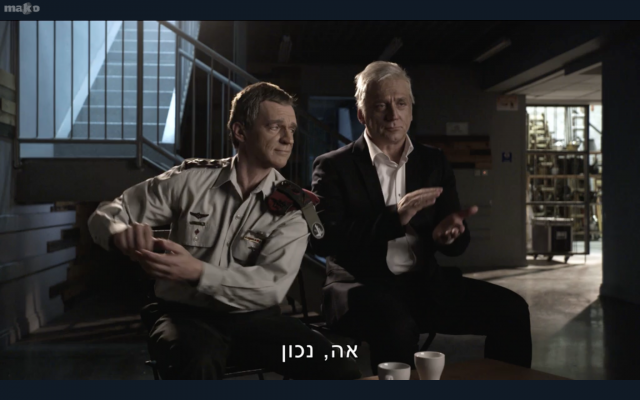 Screenshot from the Eretz Nehederet sketch ''Operation Guardian of the Pensions'

The season opener of Eretz Nehederet (Wonderful Country), Israel’s popular weekly satirical television show, featured “Operation Guardian of the Pensions,” in a send-up of Ilana Dayan’s (played here by Liat Har Lev) investigative journalism show. The generals in the Kirya should have been paying attention. The issue of pensions for IDF retirees, of which only readers of the economic press are usually aware, was derisively lampooned on the screen. More than half a million people watched it in real time, while many others saw it on the social media networks.

The IDF may do well by those who serve it, but along the way, it is losing public trust, and this is a very disturbing trend. Public trust in the army is very much influenced by the actions and norms of the IDF, and it is an asset of existential importance to Israeli society. The leaders of the state and military commanders should work together to strengthen it, even at the cost of waiving personal benefits.

Six years ago, the conclusions of the Locker Defense Budget Review Committee were published, with dozens of recommendations, including one to change the pension structure in the IDF and to cancel the “Chief of Staff bonuses.” The army’s response “took no prisoners.” The IDF spokesperson at that time, Major General Moti Almoz, said that “the Locker Committee is like a bullet between the eyes, and this is not a populist statement.” This is what will be done to those who dare.

It was not for nothing that Eretz Nehederet turned the spotlight on the issue of pensions for IDF retirees. The early retirement age and the size of the pensions paid to army retirees are eye-popping. For an Israeli with an average income of NIS 12,700 a month, a retiree receiving a pension (on average) of NIS 19,500 a month and a retirement package of NIS 8 million sounds like fantasy. Pensions of this size naturally also have dramatic macro-economic consequences. Out of Israel’s actuarial debt, 40% or NIS 366 billion is the debt of the defense establishment. Pension payments, which are constantly growing due to highly beneficial updating mechanisms, are also a permanent weight on the defense budget. In 2021, for example, out of a budget (excluding American assistance) of NIS 57.8 billion, the state pays pensions to military retirees in the amount of NIS 8.6 billion, some 15% of the total budget.

One of the more annoying elements – public and ethical – in military pensions is known as  “Chief of Staff bonuses.” This refers to the Chief of Staff’s authority to grant anyone retiring from the army additional percentages beyond what they are entitled to by law. This increase can be up to 19%. The bonus is fundamentally intended to assist military retirees in exceptional cases, but in practice 98% of pensioners receive it. These bonuses alone cost the state NIS 1.4 billion a year. This situation has led the Ministry of Finance and Ministry of Justice to notify the High Court of Justice, in a pending appeal on this matter, that even in the view of the state the Chief of Staff bonus is not legal.

The last time the defense budget was independently examined was in the framework of the Locker Committee. The Committee, which published its conclusions in June 2015, made proposals to streamline and introduce improvements to the army and the security establishment, including with regard to the issue of pensions. In this context, the Committee recommended, among other things, to completely cancel the Chief of Staff bonuses and replace the budgetary pension or bridging pension by a significant grant to be given to retirees upon discharge from the army. Understanding the difficulty of retaining the best people in the combat tracks and other elite tracks, who are a minority of the retirees, the committee recommended allowing them to continue receiving a bridging pension. Adoption of these measures would have saved the state coffers billions of shekels.

But the army stuck to its guns. Mainly because of these recommendations, the Locker Committee’s report was met by the “heavy artillery” of the defense establishment. As usual, the army closed ranks, and the Minister of Defense and senior officers excoriated the Committee and its recommendations. Instead of listening to a group of senior and experienced people who, without exception, love the army and the state and were acting in the complete belief that it is necessary to find a different balance from what currently existed, the army preferred to continue to go its own way and, like an all-powerful labor union, take care of its own.

The army’s victory in the budget battles, its victory in increasing its pensions, whitewashing the Chief of Staff bonuses (which are expected to be approved shortly), and continuation of conditions for its retirees that are exceptional by any standard – is a Pyrrhic victory. The Minister of Defense and the Chief of Staff may have emerged triumphant from “Operation Guardian of the Pensions,” but outside the Finance Ministry, they face a more significant challenge: public trust in the military and its commanders is eroding. The army’s conduct in these matters should have been more statesmanlike. If the army does not adopt the solutions proposed in the past and start reducing the size of the pension itself, sooner or later it will be forced to do so. And on the way, it, and all of us, will lose an important existential asset.

About the Author
Dr. Shuki Friedman is the vice president of the Jewish People Policy Institute and a lecturer of law at the Peres Academic Center.
Comments