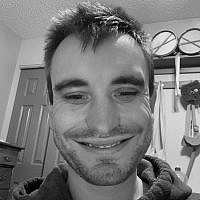 The Blogs
Sam Duncan
Apply for a Blog
Advertisement
Please note that the posts on The Blogs are contributed by third parties. The opinions, facts and any media content in them are presented solely by the authors, and neither The Times of Israel nor its partners assume any responsibility for them. Please contact us in case of abuse. In case of abuse,
Report this post.

I know that is a weird way of introducing myself on my first blog post, but I want to be upfront about who I am. It’s also central to the theme of this article.

I am an online activist — hoping to do this offline soon — supporting the Jewish community. I’ve been involved with JTwitter, the affectionate nickname for the Jewish side of Twitter since 2016, thanks to a Jewish friend who no longer uses the infamous bird app.

Allyship plays a dominant role in my activism as it should for all who support marginalized people or communities.

I’m going to get right to the heart of the matter. We are at a critical juncture where non-Jewish allyship is more crucial than it’s ever been. With Kanye West’s recent spate of antisemitism on social media and the Goyim Defense League hanging banners with hateful messages from interstate overpasses, antisemites feel emboldened to wear their hatred out in the open. The scary truth is that this is only right-wing antisemitism.

Left-wing antisemitism is also on the rise. The trouble with left-wing antisemites is they dress up their hatred of Jews with buzzwords or phrases like “free Palestine” and “Anti-Zionism isn’t antisemitism.” They point the finger at the other side in a desperate attempt at deflection. They are the proverbial wolves in sheep’s clothing. But most left-leaning Jews I know see right through their dirty tricks.

Since I brought up anti-Zionism, I want to make a point about Zionism. From my gentile POV, I think it is vital for other non-Jewish allies to support Israel and the Jewish right to self-determination, and I don’t mean in the creepy evangelical “end of times” way.  I mean that if we’re going to offer our hand in friendship with Jews, we need to make a full commitment to defending the Jewish right to live freely in the land that you all are indigenous to.

Now at this point I’m sure you’re wondering why I, a non-Jew, chose The Times of Israel as the outlet to write these words. It’s because of this. Many Jews feel as if the gentile world has completely abandoned them. I want to say it straight from the horse’s mouth. You guys are not alone in this seemingly endless uphill battle against antisemitism. Many non-Jews are fighting the good fight with you, and we have your backs no matter what. It might not bring you much comfort, but I do hope you feel less alone in this war.

Nobody, I included, will ever be a perfect ally. Far from it. But I hope that by learning and listening, we can grow and become better allies.

I will end on this. I have felt more love, compassion and friendship from Jews than I have from other people. I’m thankful for the many wonderful Jewish friends I have, and I hope to form stronger bonds with the Jewish community. I hope others will join me on this journey.

About the Author
Sam Duncan is an activist for Jews and Israel. He currently lives in Colorado and is student at Pikes Peak State College, working towards his associate's degree in applied sciences. After college, he hopes to work in radio and continue advocating for Jews around the world.
Related Topics
Related Posts