It is no secret that intermarriage and assimilation pose a serious challenge to the continuation of our Jewish heritage. It is known that Jews who have a strong Jewish education are much more likely to marry someone Jewish and raise a Jewish family.

When American Jews think of assimilation, they usually think of it happening in the United States. However, it happens in Jewish communities around the globe. Therefore, it is extremely important that Jewish organizations who have had success with Jewish education in the United States and Israel spread their message and give support to other Jewish communities around the world.

There is an organization that is doing just that. It is called Dirshu and is doing a fantastic job of educating Jews from Lakewood to Hong Kong! In fact, the founder and president of the organization, Rabbi Dovid Hofstedter just visited Hong Kong to show his support to the Jewish community there.

Dirshu is an international Jewish educational organization that educates Jews across the world on all tractates of the Talmud and on the teachings of the Chofetz Chaim. Dismayed that the high levels of Jewish learning dropped after the Holocaust, Rabbi Hofstedter launched the Dirshu network.

He developed a program of study that Jews can do in yeshivot or in study groups. All Dirshu students follow the same program and are given the same tests on the material. Students who score highly are given cash stipends so there is a great monetary incentive to do well on the tests.

This is important because as we all know, what has held the Jewish people together for thousands of years was their study of Torah. The way all Jews think and debate an issue goes back generations. I have an example to give. A friend who is a lawyer told me a funny story. He was working on a real estate deal and his client who had a non-Jewish sounding last name kept reminding him of every possible thing that could go wrong with this deal. There was such attention to detail about every issue. So when discussing the deal with his client, he said to her, “I don’t know if you have ever heard of the Talmud, but you look at things through the eyes of a Talmudic scholar.” She responded to the lawyer, “Well, that might be because my grandfather is a rabbi and he taught me to look at things a certain way!

Rabbi Dovid Hofstedter travels far and wide so Jews for generations will still think in that scholarly way and have a love of Torah. As I mentioned earlier, Rabbi Hofstedter traveled to Hong Kong and while there, met with leaders in the Jewish community there. He gave a lecture to Dirshu students and spoke at a synagogue on Shabbat about how you have to have persistence when studying.

As if that wasn’t a far enough of a trip for a rabbi from Canada, which is where he is from, he then ventured to Melbourne, Australia.

I just recently learned that Melbourne has an extremely large observant community. About 450 men and 50 women attended a siyum there to mark the end of learning a tractate of the Talmud that discusses damages/torts. Rabbi Hofstedter told a friend of mine that he enjoyed visiting with people in the Melbourne Jewish community and talking with local rabbis and visiting schools. He wants people all over the world to know that Dirshu is there to support them.

From there Rabbi Hofstedter went on to Sydney, Australia. While their Jewish community is very diverse in terms of levels of observance, Rabbi Hofstedter said his heart was warmed because of all the different denominations of Jews who came out to hear him speak about the centrality of Torah study in Jewish life.

Just as when a doctor enables a Jewish childless couple to bring a child into the world, every time a Jewish organization like Dirshu touches a Jewish soul, the Jewish people are saved for generations to come. 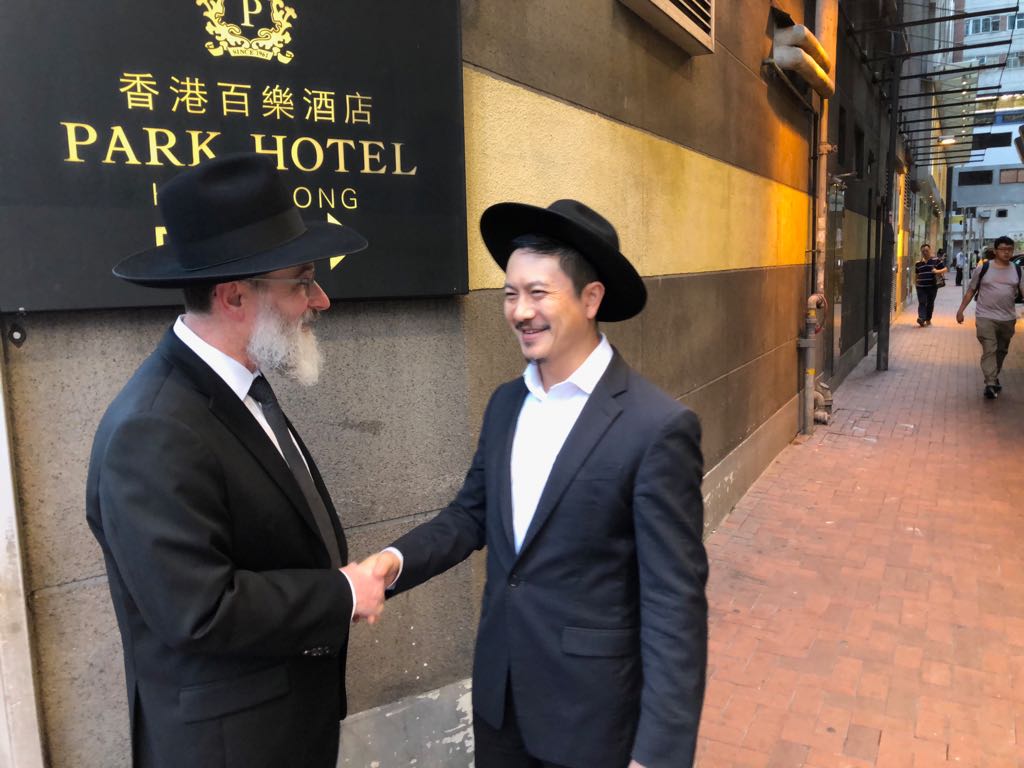 Rabbi Dovid Hofstedter with a member of the Jewish Community in Hong Kong.
About the Author
Zachary Silver is a committed pro-Israel activist from West Hartford, Connecticut. A graduate of Brandeis University, Silver is the founder of Brandeis' Tamid Israel Investment club chapter. He is involved in various communal engagements seeking to promote the State of Israel.
Comments