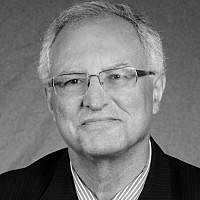 The Blogs
Mohammed S. Dajani
Apply for a Blog
Advertisement
Please note that the posts on The Blogs are contributed by third parties. The opinions, facts and any media content in them are presented solely by the authors, and neither The Times of Israel nor its partners assume any responsibility for them. Please contact us in case of abuse. In case of abuse,
Report this post.

I do not want to argue that the Palestinian Authority should release the Palestinian journalist and moderate Wasatia activist Salim Sweidan because he is innocent and did not break any laws. This is what his lawyer is doing. Ma’an news agency had already stated that Sweidan was not the source of the information reported that Palestinian security services assisted Israel in apprehending the five people alleged to be part of a Hamas cell suspected of killing Eitam and Na’ama Henkin on a West Bank roadway last October.

I do not want to argue that Sweidan should be released on humanitarian grounds because his health requires constant medical attention which he will not receive in his jail. This is what his family is doing.

I do not want to argue that Sweidan should be released on the grounds that a journalist in a democratic country should enjoy the right of press freedom. This is what the International Press Institute and Sweidan’s journalist colleagues are doing. IPI Director of Advocacy and Communications Steven M. Ellis said “Imprisoning journalists who report on sensitive matters of public interest is antithetical to democracy.” Ellis added that “the Palestinian Authority should have exercised its right to deny the report if it was untrue, rather than arrest the journalist reporting it. Sweidan should not face an arbitrary and ongoing imprisonment, and we urge the Palestinian Authority to release him immediately.”

IPI Executive Board Member Daoud Kuttab, an award-winning Palestinian journalist, similarly called for Sweidan’s immediate release. “The fundamental component of the freedom of expression requires that security officials refrain from interfering or pressuring or intimidating journalists and media outlets,” he said. “The case of the detention of Salim Sweidan and the ensuing pressure on various media outlets is a clear violation of the Palestinian basic law, and the commitments of the state of Palestine.”

I do not want to argue that Sweidan should be released for being a Wasatia moderate activist working for reconciliation, conflict resolution and peace through dialogue and non-violent means. Others are doing this.

I do not want to argue that Sweidan should be released because the accusations of the PA prosecutor in Nablus listed trumped up charges of “slandering public authorities, making up and publishing false news, violating Palestinian press laws, publishing items which contravene nationalistic responsibilities, breaching journalistic ethics, publishing material inciting hatred and violence, and publishing material that can harm national unity” none of which has any evidence to support it in a court of law of any democratic country.

I do not want to argue that Sweidan should be released because he is such a nice person who would not have done what he is accused of doing with evil intention. His friends can testify to that.

What I would like to argue is that the PA, in denying that it cooperated with the Israeli authorities in combatting terrorism encourages the terrorists to believe that they are in control and the Palestinian people see them as heroes. The PA should have the courage to tell the public that its security services did assist Israel in apprehending terrorists suspected of killing a father and a mother in front of their children for no other reason than being Jews and that it will do so again on the religious ground that the Quran forbids the killing of innocent souls.

The PA should not shy from declaring that its policy is to fight terrorism in Palestine, whether committed by Muslims, Christians or Jews. This message, that terrorism is not jihadism and violence is the wrong path to take, would echo much better with the Palestinian and the Israeli peoples as well as the international community.

About the Author
Mohammed S. Dajani, Weston Fellow at The Washington Institute for Near East Policy, founded the Wasatia movement of moderate Islam and previously worked as a professor of political science at al-Quds University in Jerusalem.
Comments