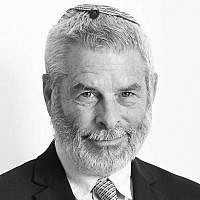 The Blogs
Hillel Frisch
Apply for a Blog
Please note that the posts on The Blogs are contributed by third parties. The opinions, facts and any media content in them are presented solely by the authors, and neither The Times of Israel nor its partners assume any responsibility for them. Please contact us in case of abuse. In case of abuse,
Report this post. 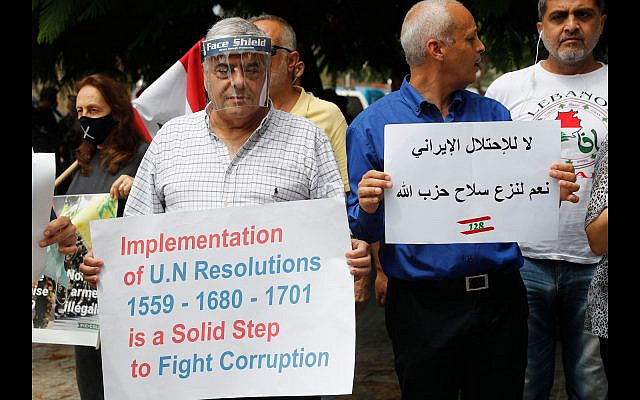 Anti-Hezbollah protesters hold placards during a sit-in against Hezbollah and Iran in front of the French ambassador's house, in Beirut, Lebanon, Tuesday, July 14, 2020. The Arabic placard reads:"No to the Iranian occupation, yes to disarmed Hezbollah weapons." (AP Photo/Hussein Malla)

Lively analysis has taken place over the possible ramifications of the Israel-UAE peace agreement. Some have rightly noted that while this is the third peace treaty Israel has signed with an Arab state, it is the first to contain the promise of a warm peace. This is in sharp contrast to Israel’s relations with prior accord partners Egypt and Jordan, which are limited to very narrow personal, diplomatic, and security relations. With Egypt, the peace treaty has rarely reached even that threshold.

Hosni Mubarak, throughout his 30 years of ruling Egypt, never made an official visit to Israel, which is less than an hour’s flight away. Nor has King Abdullah of Jordan. In over a decade of rule, Abdullah has abstained from visiting Israel despite meeting several times with PA head Mahmoud Abbas in nearby Ramallah.

Israel has been at peace with Egypt for nearly a half a century, but not one Egyptian soccer team has ever played against an Israeli team either in Israel or anywhere else. Not one delegation from an Egyptian university has ever visited an Israeli counterpart, let alone engaged in a joint program. Not one Egyptian cultural ensemble or group has ever visited Israel. On the rare occasions when individual Egyptian artists have come to Israel, they did so primarily to appear before Israel’s Arab citizens. For that gesture they were met with opprobrium and threats. Such was the power of the Arab world’s boycott against “normalization.”

Many have noted that the UAE peace treaty, unlike the treaties with Egypt and Jordan, was signed under quite different conditions. There is a wide expectation that it will be followed by one or more similar pacts with other states, especially other Gulf States and Saudi Arabia. No such expectations accompanied Israel’s peace agreements with Egypt and Jordan.

One major accomplishment has already been achieved by the UAE-Israel agreement. It has been largely overlooked, perhaps because it is a case of what did not happen rather than what did. Even as an El Al plane flew over Saudi Arabian territory carrying a bevy of Israeli officials, businessmen, and investors to the Emirates with the aim of promoting a warm piece, there were no demonstrations of consequence in the Arab world. Amman, Beirut, Tunis, Algiers, and Rabat, where demonstrations against the Israeli “occupation,” the “desecration” of al-Aqsa, and other charges against Israel are generally well-attended, were silent, at least on the street level.

There was, of course, a din of voices castigating the UAE for normalizing ties with Israel, but they emanated mostly from dinosaur institutions that dominate the landscape of the Arab world and against which there are frequent popular demonstrations. These include organizations linked with the Arab League, official professional unions, and various political movements whose common characteristic is a fossilized leadership that has been in place for 25 years or more.

Even among ordinary Palestinians, protests were miniscule. In photos taken in both the PA and Hamas-dominated Gaza, only a dozen or so demonstrators are shown burning effigies of Netanyahu, Trump, and UAE head Sheikh bin Zayed. The demonstrators were not only paltry in number but mostly members of the older generation.

Rest assured that if the lack of demonstrations went largely unnoticed by the general public, it was most assuredly noticed by state leaders in the Middle East and their violent proxy organizations. For those leaders who wisely seek to establish relations with Israel, the lack of demonstrations was reassuring, as it lowered the sense of danger emanating from the Arab street regarding the Israeli-Palestinian conflict.

For Iran and the violent proxy organizations it supports, the lesson was vivid and painful. Not only was the Palestinian card they have played for decades visibly diminished in importance, but the lack of protest over the Palestinian issue contrasted sharply with the growing level of protest in Lebanon and Iraq regarding Iranian meddling in their internal affairs to the detriment of the native populations.

Though the lack of significant protest against the unfolding relationship between Israel and the UAE might have come as a surprise, it is one more sign of long-term processes of political maturation in the Arabic-speaking public. The late senator and former Harvard professor Patrick Moynihan famously said that all politics are local. Indeed, mature democracies are usually characterized by populations that privilege local interests and welfare over universal concerns.

The Arabic-speaking populations of the Middle East have been gradually heading in that direction since the heyday of pan-Arabism in the 1950s and 1960s. During the massive protests at the beginning of the present decade, observers expressed surprise at how little attention was focused on Palestinian and other regional issues and how great the public preoccupation was with solving domestic problems.

In today’s Middle East, populations are no longer clamoring for pan-Arab unity, pan-Islamic unity, the caliphate, or, in the case of Iran and Turkey, imperialist aggrandizement. They want better social welfare, greater economic opportunity, good education, innovation, the rule of law, and equality before the law at home.

The unfolding relationship between Israel and the UAE fits into this frame of mind. The Arabs taking to the streets today do not believe the Palestinian nationalist vision is more deserving of their efforts and attention than their own struggle for a better future at home. In Iran, the people are less and less willing to be subservient to the regime’s policy of endless conflict and dissipation of national resources at their expense.

This post was originally published at the Begin-Sadat Center for Strategic Studies and is published here by permission of BESA.

About the Author
Prof. Hillel Frisch is a professor of political studies and Middle East studies at Bar-Ilan University and a senior research associate at the Begin-Sadat Center for Strategic Studies.
Comments