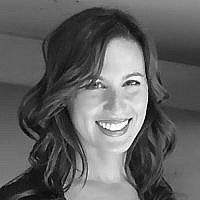 The Blogs
Masada Siegel
Apply for a Blog
Advertisement
Please note that the posts on The Blogs are contributed by third parties. The opinions, facts and any media content in them are presented solely by the authors, and neither The Times of Israel nor its partners assume any responsibility for them. Please contact us in case of abuse. In case of abuse,
Report this post.

This handsome smiling face reached out to me from Facebook grabbing my attention, and then I read the post.

IDF Staff Sgt. Shachar Dauber, a 20-year-old paratrooper, was killed by Hamas terrorists in Gaza. In a last letter to loved ones he asked the following.

“I have one thing to ask and that is for you to remember me.
Love,
Shachar Dauber”

While I sit thousands of miles away, I choked back tears for a life lost protecting Israel, his family, and also because he was protecting mine.

Israel is the only democracy in the Middle East with women’s rights, gay rights and voting rights for all her citizens; it’s also a safe haven for Jewish people around the world.

Israel’s soldiers are on the frontline of terror. These young fresh faced eighteen-year-old’s protect all of Israel’s residents, which include Jews, Christians, Muslims, Blacks, Whites, Asians and Indian people. This is just a short list of the religions and ethnicities of Israel’s citizens.

Since the day of its creation, Israel has dedicated itself to saving Jewish lives as well as helping countries globally in their time of crisis.

When Israel was created as a state in 1948, hundreds of thousands of Jewish people had to flee Egypt, Lebanon, Syria, Iraq, Algeria, Tunisia, Yemen and Morocco without anything, leaving behind all their belongings and properties. Upon arrival to one of the only places in the world that would accept them, they were not put in refugee camps, but were absorbed into Israeli society. Their descendants are now doctors, lawyers, teachers, artists and musicians in Israel. There isn’t a “Jewish refugee” problem, because Israel welcomed these people with open arms.

In the early 1980’s, thousands of Ethiopian Jews fled the Eritrean conflict to neighboring Sudan, but were stranded in refuge camps. Israel didn’t leave them to their own devices. In November 1984, “Operation Moses” started. For about two months, buses would pick up groups of Ethiopian Jews from the refugee camps and take them to Khartoum where they would board flights to freedom. A total of 7,800 Ethiopian Jews were brought to Israel.

When news of this daring rescue broke, New York Times columnist William Safire is quoted as saying: “For the first time in history, thousands of black people are being brought into a country not in chains but as citizens.”

The mission was not over, as more Ethiopian Jews needed rescuing. So while it took a few years, in 1991 “Operation Solomon”, a covert Israeli military operation was conceived. Over 14,000 Ethiopian Jews were rescued and quickly brought to Israel at the cost of tens of millions of dollars.

Whenever there is a Jewish person in need, from rescuing the Ethiopians to opening the doors to the Russians Jewry who were invited to emigrate after years of oppression, Israel welcomed in tens of thousands of people.

However, Israel also stands ready to assist countries in times of trouble worldwide. The Israeli Defense Forces today can be found saving lives around the world from places like Turkey, Mexico, Rwanda, Argentina, Kenya, the Philippines, even in the United States in times of crisis.

When the world turned it’s back on Rwanda during the bloody civil war in 1994 between the Hutu and the Tutsi tribes where one million people lost their lives and millions of people flooded refuge camps in neighboring countries, Israel was there to help.

The IDF flew medical supplies, food and clothing to assist the refugees concentrated in proximity to the city of Goma in Zaire. Over 200 IDF soldiers and officers spent weeks in a field hospital providing medical care.

In August 1998, terrorist attacks struck American embassies in Nairobi, Kenya, and Dar-es-Salaam, Tanzania, killing over 200 people and wounding over 5,000, Israel offered assistance to the United States.

The IDF teams arrived with sophisticated technology, doctors and rescue dogs. They began operating in the disaster site just 23 hours after it received its first order.

Israel was the first delegation to arrive on the scene from abroad. Less than seven hours after arriving, the IDF rescued a survivor from the rubble, and then saved another two people.

In January 2010, a 7.0 magnitude earthquake struck the impoverished nation of Haiti in the Caribbean. The quake led to the death of tens of thousands of people and left more than a million Haitians homeless.

Again, Israel sent a rescue team of over 200 people comprised of doctors, volunteers and an IDF search & rescue unit to Haiti. They immediately set up a sophisticated field hospital fully equiTed for surgical operations and subsequently saved hundreds of lives.

The list is endless of the places around the world where the IDF has provided supplies and saved people in their time of need, from Turkey during the earthquakes in 2011 to the storm-ravaged Philippines in 2013 to helping the USA during Hurricane Katrina.

Even during this war when Gaza is shooting rockets, trying to kill Israeli’s, Israel is sending food, aid and humanitarian assistance to the Palestinian people.

Most Israeli soldiers I’ve met, love life and helping people; they are your average eighteen year old kids who are excited about the world, about travel and about having fun, studying and figuring out what they want to do with their lives. Military service is mandatory, so even if you are an eighteen year old with big dreams of doing something other than the military, chances are you have to put them on hold for at least two or three years until you complete your service.

Every soldier who is on the front line and has made the ultimate sacrifice for Israel must be remembered and honored for their service. They are the ones who are standing up to Hamas, and the first line of defense in preventing the world from turning into a place where freedom is outlawed.

Israel’s neighborhood is a rough one. On the first day of her creation, five Arab nations tried to wipe the newborn off the map and the violence against Israeli’s has continued until today.

If Israel’s neighbors didn’t shower the citizens of Israel with thousands of rockets and build tunnels of terror created to kidnap kindergarteners and kill their parents, as well as plan suicide missions to murder and maim innocent people, perhaps Israel would not need to have a powerful military.

I’m betting that if the Middle East was a peaceful part of the world, chances are most young people wouldn’t be in the military but would join the ranks of the millions of Israeli’s who create technology that help people globally such as the cell phone or the pentium microprocessor in your computer that is allowing you to read this article.

However, the real world dictates that not only does Israel need to be strong militarily and emotionally, Jewish people worldwide need a homeland so the alternative if they need to escape from a different country is not a certain death as it has been for generations.

About the Author
Masada Siegel is a freelance journalist who worked as a field producer for CNN and Fox News Channel in NYC. She is a public speaker on topics such as International Relations, Crisis Communications and Travel. Masada has a Master's Degree from Columbia University in International Media and Communications with a focus on the Middle East. She is also the author of 'Window Dressings". Sign up for her newsletter at www.masadasiegel.com and follow her on Twitter @masadasiegel for worldwide updates.
Comments