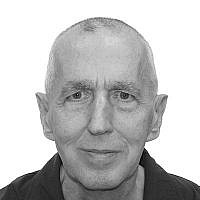 The Blogs
Will Crawford
Apply for a Blog
Advertisement
Please note that the posts on The Blogs are contributed by third parties. The opinions, facts and any media content in them are presented solely by the authors, and neither The Times of Israel nor its partners assume any responsibility for them. Please contact us in case of abuse. In case of abuse,
Report this post.

This September 50 years ago, the world witnessed the murder of 11 innocent Israeli athletes at the Munich Olympic Games. The following story demonstrates that they did not die in vain.

The story begins in Passau, Germany, the final destination on a hiking holiday arranged by Das Deutsche Jugendherbergswerk. As I was taking leave of my German companions, news came through from Munich about the terrible events that had unfolded at the Olympic Games. The group was shocked and upset.

On the long train journey back to England I could not but reflect at length on what had happened at Munich and the tragic nature of the Israeli-Palestinian conflict, two peoples, victims of history, one people, the survivors of the Holocaust, for whom the messianic dream of next year in Jerusalem and the need for a sanctuary outside the hell of Europe suddenly became an urgent necessity, and another people required to atone for a crime that they did not commit, by losing their land and their homes. But Munich was not the answer to this tragedy. There had to be a nonviolent alternative.

After time as a kibbutz volunteer and a teaching assistant in UNRWA’s schools in Jordan, I wrote my first critique of the indiscriminate nature of PLO resistance strategy, and the case for a nonviolent alternative. It was eventually published in Arabic under the title Higrat Al-Awda and in 1990 inspired a peace march in Jordan, when an unprecedented number of 40,000 participants marched towards the Allenby bridge to show solidarity with their compatriots during the first intifada.

I wrote a second thesis, titled Intifada 2000, after the signing of the Oslo Accords, analysis of which led me to conclude that the hopes of a permanent two-states solution in 1999 were entirely misplaced, and that the subsequent disillusionment would ignite another intifada in 2000. The paper warned against an armed uprising and offered a credible and effective multi-faceted nonviolent resistance strategy to extract tangible concessions from the Israeli government. It was circulated to interested personages, including the PLO’s London representative, Afif Safieh, who sent copies to a number of Palestinian institutions. Another was the Egyptian journalist, Abdel Hakam Diab, who proceeded to translate large sections of the work into Arabic that were published by Al-Quds Al-Arabi in 1997. The impact of their publication was profound. A family friend, Adeeb, who was working in Nazareth phoned my wife, Amal, to ask her if she realized what her husband had ignited, informing her that everyone in the Arab towns of Israel and the West Bank was talking about an intifada in 2000.

In 1999, I traveled to Lebanon and arrived at a auspicious time. Arnoun, an Israeli-occupied village in South Lebanon, had just been liberated by a Lebanese peace march. I therefore found myself pushing at open doors when advocating action on similar lines to liberate the rest of South Lebanon and to support a Palestinian intifada.

While in Lebanon, I had meetings with the leaders of the Palestinian factions there, including Sultan Abu Alaynen, the head of the PLO and Fateh in Lebanon, who was very supportive of my proposals and recommended them to Farouk Kaddoumi and Yasser Arafat. Later that year an updated Arabic version of the thesis was published by Al-Mustaqbal Al-Arabi, the Arab World’s leading political and socio-economic journal.

A triumphant civilian march into occupied South Lebanon did finally take place in May 2000. What followed was the disintegration of the South Lebanon Army, a less than orderly Israeli withdrawal, the abandonment of military hardware, and images of Israeli defeat for which Hezbollah took all the credit, much to my chagrin. The political consequences were profound. The militants among the Palestinian ranks were emboldened, and my hopes of a nonviolent intifada that would positively reach out to the Israeli public, were destined to be dashed. However, the intifada that broke out in September was essentially nonviolent in its early days. In Jordan, 25,000, including members of parliament, took part in a march of return in October.

Tragically, the intifada soon turned into an armed uprising which I could not support, and was a disaster for Israeli-Palestinian relationships. In 2002, the Centre for Arab Unity Studies in Beirut published an anthology titled The Arabs – Where to? in which the Israel-Palestine section was devoted to a reprint of my thesis, a reflection of the regret that the intifada had gone off-script.

There are many reasons why the Oslo process has failed to bring a permanent peace between Israelis and Palestinians, but among those reasons is the fact that it crossed too many red lines on both sides of the divide, generating violent responses from its opponents. Among Palestinians there are now serious divisions, particularly in respect of the one-state/ two states question, divisions that have led many Israelis to fear quite legitimately that simply ending the occupation in the West Bank will not bring them peace.

To address these issues, I embarked on a third thesis which was published by Al-Mustaqbal Al-Arabi in December 2019, which offered a vision and a detailed blueprint for two states that both Hamas and Jewish settlers could live with. Its publication was remarkable. Al-Mustaqbal Al-Arabi is the Arab World’s most prestigious political and socio-economic journal issued monthly. They led their November 2019 issue with an analysis of the forthcoming Trump plan, and then my thesis led the December issue. It was as if my thesis was being treated as an unofficial Arab World’s response to the Trump plan, something made more remarkable by the fact that I am a non-Arab who is not a renown academic or politician. But it resonated with the many academics who performed its peer review, and is testament to its credibility, winning much international praise. And one day I genuinely believe that it will be the basis for a real and lasting Israeli-Palestinian peace.

The Israeli athletes at Munich did not die in vain.

About the Author
Will Crawford is now retired and fighting cancer and its sequelae, after a long career in international banking operations and audit, the last 12 years of which was as a senior auditor with the Europe and Middle East Division of Japan’s Mizuho Bank. He has written a number of influential papers on the Israel-Palestine question which have been translated and published in Arabic, including Palestinian Exodus/Higrat Al-Awda, Intifada 2000/Intifada Al-Awda and Palestine – Where to? /Filastin - Ila Ayn?
Related Topics
Related Posts