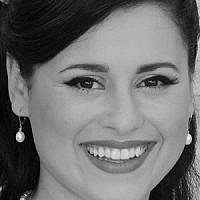 The Blogs
Batya Brownstein
Apply for a Blog
Advertisement
Please note that the posts on The Blogs are contributed by third parties. The opinions, facts and any media content in them are presented solely by the authors, and neither The Times of Israel nor its partners assume any responsibility for them. Please contact us in case of abuse. In case of abuse,
Report this post.

Lately, right wing factions of the government, especially Prime Minister Netanyahu, have come under fire. The recurring point of contention? This idea floating around the world, exacerbated by the Israeli left, that the right does not want peace.

This anger seems to have resurfaced with the passing of former Israeli President and statesman Shimon Peres z”l last week. Already high tensions were made more palpable when the Prime Minister walked past Palestinian Authority President Abbas without shaking his hand (after having done so before the ceremony) and did not acknowledge his presence in his eulogy. Now the US State Department is condemning Israel’s decision to build 300 new housing units in the West Bank. Although there is seemingly no connection between the two, they are examples of this decades- old international belief that because the Israeli right- wing does not believe in the possibility of a two- state solution to the conflict, it does not want or seek peace.

In a September 29th article in the Atlantic by Jeffrey Goldberg titled “The Unbearable Smallness of Benjamin Netanyahu”, which he writes under pretext of praising Peres, he goes so far as to say: “It is Netanyahu who symbolizes the Israel of the blind, the Israel that ignores the crumbling status quo, the Israel that has convinced itself that its hundred-year war will go on for another thousand years, the Israel that lives a Judaism out of balance, tragically captive to the rock-worshippers of the settlement movement.”

It’s that last bit that gets me. I won’t go into the intricacies of political disagreements, but to label an entire community “rock-worshipers”? While that certainly crosses a line, it is sadly a commonly expressed sentiment, and it’s there that my problem lies. This grotesque and unfounded theory that the right (in particular the Religious Zionist movement and the settlement) values land over life and will go to any lengths to keep it is horrifying and untrue.

The most common basis for this sweeping generalization is that it is a sin for Jews to give away Holy land, even for potential peace, when in fact only a fringe minority of radicals claim that as a reason to protest a two- state solution, and not the pure and simple fact of the danger to Israel’s security were such a solution to be conceived and implemented.

The reason that the right protested the Gaza Disengagement of 2005, in which thousands of Israelis were forced to leave their homes in order to give over the entirety of the Gaza strip to the Palestinians, was largely based on security. While I’m at it, I’d like to point out that no Israeli on the political spectrum has ever made the absence of Israeli Arabs and Palestinians in Israeli territory a condition for peace.

In hindsight, wasn’t the unwillingness of the right to give away land completely warranted? Didn’t it, in fact, predict the exact dangerous situation in which Israel finds itself today as a result of its efforts to do absolutely anything for peace? Giving Gaza back didn’t bring peace, it brought rockets, terror tunnels and more Israeli deaths. So why on earth is there still talk of giving back more land, and why, when I express these thoughts, am I automatically branded a “rock-worshiper” and accused of not wanting peace?!

I want peace just as much as the left does, and so does the rest of the majority of the right. In fact, living over the Green Line, I have MORE reason than most of the left to want peace and have suffered more stones through my windshield than (I assume) most of them have.

I don’t believe in a two-state solution because we experimented and it did not work. My protest is 100% security based, but the fact that many members of the right do not necessarily disagree with the Jewish ideological historical, religious, and political claims to Israeli soil does not strip either our political stance or said ideology of legitimacy. None of this means that I don’t want peace or that I don’t think that peace is possible, just because I don’t think the left’s solution is the right one. And people who say that the right is content to live with this reality and not think of other solutions clearly don’t know much about politics (i.e Naftali Bennett’s annexation plan. While not ideal or perfect in any way, it’s proof that the right is not sitting on its tush enjoying the bloodshed).

So before accusing the right of not wanting peace, why don’t we all consider that.