Many blog posts I have written about the decline of the once fine newspaper the Jerusalem Post. When the money was lacking, instead of closing, it fired many of the writing staff. A few excellent writers continued now writing blog posts, it threw in big pictures, and the paper was saved.

Problem is that many people still think it’s the quality paper it once was. So, they take seriously what it says. Even when it writes total nonsense about Arab-Palestinian affairs and the ‘peace process,’ places ads written as news reports, and spreads slander about the Orthodox-Jewish world.

It still has good stuff about feminism, LGBTQ, anti-racism, and the IDF.

About COVID it published good analysis alternating with total nonsense from Reuters. It maintained its old hatred for Netanyahu and Orthodoxy. And it has a headline writer who can ruin any decent piece of writing.

But now, it has fallen to a new low. It blamed, in an ‘analysis,’ Netanyahu for the dead in Meron and for the thousands of deaths from COVID! This is written by their science reporter who wrote the good articles about the pandemic and who’s a rising star at the Post. It’s embarrassing.

I’ve never seen so many negative comments under any article in any online Israeli newspaper. And those are the comments they didn’t delete. I commented on a comment and both of them were removed. Normally, the Post retains all comments. They must have learned that there is no such thing like a bad press. Well, read the JPost and see that’s not true.

I wrote that, while the dead were barely buried and the families were sitting shiva, was it so urgent to find fault? Was sowing division the price to pay for not wanting to mourn? What happened to loss uniting us?

And when 100.000 left-wing demonstrators protested Bibi during a pandemic, did it also fault the government? But when 100.000 Charedics flock to Meron after the pandemic, Bibi is at fault? And he’s also at fault when they didn’t follow scientific corona advice? What’s the last time you did anything against Charedic children not learning science in school? And how do you expect them to follow that, if they are unfamiliar with it?

And what is any PM supposed to do when large sections of the population don’t obey? Shoot them? 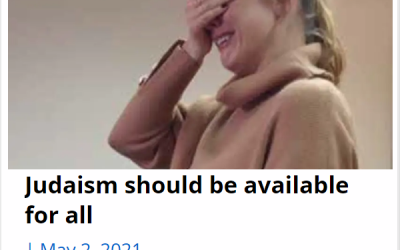 Screen grab of the removed editorial.

May 2nd, at 20:35, the Post expressed happiness about the High Court ruling in favor of the non-Orthodox, a full month after the ruling: “Judaism should be available for all – editorial.” Someone commented that this is so low, after the Meron disaster to write such an old item just to give the Orthodox another blow. I agreed. And then the Post completely removed the editorial. Do they read comments? After an hour, the piece returned but only for a few minutes, then being overtaken by the above editorial.

Meanwhile, its ‘religious reporter’ explained why the whole disaster at Meron was Aryeh Deri’s fault – another fall guy of the JPost for years. He had argued that corona in Israel was over so that no social distancing was needed. And then, when crowdedness led to another disaster, he’s still to blame. You just smell the hatred that such an opinion must be based on.

And in the morning, they had a long piece in which again the ultra-Orthodox were the villains. It twisted it as follows. Recently, some nationalistic-Orthodox extremists and Arab-Palestinian youths confronted each other bloodily. This, after the latter attacked ultra-Orthodox Jews for no reason. But, the Jpost’s reason for the confrontation? The ultra-Orthodox attract extremist right-wing ideas. (The Arabs and West-Bank ultra-nationalist Jews were not involved, you see.)

We already have Haaretz and Al Jazira. There is no market for the vitriol that seems to be the Post’s new course. Diversity of the press is only useful as far as the individual outlets inform. If they just incite, who needs them?