Everyday, a new headline in the news, or a pro-Israel organization is sharing information about Jews in every area of American education that is frightening. 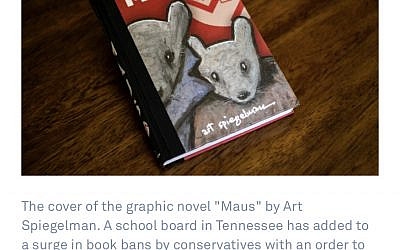 You can agree or disagree with the New York State decision to bring standards into yeshivas, but it is universally acknowledged that Jews are singled out as targets.  You never see The York Times write a front page story about the below standards of the school I taught in which was run by minorities who were involved in criminal activities that they were arrested for.

You never see a major network opening a show about the attacks everyday on college campuses to students or the staff that is more conservative.

School curriculum is filled with misinformation about Jews and Israel.

We need to make changes in the programs teaching our very young.  After all, cognitive development starts and peaks between the ages of 5-8.  By the time students arrive in college, they are trained to share the lies they were taught and agree with professors who deny the Holocaust and make claims about Israel and apartheid.

The Jewish education crisis has been building for several decades. It didn’t start on college campuses.  It started in elementary schools where Jews attend, work in and pay taxes for.  The crisis continues in private schools where some of the services are received through public schools. We need to blame both political parties for this movement and take a look at what happened over the past couple of decades and fix it now.

Today’s American Jews seem to be either the activists or the enablers in the education failure crisis.  We are taxpayers, educators, students and parents.  We aren’t doing a good job of protecting ourselves and our interests in private, public and homeschooling.

It seems as if nobody has done more to hurt education and incite hate more than Jewish Randi Weingarten.

While  it’s been reported that Weingarten makes $500,000 annually, under Weingarten’s watch the AFT has pushed back against schools reopening post Covid-19, flown in the face of CDC guidelines by foisting mask mandates on school districts and promoted a progressive agenda that includes the tenets of Critical Race Theory turning classrooms into frontlines in an increasingly divisive political and cultural war.

It seems she wouldn’t single out Blacks or Hispanics in a tweet like she criticized Jews in tweets last year,  “And they needed power to have enough income and wealth for their families that they could put their kids through college and their kids could do better than they have done. Both economic opportunity through the labor movement and an educational opportunity through public education were key for Jews to go from the working class to the ownership class. American Jews are now part of the ownership class,” she said. “What I hear when I hear that question is that those who are in the ownership class now want to take that ladder of opportunity away from those who do not have it.”

Weingarten’s leadership, first as head of NYSUT and now AFT, both powerful unions, which were started to protect all people by Jews who reacted to poor working conditions, now has become seemingly anti-Semitic. Under her leadership, teachers unions nationwide have been singling out Jewish issues and staff negatively.

Sadly, Weingarten has assistance filling classrooms with biased curriculum and staffing practices from Jewish union staff and educators.  They witness prejudice against Jews everyday.   They remain silent, or worse, carry out questionable union policies for fear of retaliation and harassment like I received for speaking the truth, filing a lawsuit and subsequently getting through an illegal retaliation termination in a “kangaroo court” where submitted documentation and witness testimony proved laws were broken and contractual obligations deliberately not carried out, hurting everyone, including the few Jews on staff.

How else could you explain:

In 2006, a professional development workshop was attended by about 40 teachers.  The topic was “gang awareness.”  Rafiq Mohammed from the Giant Thinking Association gave a presentation insinuating that the Jews of Williamsburg have all their money and manipulate the power structure and employment.

About the Author
Cindy Grosz is The Jewess Patriot, Today’s Premiere Jewish Activist syndicated through Conservative Television of America, Real Talk Radio and the Black and White Network. The show streams through RokuTV, Amazon FireTV, iHeart, Spotify and Deezer and out of Israel through Jewish Podcasts. She is the chair of Jewish Vote GOP and a Jewish advisor for many 2022 candidates. Her lawsuit against the NYCDOE exposes scandals and corruption within public schools and discrimination against Jews. She also writes about entertainment, food, culture and social issues.