President Donald J. Trump isn’t antisemitic.  He is frustrated and wanting answers as to why he received less than thirty percent of the Jewish vote in 2020.

As a television and radio host, as an activist and as a Zionist who works with non-Jewish supporters, I am asked this question too many times,  “Why don’t American Jews support Donald Trump when liberal Israelis advocate for his return to The White House in 2024?”

Are American Jews better off than they were before November 2020?  The answer is obvious.  Are American Jews safe in the United States today?  The proof is in the rise of antisemitic hate crimes.  Are American Jews united in the facts that they fear the lack of economic security?  One has to check bank accounts and retirement savings and see the depreciation for the answer.

American Jews are united in anger, fear and frustration regardless of where they live, religious practices and age.

I had numerous conversations with teachers who didn’t vote for Trump admitting they benefited from his economic success overlapping with their retirement and stock option accounts.  First time homeowners benefited from lower mortgage rates.  Trump gained Democratic supporters of medical freedoms and vaccine choices, especially in the young independent voter area.

The accomplishments stand on their own.  They need no explanation.  Any common sense voter regardless of party affiliation needs no further proof.

Trump welcomed his daughter’s marriage to a Jew and understands their observant lifestyle.  Biden’s daughter Ashley, married Jewish Doctor Howard Krein in an interfaith ceremony but is a practicing Catholic.

Biden has appointed a large number of Jews in cabinet and high profile positions.  However, most have been involved in creating  the problems of the economy, border security, international relations, medicine and education.  These Jews encourage antisemitism as haters found visible Jewish scapegoats for money and security issues.

President Joseph Biden said in October that “he is more Jewish than Jews” yet he has never signed an executive order about antisemitism despite calls from elected officials and Jewish public figures to do so:

I stood inches away from President Donald J. Trump when he signed the Executive Order Combating Antisemitism in December 2019: 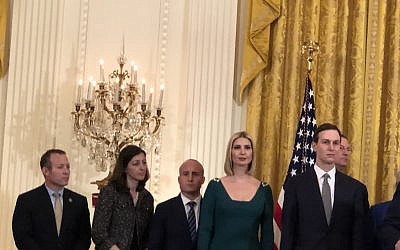 Soon after, they voted to impeach him.  They never spoke up for disciplinary actions against their antisemitic colleagues from “The Squad.”

There is no moderate Democrat.  Voting records prove it.  Aren’t you tired of the double standards of disciplinary actions against republicans while democrats remain silent?

Trump Has To Distance Himself

President Trump can convince democratic and independent Jews and other minorities to vote republican down the line with him on top of the ticket if he publicly makes a statement distancing himself from people like Kanye West.  He needs to make clear that he doesn’t stand for antisemitism.  He needs to make a statement that includes thanking for the support but they disagree on Jews and Israel, Holocaust denial and boycotts.

Trump had many confidants who really didn’t give him good advice and/or show allegiance to him or his office.  He seems to be doing this again, turning off Jewish supporters (as well as others).  He needs new staff and advisors.

Many Jewish communities are often ignored by republican committees and leaders except for money or if they are in a swing area.  Wins come in every state and in local, state and national elections.  He can’t depend on county chairs, elected officials or appointed judges.

Trump should brag about the historic American-Israeli accomplishments of 45.  But, please President Trump, you need huge majorities everywhere to accomplish everything that needs to be done for Jews and every other legal citizen to Make America Great Again during 47!