“The Sky Is Falling,” Chicken Little

“American Jews and Israeli Jews Are Headed for a Messy Breakup,” The New York Times

If one believes the rhetoric of modern prophets such as Peter Beinart and his patrons at the Forward, Jewish college students will abandon Israel en masse if Israel and American Jewish leaders don’t change direction and fast. “Birthright Will Fail If It Doesn’t Evolve With Young Jews” declares the self-proclaimed Jerimiah of the 21st century. This overly trodden path continues in the direction Beinart began in 2010 with his now famous essay in the Jewish Review of Books and expanded, this time if you want to spend the money, in a book-length version, The Crisis of Zionism.

To be fair, Mr. Beinart recently crafted a powerful piece asking young Jews to stay the course and recognize the modern miracle which is the State of Israel. This well-argued plea is probably the best specimen of the genre I call “Loving Ugly Israel.” However, that is for a different discussion. The question before us is the claim that American Jewish college students are alienated from Israel.

Despite the noisy clamoring of a handful of members of the student group IfNotNow (INN), it’s not so clear how many students, Jewish or otherwise, are turning against the Jewish State.

Over the past two vacation seasons, INN has organized a few Birthright walkouts. According to various reports, over the past two years, 22 students have either walked off or been removed from the ten-day free trip to Israel.  INN participants are young and adept at using social media. Taking advantage of unsuspecting guides, these students stage videos where they make demands to change the schedule of the trips to accommodate their left-wing political agenda. One student on the all-expense paid luxury tour cried that she has never done anything as hard as walking off the fully funded vacation. She and others proceeded to visit illegally built Palestinian homes scheduled for demolition.  These students cynically created GoFundMe campaigns to harvest thousands of dollars to pay for their trips home. Ironically, they raised and spent more money on their protest than the people whom they claim they were trying to help make in a year. These brave soldiers of YouTube made their mark, and that seems to be what, in the end of the day, counted.

Despite the carefully orchestrated, recorded, and funded walkouts, these protestors represent a drop in the Birthright bucket. That is the key. Of 650,000(!) students who have visited Israel through the Birthright program, a fraction of a percent walked off. Let that sink in. Despite the videos and the handwringing, a negligible fraction of a fraction of a percent was moved to protest the trip. I know companies that dream of that level of popularity and customer satisfaction.

We know things are not all rosy between Israel and American millennials. As Jonathan Weisman, deputy Washington editor of the New York Times, so joyfully spelled out in an error-ridden article in the Sunday Review, there are many areas where American and Israeli Jews don’t see eye to eye.  Reviewing well-known disagreements from general voting patterns and support for President Trump to Israel’s warming relations with foreign countries with poor human rights records and different religious sentiments, Weisman bombards the reader with food for thought: some of it true, much of it not. Glaring mistakes include repeating a disproved libel against the Chief Rabbi of Israel, misrepresenting President Trump’s visit to Pittsburgh,  and crude distortion of American Jewish history.  Mistake so basic and blatant that, as others have pointed out, the Times had to correct a quote of Weisman’s own rabbi even though the transcript of the sermon quoted was readily available online.  Like Beinart’s latest missive, this piece serves primarily as an advertisement for Weisman’s recent book. One only hopes that the fact checkers at St. Martin’s Press did a better job than the ones at the New York Times.

Herein lies the real problem with the new wave of “the Jewish relationship is failing” chicken littles. Writers like Beinart, Weisman, and the various rabbis both right and left are trying hard to sell a narrative which sells books and raises money. “The campus is burning, read all about it or donate here.” Is this an accurate picture of reality?

During a panel discussion at the John Paull II Center Lecture held at JTS in 2014, the year of Operation Protective Edge, Imam Abdullah Antepli of Duke University pointed out that 30% of Muslim students at Duke didn’t want to discuss or have anything to do with the Israel / Palestine issue. They were sick of it. He said that an Israeli professor headed the chapter of Students for Justice in Palestine whose members are mostly Jews. One might say this proves that American Jews are indeed turning against Israel. They might be; however, pictures on Facebook from vigils they held protesting Israel’s involvement in Gaza seem to show only about 25 people, including someone who looks like the Imam himself, in attendance – many in hijabs. One gets the impression that not too many students are interested at all and most protesters are Muslim.

Further, in that same discussion, Professor Mehnaz Afridi, Director, Holocaust, Genocide & Interfaith Education Center and Associate Professor, Religious Studies of Manhattan College, herself a practicing Muslim, lamented that the topic of Israel is on the agenda of American colleges at all. She suggested that “we live in the United States and we tend to forget that.” But I don’t think most Jewish students do. 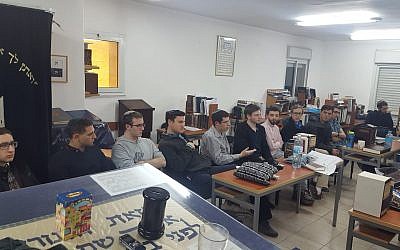 One of the wonderful programs at my yeshiva is named “Recharge.” The yeshiva invites alumni to return for an all-expense paid two-week learning experience. During the two weeks, we ask our college alumni to speak on a panel addressed to our gap year program students. Moderating the panel, I asked our returnees to talk about many issues including the attack on Israel on campus. The students represented a variety of both public and private colleges both big and small. They replied that the anti-Israel voices are almost non-existent. The few programs supporting Boycott, Divest, Sanction or SJP and INN are negligible. Most college students,  our alumni suggested, don’t care about politics. Beyond a few vocal and social media savvy handful, they are not protesting.

What about the massive drop in Birthright’s numbers this winter? Surely that indicates the anti-Israel crowd is having significant impact Beinart and Weisman warned us about! Indeed, Haaretz, the extreme-left Israeli paper, jubilantly declared such a drop back in December. Once again, we may be victims of false reporting. Hillel International, Birthright’s largest recruiter, claims its numbers are the same as last year. As reported in the Times of Israel,  Matthew E. Berger, Vice President of communications for Hillel International, said that “Hillel International is pleased that our Birthright Israel recruitment remains steady since last winter, with nearly the same number of participants and buses as a year ago. “

What about the campus culture? It seems too much for either Beinart of Weisman to ask them. However, I did. My students tell me that many Jewish college students are apathetic. That is the critical problem American Jewish leaders need to address. The American Jewish college students who do care about Judaism and Israel are still visiting in droves.  They support Israel despite the highly financed campus visits by a barrage of groups critical to Israel.

This past year Israel enjoyed its highest number of tourists. Over 4 million foreigners visited the country. Of those, travelers on Birthright and other programs aimed at Jewish college students represented a small but essential fraction.  None-the-less, they came, they enjoyed, and returned empowered and connected.

Sometimes, it seems, we Jews don’t like good news. It’s time we stopped listening to the bearers of false facts and appreciated what we have. To paraphrase a well-known naysayer, maybe it’s time to “leave the kids alone. “