The Blogs
Susan Barth
Advocate for Marriage Education in Israel
Apply for a Blog
Please note that the posts on The Blogs are contributed by third parties. The opinions, facts and any media content in them are presented solely by the authors, and neither The Times of Israel nor its partners assume any responsibility for them. Please contact us in case of abuse. In case of abuse,
Report this post.

The focus on the journeys of life has never been so epitomized than in this week’s Torah portion of Massei and the daily tragic events unfolding in the aftermath of the Surfside collapse.

The Torah portion of Massei details a listing of the 42 journeys and encampments of the Israelites from the Exodus to their encampment on the plains of Moab across the river from the land of Canaan.

To me, it lists like an exhausting travelogue of names that one would be hard pressed to remember or consider more than non- distinctive service stations along Israel’s Highway 6.

And yet, the mere fact that they are recorded in the Torah, which is very precise about each word included in this holy blueprint for life, signifies that there is a lesson to be taken from each pit- stop along Israel’s forty year sojourn in the desert. The clear message is – to stop and pause and pay attention to the journey itself and to use each stop as a place for reflection.

Childhood Journeys – Are We There Yet?

I remember as a child growing up in Texas that our summer vacations included road trips to both the east and west coasts. Along the way, I was intrigued by the presence of what seemed to be an endless number of locations for a particular roadside convenience store chain found on highways throughout the United States known as Stuckey’s. It was not the store itself, which was generally very small, but it was the fact that the minute you left the parking lot, there was a prominent road sign displayed that announced “X MILES to the Next Stuckey’s.”

That marker always represented that the journey was “on the move” to the next road stop. I am sure that almost all of us have some memory from our childhood trips that stand out about the “journey” and unfortunately for many they were just annoyances that stood in the way of where we left and how soon we were going to arrive at the destination!

The Journey Unfolding at Surfside

This week’s heartbreaking decision by the authorities to shift the rescue efforts to recovery as reported by the Times of Israel also represents another tragic phase in the journey for the family members and first responders in Surfside. As the tragedy has unfolded since the collapse, many of us who did not have any connection with the area, became acquainted with the names and faces of those residents of Surfside who we hoped and prayed survived the collapse.

Whose heart could not become transfixed with the hope that a survivor would be found after the first day. And to ache for those families who now are faced with grim realities of burials instead of reunions. For too many, the journey of their life ended far too early and in such a tragic manner.

What struck me the most were the stories of those among the now deceased and the missing and unaccounted who were engaged and newly married individuals. For those individuals, they will never have the ability to start their marriages and experience children and the journeys of life.

As I wrote in last week’s blog, Surfside and Yearning for Shalom, Chabad Rabbi Sholom Lipskar, the Shaliah and founder of The Shul of Bar Harbor, emphasized the best response to the tragedy by citing the need for giving extra love, empathy and doing good deeds and studying Torah. Towards that end, I want to share my own new reflection on how to memorialize the victims of Surfside and especially the engaged and newly married ones.

The Case for Marriage Education

About a year ago, our non profit Together in Happiness/B’Yachad B’Osher published a 45 page compendium entitled The Case for Marriage Education along with 5 other White Papers which are excerpts of The Case. The publication is free and downloaded on our website www.together-in-happiness.com

What the Case does is define in various ways the harmful effects which divorce has on the couples and Israeli society in particular and the importance of marriage education as a response. However, what I have come to realize is that what we really need to focus on is the more positive and optimistic importance of marriage and why it is essential for our survival as Jews and particularly in Israel where divorce is becoming more rampant.

Project Chayei Sarah dedicated to the memory of Surfside victims

What is needed is a cultural change which makes marriage and marriage education a part of the fabric of our society. We introduced Project Chayei Sarah in a previous Times of Israel Blog as a path for making that cultural shift for marriage as an institution of choice.
The six suggestions for achieving the cultural change are included in the picture below: 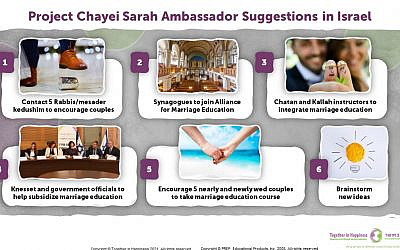 On behalf of our non profit Together in Happiness, founded in memory of my beloved parents, I want to dedicate Project Chayei Sarah to the victims of Surfside, and especially to those engaged and newly married couples whose death represents the end of their journey.

Let Us Transform Tragedy and Make the Journeys Count

As we enter into the month of Av, it is a moment to reflect on our own journeys on a personal and historic level. The wanderings of the Jews in the desert as depicted in the Torah portion lead up to the door of Eretz Yisrael.

Those of us who have the privilege of living here know how precious life can be surrounded by so many enemies ready to destroy us. But just like the Jews destroyed the enemies in the desert, we to can combat our internal and external enemies and celebrate life in the Third Temple that won’t be destroyed.

And in the meantime, we need to help heal the heartache in Surfside by cherishing our loved ones and making each journey count on the road to transforming Tisha B’Av from sadness to one of joy.

My prayers are with the victims and the families at Surfside and may they find solace and comfort for each of their respective final and ongoing journeys. And again, a special recognition and thanks to the first responders and especially the ones from Eretz Yisrael.

About the Author
Susan Barth is founder and director of Israeli non profit Together in Happiness/B'Yachad B'Osher, promoting stronger, healthier marriages impacting Israeli society. A Project Management Professional (PMP) and businesswoman from the US, Susan sponsored and chaired the First International Conference on Marriage Education in Israel (attended by over 360 professionals) in Jerusalem in memory of her parents and launched I-PREP, an innovative marriage education curriculum. On November 8, 2017, Together in Happiness co-hosted with MK Yehudah Glick a historic Knesset seminar promoting government support for pre-marriage education
Related Topics
Related Posts
Comments
Advertisement