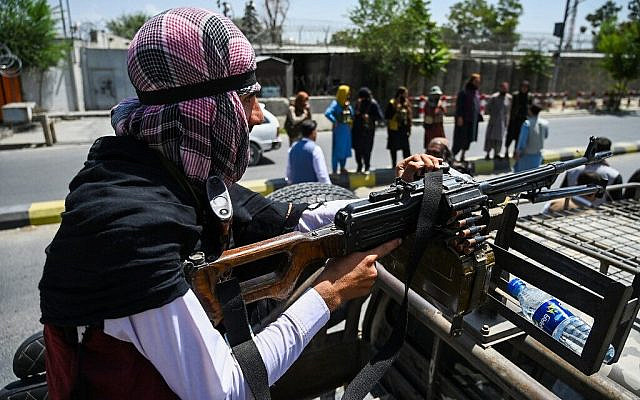 A Taliban fighter mans a machinegun on top of a vehicle as they patrol along a street in Kabul on August 16, 2021, after a stunningly swift end to Afghanistan's 20-year war, as thousands of people mobbed the city's airport trying to flee the group's feared hardline brand of Islamist rule. (Wakil Kohsar / AFP)

If one wanted to see what American surrender looks like, it was obvious for the world to see on Sunday. The Taliban, the same group that the USA invaded Afghanistan to destroy 20 years ago after the 9/11 attacks, finished its sweep of the country and entered the presidential palace. The United States, the great United States that once defeated Hitler, won the Cold War with the Soviet Union, and spread its capitalistic, democratic ideology worldwide, seemed helpless as they raced for the exits. Defeated by the same terrorist army that they fought for 20 years, but were virtually bowing to, as Biden refuses to fight.

I remember, as a teenager, the US entrance into Afghanistan after the horrendous 9/11 attacks. The air campaign, the Northern Alliance (Afghan resistance movement) conquering Mazar-E-Sharif and later Kabul with strong logistical support. Osama Bin Laden was killed a decade later in Pakistan. Mission largely accomplished, but not completed by any means, as NATO stayed on in its “forever” war. However, there was still a glimmer of hope, as a new generation of Afghans were being raised away from the Taliban’s extremist ideology.

Afghanistan is the graveyard of world empires. Alexander the Great faced difficulties pacifying it, echoed in the failures of the British Empire of the 19th century, and the Soviet Union of the 1980s. Would the USA defeat the odds and change the country into a modern democracy free of Islamism?

The answer is no. However, if one needed to downsize or to retreat, one should have done so while carefully maintaining national honor on a project that was so costly in blood and treasure.

Many argue that Afghanistan was a lost cause, that 20 years of investment simply did not achieve its goals or aims. It was previous president Donald Trump who signed a deal with the Taliban to be out by May 2021. However, that deal was dependent on a political solution being arranged in Doha, Qatar. The hasty execution of Trump’s deal, this time with no political leverage, was conducted under Joe Biden’s watch. It seems that the United States has forgotten that it is still a superpower. “It is all Trump’s fault” is not an adequate defense as the USA spends hundreds of billions of dollars in defense every year. Would another bombing campaign really have cost the United States? Couldn’t the USA transfer the prisoners at Bagram base, some of the world’s worst Islamists, to another facility instead of having them released and entering the Taliban’s ranks? More and more, the PR of it all shows a tired, bankrupt giant racing for the exits. “Please don’t kill us,” seems to be the message the great American army is sending to the same terrorists that were accomplices for planning the September 11 attacks.

Many compare what is taking place, with Americans being airlifted out of the embassy in Kabul to Saigon in 1975. However, let’s be clear: this is not Saigon. Saigon happened two years after the United States pulled its troops out of Vietnam. There, it was a slow spinning defeat. Here, the sweep took slightly over a week. The Afghan army, with its American training and hardware, simply melted away and did not fight back. The United States, for its part, made it clear that it will not fight back, focusing on evacuating its personnel from the country, including under fire. Even the withdrawal from Iraq and Syria of previous administrations, both leading to consequences, was nothing compared to what was witnessed while President Biden was on vacation and failed to address the world and his own people, as his military haphazardly quit Afghanistan.

The ramifications will come into play soon. Anyone who believes in American leadership in the world needs to take a hard look over what is materializing and question if one wants the backing of the United States. The Kurds already paid the price in Northern Syria and in Iraq under past administrations and we are witnessing the collapse of the Iranian nuclear deal largely with American indifference.

From Israel’s vantage point, I would look long and hard at my best friend. Will the USA come to our aid if another major conflict, say with Hezbollah, were to break out? If a nuke, G-d forbid, ends up striking Israel, will the United States help us strike back at our enemies? Even at the risk of losing military aid, Israel should be driven by an independent foreign policy aimed at finding common ground and new alliances. This has already started to happen under the new Abraham Accords and with an entente with Russia.

Comparable to the outcome of the Soviet retreat from Afghanistan in 1989 foreshadowing the imminent collapse of the USSR, this week’s events show a real present decline of American hard power. The American state itself is not threatened with collapse; however, the world we have all grown up in, the Pax Americana, is no more.