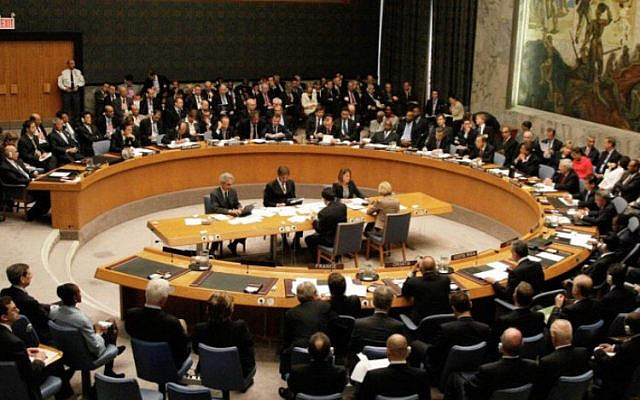 Photo from the UN

The United Nation’s Security Council, which is responsible for safeguarding international security and peace, should not remain silent against the genocide in Iran and interference of the Islamic regime in other countries. The Khomeinist regime after 40 years has become the godfather of terrorism and insecurity both inside and outside Iran and necessary evidence against this regime is not only available but the United Nations Security Council is well aware of this.

Since the arrival of the Islamic regime in Iran, the Khomeinist authorities have done everything from burning Cinema Rex in the southern Iranian city of Abadan, the occupation of the US embassy in Tehran, the brutal killing of dissidents between 1982 and 1988 and much more. All that was only part of Khomeinist ideology towards institutionalizing terrorism.

Direct support for terrorist groups, embassy bombings in Lebanon and Khobar Towers in Saudi Arabia, Buenos Aires AMIA bombing, killing opposition members and much more is all indicative of the regime’s actions in Iran. Unfortunately, the global community has chosen to stay silent, refusing to take any action.

It is time now, for the Security Council to take all the necessary steps against Khomeinist leaders.

What has been seen of the Islamic since its ominous inception is denials of responsibility, lying, and evading justice.

Today, the Islamic regime based on its old policies is taking pains to shift and distort the world’s attention from its countless crimes in Iran latest of which happened about two months ago, leaving 1500 dead Iranian protesters, by fomenting violence and chaos in Iraq.

About two month has passed from the Islamic regime’s brutal killing of unarmed protesters in different cities of Iran, yet there is no international organization in Iran to provide an official account of the murdered, wounded and disappeared protesters by the regime’s security apparatus.

Now it is clear to politicians who are aware of the situation, that the Islamic regime in Iran is the mother of Islamic terrorism.  The European Union which had chosen the carrot and stick policy not too long ago, today has chosen the appeasement policy. Is the world waiting for a major disaster?

Just a brief look at the actions of the Islamic regime since two month ago, provides a clear-cut example of the regime overall policies: the regime shot down the internet and massacres the protesters in order to remain in power; some of the representatives of the European Union and the United States condemned the oppression and demanded bans on the Islamic regime’s officials travelling to the EU countries.

Soon after brutal crackdown on Iranian protesters, the Islamic regime through its proxies attacked the US embassy in Iraq and fired missiles into US military bases in Iraq in order to shift the attention from the crisis in Iran and Iraqi people’s ongoing protests.

What is the international community’s justification in supporting the Islamic regime in Iran, after the deliberate downing of the Ukrainian International Airlines’ flight 752 which killed 176 onboard? How much more should this rogue regime do to face justice?

Tehran’s brass has proven time and again that it will not follow the rules and adhere to international law.

This regime must be held accountable for its crimes against humanity in a meaningful and serious manner under the United Nations’ Security Council chapter seven, otherwise Iran will face a disastrous future and European countries will have to deal with grave repercussions of appeasing the Islamic regime.

Liquidating of terror master Qassem Soleimani and his minions means that this regime will not end its terror campaign and must be dealt with through UN Security Council.

After killing Qassem Soleimani, the man responsible for slaughter and oppression, an international criminal with Iranian, American, Israeli, Syrian, Iraqi, etc. blood on his hands, some European Leftist, Feminist Islamist politicians in Europe embarked on their usual fallacious campaign that Donald Trump has started World War 3. It is clear that morally bankrupt politicians who support the appeasement policy toward the Islamic regime have turned a blind eye to the Middle East’s real roots of instability.

Meanwhile the Islamic regime sends its agents and operatives under various false titles abroad and deepens its malicious influence by building mosques and Islamic centers and penetrating the media in the West.

Any hope of reform or change of policies or behavior of the Islamic regime is a pipe dream. This regime has been founded on an Islamist revolutionary ideology and poses a constant threat to the world. We must never forget that this regime’s goal is simply, crimes against humanity.