If only teddy bears could talk? What would they teach us about killing and death? Would they discuss it? or is it a subject that makes us squirm and leaves us without any answers? The homicide rates are up this year since Covid 2020 has begun. It seems to me that someone should be discussing this. It feels like the homicide rate will continue to climb upwards unless we do something about it. But then what can be done? 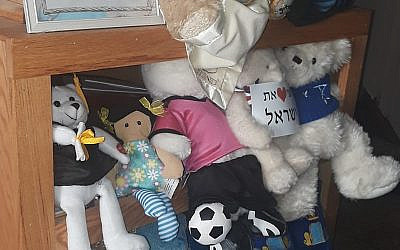 picture taken by Rabbi Claire Ginsburg Goldstein of toys not yet packed for Israel due to Covid 2020.

In this week’s approaching Torah portion, even Gd tries to prevent the first killing. It reads as if He knew that it was coming. He seemed to offer Cain a way out.

“And the LORD said to Cain, “Why are you distressed, And why is your face fallen?

Surely, if you do right, There is uplift. But if you do not do right Sin couches (rests)  at the door; Its urge is toward you, Yet you can be its master.”

I often wondered about this verse. It is quite cryptic and leaves the details out. Why? Wouldn’t it benefit us if we had more of the story line? What was Cain thinking? What did he say to Abel to persuade him to meet in the field? Whose field was it? Did it matter in the end what was said or who was the rightful owner of the field? What can the trope teach me about the verse? What can the verbs teach me about the action taken by Cain?

Let’s look at the trope to see what the Rabbis intuited.

“Cain said (spoke) to his brother Abel … }” One translation uses “Said” and the second uses the word “spoke”- which has more of an impact do you think? “Spoke”, is my guess. The Rabbis continue on to explain what was the conversation focused on. If it is “spoke”,  then it seems to imply that Cain, as the older brother, who thought that he had clout, was lecturing his younger brother Abel. The Rabbis add that the nature of their discussion focused on one of three topics as possibilities: 1) the ownership of the land, 2) religion, or 3) a woman. Cain had claimed ownership of the land since he was the farmer. He wanted recompense from Abel for the use of Cain’s land. Abel needed Cain’s land to graze his sheep that he used as sacrifices to Gd in prayer, thanksgiving, requests, and supplications (?).  Since the Rabbis had intuited that Adam instinctively knew how to pray as seen in Chapter 2; verse 5

“when no shrub of the field was yet on earth and no grasses of the field had yet sprouted, because the LORD God had not sent rain upon the earth”, (Gd had not yet answered man’s prayers for rain)

“and there was no man to till the soil,”– this is an illusion towards man’s need for prayer

that Abel had learned the need and the ability to pray from Adam. Cain had copied his efforts. Whereas Abel had focus and intent in his prayers, Cain lacked both necessary ingredients, to focus and his proper intent, in his “heartless” prayers. Cain was going through the motions. He might have even thought that Gd wouldn’t notice. Cain might have been distracted.

The Rabbis added on the focus had been on a woman as his cause for distraction. There was a tradition that Abel had a twin sister that Cain was interested in. Abel had denied Cain’s request to access her attentions and wow her. Cain wouldn’t hear of it, of Abel’s decision. He decided that he had wanted her and he would take her. Thus a fight broke out as Abel tried to defend his twin sister’s rights.

“and when they were in the field,”  – Cain took it out to his turf. This is where he felt most confident and secure. It gave him courage to fight his younger brother. He thought that he could overtake him and he did.

Cain set upon ( rose up against) – Did Cain have the courage to fight and kill his brother? Each interpretation offers a slight variation on what was going through Cain’s mind. “Set upon” suggests encircling or approaching Abel, to come close, perhaps offering that Cain had a few minutes to regret his decision to attack his brother. “Rose up against” states that Cain was quickly upon him. There was no going back. There is a sense that Cain overtook him and that Abel didn’t stand a chance.

“his brother Abel and killed him.”– The Torah wants us to know that Cain was his brother, that even a brother can attack to kill his brother. One wonders what was going through Cain’s mind? the word choice of “kill” is used in place of “murder”. “Murder” is defined as premeditated killing. Could that have been the story there? Possibly Cain did not intend on killing his brother, Abel. Possibly Cain regretted that it had come to that. Could it be that Cain underestimated how strong Abel was and how intently Abel fought back? Can we look back at the warning that Gd offered in  Chapter 4, verse 7. (See above). Gd knew that Cain was “annoyed”, from the previous verses. Since Cain had been created with free choice and free will, did Gd foresee that Cain would succumb to his “annoyance”? Perhaps Gd was teaching us another lesson, that we can’t give in to our annoyances.  Also, that we must think before we react and act on our emotions, especially annoyance.

A picture snapped by me, Rabbi Claire, as I was walking by a store front of sample Build a bears being posed, some spaced apart.  Some teddy bears are placed too close together. Annoyances might be brewing. (Perhaps, we can buy them to remind ourselves of what might happen when we get too close to one another. )

Then again, possibly Cain didn’t know what killing did to a person. Perhaps, he thought that he had injured his brother but not killed him.  I often wondered what Cain experienced once he realized that he had ended the life of his brother, Abel. Cain might have felt lost, alone, and confused, that killing would be so final.  He hid from Gd but what about his parents? How did Adam and Eve respond? Why doesn’t the Torah record their reactions? Why is the conversation solely between Gd and Cain? Since Gd initiated the “gentle”  conversation and appeared to offer Cain an opportunity to regret and repent, according to Rashi, Radak, and Sforno, Cain “blew it” so to speak. He passed up the opportunity to recover from this experience and grow from it. Cain was learning that there were consequences for his actions; some more harsh and severe than others.

“Then He said, “What have you done? Hark, your brother’s blood cries out to Me from the ground!

Therefore, you shall be more cursed than the ground, which opened its mouth to receive your brother’s blood from your hand.

If you till the soil, it shall no longer yield its strength to you. You shall become a ceaseless wanderer on earth.”

“Cain said to the LORD, “My punishment is too great to bear!

Since You have banished me this day from the soil, and I must avoid Your presence and become a restless wanderer on earth—anyone who meets me may kill me!”

Does Gd show remorse? Does Gd think that his punishment has been too severe?  Should have Gd taught Cain about killing before he killed Abel and why we don’t kill to resettle our negative feelings? Doesn’t Gd offer a way to protect Cain from future harm and retribution?

“The LORD said to him, “I promise, if anyone kills Cain, sevenfold vengeance shall be taken on him.” And the LORD put a mark on Cain, lest anyone who met him should kill him.

Cain left the presence of the LORD and settled in the land of Nod, east of Eden.”

The use of the name of Gd used here, is Hashem or the Gd of mercy, love,  and compassion. Possibly Gd felt that he had to tap into another side to Gd’s character, that of understanding with mercy and compassion, that man does sin, and that he might sin by killing, even if that hadn’t been his initial intent.

Perhaps Gd deliberately chose not to add Cain and Abel’s conversation. Perhaps Gd chose to teach us that it isn’t within the conversation, but it is the intensity of the negative emotions that present in the physicality of the interaction that is perceived by the two participants in this particular interaction.

Since Gd appointed man to subdue the Earth and serve as the guardians and the workers/tillers of the Earth, it is our job to step forward and do Gd’s bidding.

“God blessed them and God said to them, “Be fertile and increase, fill the earth and master it; and rule the fish of the sea, the birds of the sky, and all the living things that creep on earth.”

in addition to the following:  (Chapter two; Verse 15.)

“The LORD God took the man and placed him in the garden of Eden, to till it and tend it.”

Tending to all of our emotions is supra paramount. Take it from Teddy bears. They seem to have it right for now. They sit on the shelf and observe us.  They don’t seem to get involved in our affairs. They aren’t focused on subduing us. They are teddy bears. They offer hugs.

Perhaps, we need to reread and refocus our thoughts on Chapter two; verse 15.

We need to attend ourselves to tend the Lord’s Earth, which includes our thoughts (feelings as well), speech and actions.

May our tending and tilling be blessed by Hashem, our Gd. 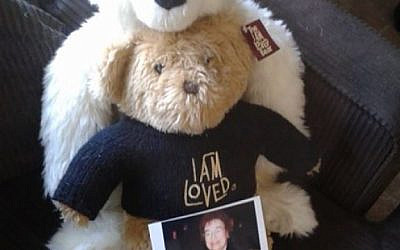 About the Author
Rabbi Claire conceived of the concept Bears from Bergenfield upon a routine check of the Israeli staff at camp SLC August of 2001. She realized that the world needed to wake up and become aware of the suffering the Israelis were enduring as the Palestinians continued their intifada against them. After 18 years and 195,000 teddy bears amassed and redistributed, Rabbi Claire is searching for more public platforms to proliferate and advance her message, that Jewish lives matter, especially with a teddy bear. Rabbi Claire lives in Bergen County with her husband of 38 years, Larry, and their 4 children, Sam, Shira, Seth, and Sarah Rose, plus their incoming son-in-law Ivan. For further information of how to get involved with this endearing project, contact her at lgcg98@aol.com.
Comments