The Sisters of Zion Convent in Jerusalem’s Old City is unique, being  both a pilgrimage destination and an archaeological site. It is on the route of the Via Dolorosa, the Way of Sorrows, between the 2nd and 3rd Stations of the Cross, just past the Ecce Homo Arch, where, according to the gospels, Pontius Pilate presented Jesus to the masses, saying “Here is the man.” But it is perhaps most famous for housing the Lithostrotos [“Stone Pavement”] referred to in the Gospel of John as the site of Jesus’ condemnation.

And indeed, for five shekels one can descend into the bowels of the building and see the Lithostrotos itself. Archaeology has revealed this to be a plaza built by the Emperor Hadrian a century after the events of the gospels, so what one is looking at is, at best, a rebuilt version of the pavement mentioned in the Book of John.

But the stone plaza is there, 1900 years old, complete with special carved striations to help the horses maintain traction, a system of reservoirs for storing water and an assorted wealth of archaeological finds.

My personal favorite is “The Kings Game:” an actual board game etched into the stones, on which the Roman soldiers played to pass the time in between guard shifts or patrol duty, tossing dice carved from sheep knuckles and moving tokens around a crown-shaped board. This game, known to historians as Basileus, has been found throughout the Roman Empire, wherever soldiers were fighting off boredom. Many Christian scholars have considered the irony of “The King’s Game” in the very place where, a century earlier, Roman soldiers had mocked Jesus, “King of the Jews,” crowning him with thorns, dressing him in royal purple and taunting him.

While this is a poignant parallel, it is not where my particular thoughts flow when I see the game. When I look at this 1,900-year-old parcheesi set, I think of the life of soldiers throughout history, invariably one of monotonous routine. The most combat-ready soldiers still spend a great deal of their time fighting off boredom. How much more so a group in this far-flung corner of the empire, taking turns guarding the gates of the fortress or patrolling the ramparts…but mostly waiting. The Roman soldiers, big terrifying galoots in the eyes of the local Judean populace, were just bored kids like all other soldiers, trying to pass the time with a game of chance.

I was also a soldier 35 years ago, neither a terrifying galoot nor a kid, but quite often bored. I remember one six-month stint, guarding a forlorn hilltop outpost, where it was very unlikely that anything would happen. In the radio room we played bridge. Alone, on top of the water tower, when I should have been scouring the landscape for hostile actors, I worked diligently on the New York Times Sunday crossword puzzle.

My older brother was stationed on the Egyptian side of the Suez Canal after the Yom Kippur War and remembers a great deal of backgammon.  My father served in France during World War II, but when his platoon was stranded for months in an apple orchard, waiting for orders from HQ, he taught his commanding officer how to play chess. And in Belvoir, the Crusader Fortress in the Beit Shean Valley where 800 years ago the Crusaders made their last stand against Saladin, archaeologists found board games etched onto the undersides of pots and pans. The soldiers on kitchen duty, officially forbidden from playing games of chance, had found a clever way to keep their gaming a secret.

In art and literature, references to Rome and Jerusalem conjure dramatic moments from “I Claudius” or “Ben Hur”, but it is the bored dice-throwing soldiers that pique my curiosity. They are an example of something that has been part of human culture since the beginning: Homo sapiens don’t like sitting around doing nothing. We have minds that are hungry for mental activity, even if it’s just rolling dice and pushing a token along toward a goal. And being told to keep watch for something that will likely never come is one of the hardest tasks one can ask of the human brain.

Our human minds also tend to ponder the long view of our past and future. It is why romantic pilgrims come to Jerusalem to remember that Galilean rabbi who was taunted by Roman soldiers and simultaneously contemplate their redemption. It is why I look at the King’s Game and think of thousands of years of bored soldiers shooting dice made from sheep knuckles and solving crosswords. It’s always been in our nature to wonder what comes next and reminisce about what came before. It’s the expanded version of a game of chance or strategy. 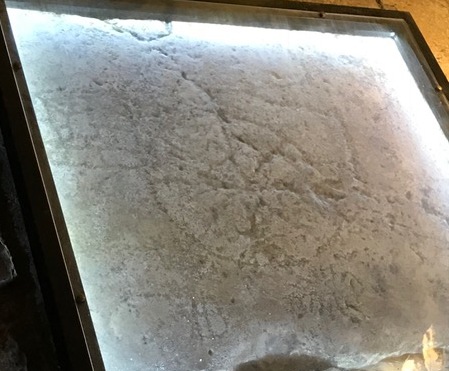 The King’s Game (photo: Mike Trapani)
About the Author
Bill Slott is a licensed Israeli tour guide who has hiked and biked the length and breadth of the country. Bill is a member of Kibbutz Ketura, where he has lived since 1981 with his wife and three daughters.
Related Topics
Related Posts
Comments