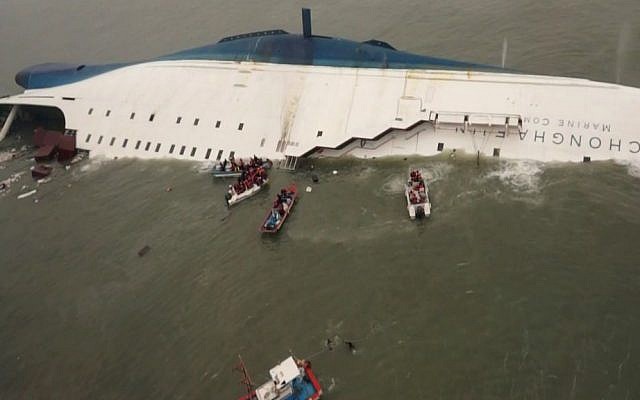 Guilt is one of those traits at which we Jews supposedly excel. Yet, just what is unique about Jewish guilt? And what can Jewish sources tell us about managing its burden?

I got to thinking about this in light of the tragedy last week of Kang Min-gyu. Kang lead the high-school field trip aboard the ill-fated vessel, the Sewol, when it capsized and sank last Wednesday morning off South Korea’s southern coast. Some 300 people are feared dead. Nearly all were students of his. Shortly after his rescue, Kang learned of the extent of the tragedy. Declining an offer to return home, he instead headed to the gymnasium in the south of the country where hundreds of anguished parents awaited word of the fate of their children. According to reports in the Korean press he was last seen on Thursday together with ten other school staff members as they fell to their knees begging the forgiveness of the anguished parents, as their overtures were rebuffed.

On Friday morning Kang’s body was found hanging from his own belt on a tree a short distance from the gymnasium. The police found a suicide note in his wallet: “I can’t live on without knowing whether my students are alive or not. Please let me take all the responsibility as I pressed ahead with the field trip. Burn my body and scatter it on the site of the sinking.” Kang had been rescued from the chilly waters of the Yellow Sea, only to be swept away in a tsunami of guilt. More than just a suicide, his death was an offering; a sacrifice of expiation, in which he left his body to the stricken parents, and his ashes to his beloved students.

None of us can imagine the crushing burden he faced. But Kang’s suicide teaches some important lessons about guilt. Consider the individuals whose responsibility for the disaster far outstripped Kang’s own. Kang merely took the innocent step of booking tickets for his school on this particular voyage. By contrast, the ship’s third mate was at the helm and mishandled the vessel causing it to capsize. The communications officer instructed everyone to remain in sealed quarters below deck, and would later claim “I didn’t have time to look at the manual for evacuation.” Finally, there was the ship’s captain, photographed as one of the first to flee the ship, apparently without so much as getting his feet wet. All of these individuals, like Kang, no doubt boarded the ship with a sense of responsibility for the welfare of its passengers. Yet Kang alone was stricken with guilt of suicidal proportions. Guilt is actually a misplaced expression of our close feelings for the victim, rather than a sober assessment of fault. When we experience guilt we so easily confuse connection for culpability.

Talmudic law understood this point well. If an individual comes before the rabbinic court and confesses to having committed a capital crime, their testimony is rejected out of hand. The reason, says the Talmud is ein adam mesim atzmo rasha – a person is never permitted to render a guilty judgment against himself. The Talmud doesn’t explain its rationale against “turning one’s self in”, but Maimonides does. We fear that the individual may unduly judge himself worthy of death, and seeks to effectively commit suicide with the court’s assistance (Hil. Sanhedrin 18:6). We are the most disqualified arbiters of our own culpability.

Jewish sources address the entire gamut of complex human emotions: fear, pride, anger, jealousy, loneliness, suspicion, and more. Strikingly, there is no word either in biblical or rabbinic Hebrew for the emotional state of a guilty conscience. Modern Hebrew ashmah is never used in this way in earlier literature. Equally striking is the fact that across the entire breadth of biblical and Talmudic literature, we find not a single tale of an individual who suffers guilt—who cannot let himself off the hook because of past behavior. Moreover, nowhere in the entire tradition do we read of individuals who achieve expiation by inflicting punishment on themselves.

Instead, legion in Jewish sources are individuals who express remorse for past errors, but are eager to find a constructive way to move on. Our daily prayers include the penitential psalm, Psalm 6, in which the author cries out:

O Lord, do not punish me in anger, do not chastise me in fury…heal me, O Lord… Deliver me as benefits Your faithfulness, for there is no praise of You among the dead, in the underworld, who can acclaim You?

In these sources, remorseful individuals seek legitimation from a source outside of themselves—the Almighty–for the right to return to society, grow from their experiences and again make a positive contribution.

Few of us will ever have to bear the burden of Kang Min-gyu. But often we, too, are guilt-stricken, especially after the death of a loved one. Did I manage her care properly? Did I owe her more in her lifetime than I gave? Here there should be no “Jewish guilt,” only Jewish responsibility. Jewish responsibility means having the capacity to distinguish between our deep connection to someone, and our relatively minor culpability for their demise. It mandates us to take our heartfelt reflections on past actions and to marshal them toward constructive ends. It means that we are the least qualified to render judgment, let alone punishment upon ourselves. It means that we have to leave the question of our culpability to the objective court of the heavenly tribunal, which, our sources teach, is surprisingly more lenient with us than we often are with ourselves.

About the Author
Joshua Berman is a professor of Bible at Bar-Ilan University and is the author most recently of Ani Maamin: Biblical Criticism, Historical Truth and the Thirteen Principles of Faith (Maggid).
Comments