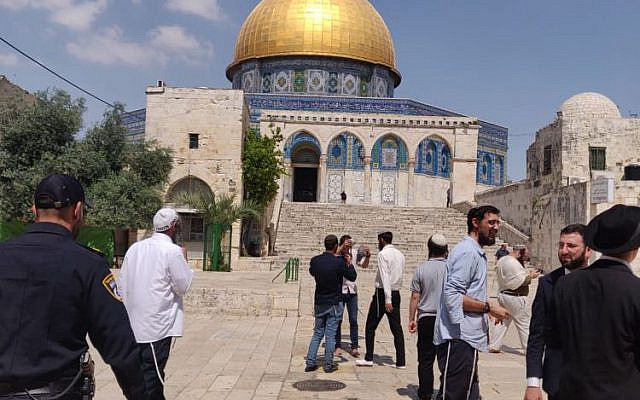 In Parshat Re’eh we are told not to worship idols and when we worship God it has to be in “The Place” that God selects as we see in Dvarim 12:5-7:

Where is “The Place”?

Chizkuni points out that the name of “The Place” was not listed since the Shechina, Divine Presence rested in a few places such as Gilgal, Shilo, Nov, Givon and finally “Beit Olamim”, the eternal home, the Temple Mount.

The Kotel, the Western Wall, which was a retaining wall is not listed there as it is not “The Place.”

Immediately after Tisha B’Av, Lapid said that “Jews have visitation rights at the Temple Mount and that Muslims have freedom to worship at the site. A Jew who wants to pray can do so at the Western Wall, the holiest place for the Jews.”

Former Prime Minister Benjamin Netanyahu made a similar statement eight years ago on August 4, 2013, when the Barcelona soccer players visited Israel: “You just visited the holiest site for the Jewish people, the Western Wall.”

If you log on to the website “Tourist Israel” the first words that you will find are: “The Western Wall or the ‘Wailing Wall,’ is the most religious site in the world for the Jewish people.”

The Ministry of Foreign Affairs website did get it right and does not try to hide anything. Their site says straight out: “The Temple Mount in Jerusalem, where the two Jewish Temples were located, is the holiest site in Judaism. Called Haram Al Sharif (the Noble Sanctuary) by Muslims, the site contains the al-Aqsa Mosque, which is considered the third holiest site in Islam, the iconic Dome of the Rock and many other small structures.”

The site continues: “After Jerusalem’s reunification in 1967, Israel chose to uphold the existing status quo on the Temple Mount. Out of respect for Muslim sensibilities, it allowed the Islamic Waqf to continue to administer the Temple Mount, the holiest site in Judaism. Non-Muslims (Israelis and tourists) are allowed to visit the Temple Mount at fixed times but do not enter the Al-Aqsa Mosque itself. They visit other parts of the site and usually walk around the large open spaces. In addition, Jews and other non-Muslims are not permitted to pray on the Temple Mount.”

On the one hand, the Ministry of Foreign Affairs is saying that the Temple Mount is our holiest site yet on the other hand, out of respect for Muslim sensibilitiesת Jews are not permitted to pray there.

Why are so many people, including our leaders, getting it wrong?

In order to deflect the Jews from wanting to pray on the Temple Mount, in 1967 the Kotel was built up into a holy site and tourist attraction. However, for our leaders to say that the Kotel is our holiest site is deception by those who know better but prefer to try to avoid conflict.