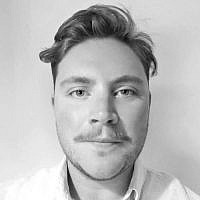 The Blogs
Ilan Selby
Apply for a Blog
Advertisement
Please note that the posts on The Blogs are contributed by third parties. The opinions, facts and any media content in them are presented solely by the authors, and neither The Times of Israel nor its partners assume any responsibility for them. Please contact us in case of abuse. In case of abuse,
Report this post.

Over three months after the apparent end of Corbynism, and roughly ten weeks into the resultant Labour leadership race, the UK’s Jewish community continues to face uncertainty and be fearful over the direction that the Labour party will take. As it stands, there are three candidates remaining, vying to replace Jeremy Corbyn as leader of the Labour party: Rebecca Long Bailey, Lisa Nandy and Sir Keir Starmer. In under two weeks, on April 4th, the next leader of the party will be announced – but what does each candidate mean for the future of the Jewish community in the United Kingdom?

Nominated by the likes of John McDonnell, Diane Abbott, Richard Burgon and Lloyd Russell-Moyle, Ms. Long-Bailey represents the clear option of continuity from the current leadership. Throughout her campaign, she has been asked numerous times about her views of the current Labour leader, and has been given countless opportunities to criticise the leadership and direction that the party has taken under Corbyn. However, time and time again she has defended him. Describing Mr. Corbyn as an “honest, decent and principled man”, Long-Bailey began her campaign by giving him “ten out of ten” for his leadership and has since spoken about asking him to join her shadow cabinet, if she is successful in her bid to replace him.

Concerning her record (or lack thereof) of seeking to combat the institutionalised nature of antisemitism within Labour, Ms. Long-Bailey was appointed by Jeremy Corbyn to Labour’s National Executive Committee (NEC) – the governing body of Labour, which is tasked with setting the party’s overall strategic direction. The NEC – a body which has been heavily criticised for its failure to deal with the complaints, reporting, suspension and expulsion procedures relating to antisemitism within Labour – was the body that initially sought to redefine antisemitism for Jewish people. In this effort, the NEC forewent four central elements of the internationally-recognised IHRA working definition of antisemitism, concerning views and behaviour towards Israel. Long-Bailey, as a member of the NEC, was involved in the meeting in July 2018 where this decision was made, and has since claimed that she “can’t remember” whether or not she spoke in support of the adoption of the IHRA definition of antisemitism in full.

This interplay between antisemitism and criticism of Israel has been a central feature in Labour’s failure to deal with antisemitism within the party. As such, this issue has become a popular topic of questioning in the current leadership race. For instance, at a leadership hustings event, participants were asked directly if they were a “Zionist”. Long-Bailey’s response was to say she was a Zionist, qualifying this statement by saying if that meant agreeing to “Israel’s right to exist and right to self-determine.”. Whilst such a question and answer may achieve the necessary simplicity for a good headline, without further explanation from Ms. Long-Bailey such a statement becomes redundant, given the disparity between her rhetoric and past actions.

Framing herself as the differential candidate, offering an alternative path for the Labour party, Lisa Nandy has declared herself as “the brave choice” in the leadership race, stating that Labour has been getting it wrong for fifteen years, and if it is to continue on this path, the party “will die”. Having been Shadow Secretary of State for Energy and Climate Change under Jeremy Corbyn from 2015 to 2016, Nandy resigned as one of twenty shadow cabinet ministers in June 2016, in opposition to the direction that Corbyn was leading the party. In February, Ms. Nandy won the backing of the majority (50.9%) of the Jewish Labour Movement (JLM) – the mainstream Jewish organisation affiliated to the UK Labour party, an organisation which last year refused to back the party in the general election, given the institutionalised antisemitism within it.

Yet, to say that Lisa Nandy would be the “perfect candidate” to lead Labour out of its endemic problem with antisemitism, would be a stretch. In September 2019, on BBC programme, Politics Live, when challenged by Tory MP, Sir Charles Walker, on Corbyn’s “problem” with Jewish people, Lisa Nandy replied by saying that “tribal loyalties” will always be a part of politics. With such an ambiguous comment, it was unclear whether this was in reference to the loyalties of the political parties themselves or indeed the loyalties of the Jewish community. Yet, even if we were to give Ms. Nandy the benefit of the doubt in this instance, such a weak response to the serious question raised about the Labour leadership’s inaction on antisemitism within the party is indicative of the widespread indifference towards antisemitism, which continues to be commonplace among Labour MPs today.

Furthermore, Lisa Nandy has repeatedly backed the Palestine Solidarity Campaign (PSC), an organisation which openly supports the Boycott, Divestment, Sanctions (BDS) Movement and an organisation which in January 2020 enabled BDS co-founder Omar Barghouti to speak in the UK at its Annual General Meeting. In February, Ms. Nandy was accused of “playing both sides” by Stephane Savary, a national vice chair of the JLM. Despite describing herself as a Zionist, Nandy’s affiliation with the PSC and her endorsement of the Palestinian right of return, a principle that would end Israel’s Jewish character, brings into question her understanding of the term “Zionism” itself, through advocating for such a perceived incompatibility.

Starmer is the current frontrunner and clear favourite to replace Mr. Corbyn as Labour leader. Throughout the leadership campaign, Keir Starmer has repeatedly been accused of being rather non-committal on a number of issues. For example, he has refused to criticise Corbyn’s leadership of the party and has continued to support Labour’s position on Brexit during the election campaign, in spite of the widespread criticism that this stance received from Remainers and Brexiteers alike. The truth is that Mr. Starmer is the only candidate of the three able to win votes from across the party’s political spectrum, from both the hard left of the party and the more centrist party members too. It is clear politicking and calculation from Starmer, who in 2016 sought to remove Corbyn from a position of leadership, saying it is “simply untenable to suggest that we can offer an effective opposition without a change of leader”. Frankly, the Labour leader candidate does not want to upset any significant group within the Labour party and, so far, this tactic seems to have been quite successful for him.

It is certainly worrying that Sir Keir Starmer, having been a member of the shadow cabinet for three and a half years under Jeremy Corbyn, has only decided to speak out against Labour’s problem with antisemitism following the party’s catastrophic December 2019 election defeat. Perhaps this serves as another example of Starmer’s predilection for political opportunism. His inaction on the issue, when in a prominent position on the Labour frontbench, suggests an indifference to this particular form of racism, which must be a concern for the Jewish community in the UK.

It should be mentioned that Starmer was the second choice for the JLM, marginally behind Lisa Nandy, as he received 45.3% of the vote at the recent JLM leadership ballot. At the Jewish Labour Movement hustings, when asked whether he was a Zionist or not, Starmer said that he would not use the label of “Zionist” to describe himself, continuing that, despite this, he understands, sympathises and supports Zionism. Starmer’s route to Labour leader necessitates that he secures a significant backing from the hard left/pro-Corbyn portion of the party membership, and so his inability to describe himself as a Zionist is, at least in part, based on not wanting to alienate this section of the electorate. Nevertheless, Starmer’s tendency to favour reactive politics is not what is needed to stamp out the antisemitic hate that has characterised the Labour party in recent years. Strong, proactive leadership, and an ability to mobilise party members from indifference to action, in combating antisemitism, is what would help pave the path towards reconciliation between Labour and the Jewish Community in Britain.

Unfortunately, there is no outstanding candidate with a robust history of challenging the Labour party and its processes on its shocking antisemitism record. Rebecca Long-Bailey who received a backing of a mere 1.4% of JLM voters, and who is backed by Corbyn’s closest allies, would simply re-brand Corbynism as Labour leader. Ideologically, she is the most aligned to the current leader and it is frankly very difficult to envisage that a Labour party led by Rebecca Long-Bailey, would significantly alter its amicable relationship with antisemitism.

Lisa Nandy and Sir Keir Starmer were the clear favourites among JLM members to become the next party leader, receiving over 96% of the vote between them. Both Nandy and Starmer have stated that correcting Labour’s antisemitism issue would be a top priority for them as Labour leader. However, such rhetoric just seems to be “the right thing to say” rather than what is genuinely believed by the candidates. The ample opportunities, as shadow cabinet ministers and prominent Labour figures, to speak out against Labour’s antisemitism record, in solidarity with the Jewish community, were ignored – and it was this inaction and indifference from Labour MPs which added to the collective anxiety of the community.

Ultimately, all three candidates campaigned to elect Jeremy Corbyn as Prime Minister of the UK in December, when 87% of British Jews believed him to be antisemitic. This fact, I do not believe can be overstated, as it points to the clear apathy and indifference among all three candidates towards antisemitism. Not one of the candidates forcefully spoke out against Labour’s endemic antisemitism issue, at a time when 47% of British Jews would have “seriously considered” leaving the country if Corbyn was to become Prime Minister. Such inaction will not be forgotten without serious action being taken towards combating antisemitism within the Labour party.

What is clear, is that the legacy of Corbynism will live on in the Labour Party, regardless of who wins the leadership election. Labour party membership surged under Corbyn, and the political and ideological make-up of the party’s membership, now has a hugely significant “Corbynista” presence. Yes, it is true that the route towards repairing the relationship between Labour and the Jewish community will certainly differ from candidate to candidate, but there is no quick fix to eradicating the party of the antisemitism that has plagued it over the last four to five years.

As mentioned, the interplay between antisemitism and Israel is a central feature of Labour’s antisemitism crisis, and so it is important that, as British Jews, we engage in conversation on what “Zionism” means. The current candidates have shown a clear lack of knowledge and understanding when it comes to the term and this is, undoubtedly, representative of the wider population of the UK. As Jews, we have a responsibility to define “Zionism” and eradicate its associated stigma. We must educate politicians and society, so that they are able to identify antisemitism. Education can help de-mystify the term “Zionism” and push the Labour party, and the wider British population, away from indifference on antisemitism. In demystifying the term, we can clarify exactly where the boundaries for criticism of Israel lie, and where such criticism mutates into antisemitism.

About the Author
Based in Brussels, Belgium, Ilan Selby is both the current Policy Officer at the European Union of Jewish Students and the European Affairs Officer at B'nai B'rith International. He is a double graduate from the University of St. Andrews in International Relations MA (Hons) and from King's College London in Conflict Resolution in Divided Societies MA.
Related Topics
Related Posts
Ilan Selby
Comments