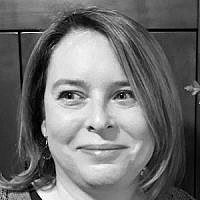 The Blogs
Wendy Halloun
Apply for a Blog
Advertisement
Please note that the posts on The Blogs are contributed by third parties. The opinions, facts and any media content in them are presented solely by the authors, and neither The Times of Israel nor its partners assume any responsibility for them. Please contact us in case of abuse. In case of abuse,
Report this post.

Passover celebrates the redemption of a nation of slaves. In an event unprecedented in history, God intervened through miraculous signs to break the strongholds of slavery in Egypt and set his people free. Each of the plagues inflicted on the Egyptians exposed the impotence of the idols that the Egyptians called gods[i].  Yet this deliverance was not without a cost. Each family took a lamb into their homes for four days and then killed it. They placed some of the blood on the doorposts and crossbeams of the house and then stayed inside throughout the night.

The blood will be a sign for you on the houses where you are, and when I see the blood, I will pass over you. No destructive plague will touch you when I strike Egypt.

That night the angel of death passed through Egypt and struck down every firstborn male from the poorest peasant to the son of Pharaoh. The only distinction between the houses of the children of Israel and that of the Egyptians was the lamb’s blood on the door frames. The sacrifice of a lamb was the means of redemption for each family and enabled their journey to freedom.  Even as the Egyptians were still mourning their sons, the children of Israel set out for the promised land.

This powerful story of the foundation of a nation is retold each spring when Jewish families gather around the table to celebrate the Passover Seder. For Messianic believers there is a special significance in each part. Almost 2000 years ago, Yeshua gathered with his disciples in Jerusalem to celebrate one final Passover Seder together. He knew that he would soon be offering his life as the ultimate Passover lamb and chose this meal to share the covenant symbols of bread and wine with his followers. These symbols remind us of his sacrifice while we watch for his return.

This Friday, the night of the Passover Seder falls on the evening of Good Friday: the day when Christians throughout the world remember the sacrifice that Yeshua made on the cross. He became the perfect Passover lamb offered to redeem not just one nation of slaves, but an entire world sold into slavery to the kingdom of darkness.

For you know that it was not with perishable things such as silver or gold that you were redeemed from the empty way of life handed down to you from your ancestors, but with the precious blood of Christ, a lamb without blemish or defect. He was chosen before the creation of the world, but was revealed in these last times for your sake.

Spiritual slavery is harder to recognise than physical slavery. When the children of Israel were slaves in Egypt, Pharaoh controlled their time and resources; they had limited freedom of choice. Similarly, each of us, while under the control of the kingdom of darkness, has limited freedom of choice but we are not aware of it. We make decisions for ourselves using our intellect, emotions and will power. Where there is a fork in the road, we choose left or right according to the circumstances around us and we believe that we are truly independent. But what if there were actually four paths ahead of us yet we had only been able to see two of them? Two of the paths were hidden by the darkness limiting our choices without us even realising it. Like Pharaoh, the prince of this world rules by limiting choices but unlike Pharaoh, he prefers to let us believe that he does not exist. He rules by deceit, by planting lies in our minds which we become so accustomed to that we consider them rules for living.

Spiritual slavery means we prefer routines and ritual over relationship. We set limits to what God can do. We try to keep our lives under control. We choose to use soul power rather than being led by the Holy Spirit guiding us in our spirits. Learning to walk by the spirit is messy. Like a child learning to walk, we often fall down. We make mistakes which become lessons to guide us. We need to be in constant conversation with the Holy Spirit so that our eyes can be open to what God is doing all around us. Often this means putting our plans aside and taking the time to connect with someone and pass on the blessings of the kingdom of God: listening to others, praying for healing and setting the captives free.

Our freedom was purchased for us at immeasurable cost. God our Father sent his only son to take our place as a sacrificial lamb; “the lamb slain from the foundation of the world” Revelation 13:8. Yeshua’s blood on the doorposts sets us forever free from spiritual slavery. As the children of Israel followed the pillar of cloud through the wilderness, we also need to follow the Spirit of God throughout our lives here so that our eyes are open to the fullness of God’s plans for us.

It is for freedom that Christ has set us free. Stand firm, then, and do not let yourselves be burdened again by a yoke of slavery.
Galatians 5:1

I want to encourage you in your journey to freedom. From Passover until Pentecost, I am sharing short daily devotions on Facebook, Pinterest and email. These devotions are based on the journey of the Israelites in the book of Exodus after the parting of the Red Sea. I would love to have you join us.

About the Author
Wendy Halloun lives on Mount Carmel. Her book, Identity in Messiah is available from Amazon.com. Find out more on wordsofclay.com
Related Topics
Related Posts
Wendy Halloun
Comments