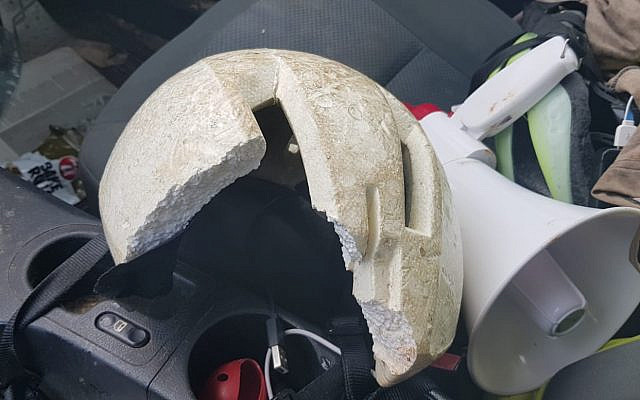 My shattered helmut after a settler struck my head with a massive staff. (courtesy)

Stunning honesty. In one of my live videos from last week, a settler actually says (in Hebrew) that The Land of Israel is holier than a non Jewish human being (He uses the usually derogatory term “goy.”) The very week that  our Torat portion included the story of the golden calf (Ki Tisa), this settler confirmed out loud what I have always maintained is the idolatry of our time. We are arguing whether or not it is permissible for the settler’s real, live cows to eat (steal) the barley that Bedouin have planted for their flocks. When I ask him whether a non Jew is created in God’s Image, he clarifies that I mean a “goy,” but quickly says “yes.” I then ask him what is more holy, the Land of Israel or the non Jew.” He pauses and ponders for a moment, and then answers, “The Land of Israel” because it is God’s Gift to the Jewish people. That is of course why he doesn’t even see the theft of what non Jews have planted as theft.

I don’t know many people today who worship golden calves. There are those who worship gold and power, but that is almost passe.  Today we turn good and holy things into idolatry. Flags and national anthems move me, and that is why I know they can be dangerous.  While it is customary in the US and Canada to place an Israeli flag and a US or Canadian flag on either side of the Ark with the Torah scrolls, I forbade it when I was a congregational rabbi. In our Sanctuary, we must worship only God.

All of this I have written many times.  However, last week the multiple blows I continued to receive from settlers in the name of the Land of Israel finally helped me answer an additional question.  Why does the omnipotent God of the entire universe get so hot under the collar about idolatry. Why so jealous? Does the Almighty feel threatened?

The fact is, that evil happens when even something as holy as the Land of Israel blinds us to God’s Image in every human being. Believing that the Land is more holy than the human being “justifies” dispossession, expulsion and violence. Most of this evil is directed against non Jews, but see what happened to my helmet after a settler attacked me with his massive staff last week. Because we can also turn “peoplehood” into idolatry, we sometimes don’t want to admit this out loud because “what will the goyim think?”

In last week’s Torah portion, God grants us a second chance, and we receive the Ten Commandments anew. If we don’t bear false witness in order to steal what we covet, we can again observe the first Commandment, “I am Adonai, your God.”