This is an exciting time of year as students in high schools and colleges graduate, celebrating the completion of one block of learning and looking forward to the next stage in their lives.

Every graduation is really a beginning, and that is certainly true when it comes to a siyum. In the Jewish tradition, when one completes a unit of Jewish study, one holds a siyum, a celebration of that completion and a promise of future study. The organization, Dirshu, will be holding a large siyum in Brooklyn, NY on June 20 with Jews from all over to celebrate five and a half years of its Kinyan Halach Program, which teaches thousands of Jews worldwide the intricacies of Jewish law.

This international religious organization, which is the largest Torah organization in the world, uses Jewish education as a means of combatting the social and moral decay seen in mainstream culture. For some who feel insecure in their lives, Dirshu gives them a sense of purpose by helping them to become closer to their religion, to their community and to God. More than 150,000 people worldwide study the code of Jewish law with Dirshu. These people have found a new sense of belonging. Some participating Jews have had limited education in the past and have gone through tough times, yet Dirshu is there for them each step of the way, supporting them in their studies as well as in their personal lives. Dirshu’s participants have seen marked improvements in their social and mental health.

For many people, as they grow older, they begin look for more meaning in their lives. That is where Dirshu comes in. Dirshu helps its participants connect to their heritage and feel that sense of community through study, rather than turning to unhealthy coping mechanisms. It is a well-known fact that when someone feels a strong sense of community, they are more likely to behave in a manner that supports that community. That is why Dirshu pursues this mission.

Studying Torah improves the learner’s life, which leads to a better community, which ultimately leads to a better world. Each participant finds a new outlet for their energies and serves as a role model for others. And Dirshu does not just stay within one Jewish community. It engages Jews across all boundaries, regardless of location, ethnicity, level of observance, past Jewish learning or money. Dirshu enjoys a broad buy-in from Jews from all corners who are able to attend lectures and take tests on the learned material in major Jewish communities worldwide. There is no other organization like Dirshu that brings such a diverse group of Jewish people together for the one common goal of Jewish education.

One of the reasons Dirshu is so successful in bringing in Jews from varied backgrounds is that it does not preach a political agenda, nor does it attempt to sway Jews from one community to another. The goal is merely to help its participants live better and more meaningful lives through Torah study, which will ultimately lead to a stronger community and a stronger world.

At a time when many in the world are becoming more secular and less spiritual, Dirshu has engaged thousands of individuals who have learned to embrace their culture. Thousands of men of all ages from various Jewish sects and denominations commit to this in-depth level of Jewish study where they are all given the same tests when they master certain areas of study. A feeling of accomplishment can go a long way in boosting self-esteem and letting someone know that they can have a positive effect in other areas of their lives.

Such programs better every aspect of a participant’s life, including their larger community. When the people within a community are happy, healthy and knowledgeable, it increases those traits in the community as a whole.

So here is to the end of one phase and the anticipated beginning of another. 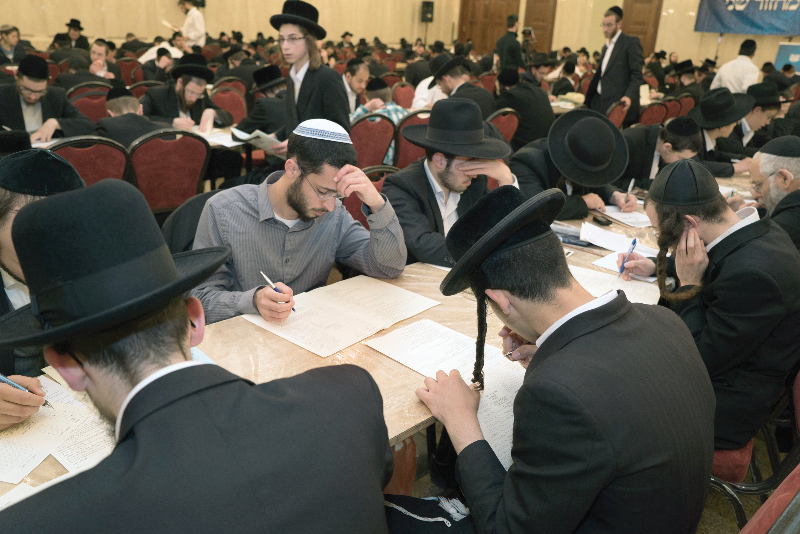 Dirshu members taking the Daf Hayomi B’Halacha test in the Belz Hall. (Dirshu)
About the Author
Zachary Silver is a committed pro-Israel activist from West Hartford, Connecticut. A graduate of Brandeis University, Silver is the founder of Brandeis' Tamid Israel Investment club chapter. He is involved in various communal engagements seeking to promote the State of Israel.
Comments