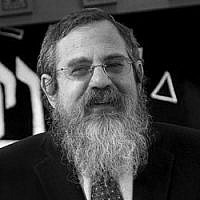 The Jewish world is in a tizzy about Seth McFarlane’s comedy routine at the Oscars. His jokes about Jews running Hollywood touched a raw chord. Facebook posts are buzzing, and email blasts are being sent lamenting the stereotyping of Jews and their supposed power. The Oscars were not on my agenda, nor did they intrigue me, I was busy celebrating Purim. The brouhaha afterwards caught my attention, it raises some interesting questions.

When non-Jews stereotype Jews we get nervous. However, when Jews stereotype other Jews, in particular religious ones, the Jewish organizational world is totally silent. Two weeks before the Oscars, the popular police drama Blue Bloods ventured into Brooklyn in an episode “Men in Black.” The story centered on murder and infidelity in the family of a Hassidic Rebbe.

Hassidim are, as the title says, “Men in Black”, reclusive, insular, hostile. While there were nice points in the show, Hassidic Jews are stereotyped in a very negative light. Apparently the writers are Jewish: with names like Ish Goldstein and Ian Biederman, they seem to be members of the tribe. One has to imagine that they have some religious cousins in B’nai Brak. The script is their way of saying “those guys are just is too religious.” We have a strange double standard. When Jews denigrate other Jews because they are religious — its acceptable, however when a comedian makes a joke, which has a factual basis to it, oy vey watch out, the alphabet soup of Jewish organizations come gunning for you.

It’s not just TV drama, subjective messaging in entertainment promotes a simplistic view of Judaism. Fiddler on the Roof, the quaint, nostalgic story of Jews in the village of Europe tells us why Tevye observes Judaism. It’s not due to its philosophy, its spiritual significance, history or its intellectual depth. “Its Tradition, Tradition!” Tevye has disposed of three thousand years of scholarship, intellectual inquiry and spiritual struggle. Instead it’s a mind numbing assertion that we do this just because our grandparents did. Shalom Aleichem the Yiddish writer, who rejected traditional observance was the inspiration for the modern musical and movie. His deleterious feelings about the Judaism he spurned continue to trickle down as a message in the modern movie and play.

It’s also pundits. In a TV debate a few weeks ago, noted journalist Jeffrey Goldberg quipped that he has the same apprehension about religious Jews in control of Israel’s’ (alleged) nuclear arsenal, as he does the mullahs of Iran. Goldberg’s statement reveals a dangerous bias, implying there is a moral equivalency between rabbis of the Israel religious parties and the Islamic fundamentalists that lead Iran. It’s understandable that as a liberal Jew Goldberg disagrees with orthodoxy’s broad influence in Israeli society. But it’s a long leap to assert that they share the values of the Mullahs. Are the Orthodox Knesset members engaged in terror, have they threatened anyone with genocide? When Mel Gibson utters anti-Semitic remarks to policeman in Malibu, the world erupts. All we have is silence when a distinguished Jewish writer compares Torah scholars to those whose goal is Jewish genocide on national TV.

There are occasional rays of a more respectful reflection of reality. Last year Katmandu, was a hit drama on Israeli TV. It portrayed the lives of a young Chabad couple dispatched to remote Nepal to establish an outpost of Judaism.

The show revealed the inner struggles of Chabad Shluchim dealing with a foreign country, secular Israelis and challenges of living as a religious family in Nepal. In one touching scene, the young rabbi, Shmulik, brings his wife a cow as a gift, so she can have kosher milk for her coffee, a story based on an actual incident. The rabbi and rebbetzen are portrayed as real people, mostly free of the classic stereotypes prevalent in Hollywood and much of the Israeli media.

The greatest tragedy is that the Hollywood depictions of Jews and their beliefs are accepted as normative by both the broader society and many Jews who have little personal exposure to tradition.

Major Jewish groups that are deeply concerned about Jewish stereotyping need to begin to look inwards at those who are Jewish, but promote their own prejudice in entertainment and the media. The Hassidim of Williamsburg may be far removed from the Jewish groups in the high rises of Manhattan, still they both share the same heritage and history. When Jewish writers and producers stereotype Jewish practice and belief, the transmission of the beauty of these traditions to the next generation is threatened and society gets a distorted image of Jewish values. We live in a time when many Jews have little Jewish education; their understanding of Judaism is from the popular culture. At the very least we need to insure that what is said in the name of Judaism is an accurate reflection of those beliefs and traditions.