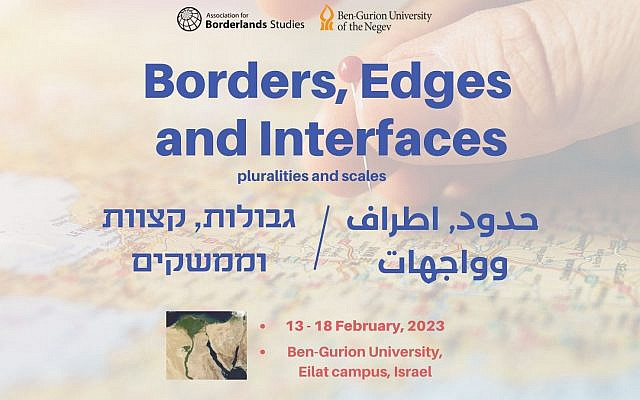 With the formal registration period now closed, we look forward to welcoming some 250 border scholars and practitioners from around the world for next February’s World Convention of Border Scholars to be held in Israel, hosted by the Geopolitics Research Chair and the Dept of Politics and Government of Ben-Gurion University (to be held at the Eilat Campus at the meeting place of three international borders — Israel-Jordan-Egypt, and not far from a fourth – Saudi Arabia).. In addition to the three days of intensive meetings and seminars and sharing of experiences from almost every border location throughout the world – North America, Africa, Asia, South America, Europe and the Middle East – the participants will also undertake professional field trips on and around Israel’s diverse borders with Egypt, Jordan, Syria, Lebanon, the West Bank and Jerusalem – and some discussion of maritime boundary issues which have become so relevant for Israel in the wake of the offshore agreement with Lebanon and the commercial exploitation of the underwater natural gas reserves.

This together with daily border experiences allows me to reflect for some moments on the importance of borders in all of our lives.

Along with interesting pre-conference meetings relating to local borders (Middle East) and Geopolitics taking place this week in Jerusalem and early next week in Tel Aviv, it doesnt leave much time for other activities. But it does allow for much pondering about the role of borders and boundaries in our lives. Not just the physical ones, the fences, walls and security guards, but also the perceptual, the cultural, the ethnic and religious, and the economic borders which, whether we like to admit it or not, constrain all of us into boxes and compartments which we are not always able to cross with ease – if indeed we want to cross them to what awaits us on the “other” side.

For some, freedom is the ability to cross borders and be part of a multi cultural world. For others, it is precisely the opposite, the ability to prevent others from entering into our space and society and remaining as homogeneous as possible.

Going to the local West Bank border crossing at Metar at 5 in the morning to pick up Mohammed who, over almost thirty years has not just become a worker on my house but a good friend, and someone I can trust with the keys of my house even when we are away (more than likely in London watching Tottenham lose yet again – life’s ultimate frustration – or researching Anglo Jewish history – life’s professional and nostalgic escapism), or to watch out for my kids when they were small, is the most vibrant and live border experience of all – as thousands of workers cross into Israel on a daily basis to work within the Israeli economy. They must have permits, they are not allowed to bring their cars or their own work tools, while the fence has gradually, over the past five years, become replaced by more and more of the ugly wall which separates and is a border (not just a questionable security barrier) to all practical effects – discriminating between those who can cross freely and those who cannot (I can cross freely in both directions just by being who I am and saying a friendly Boker Tov (Good Morning) to the security personnel – I’m not particularly proud of it but it is a reality). I would like to bring him and his work team to do some work for me in both Jerusalem and Netanya as well, but they do not feel comfortable going beyond what even they see as their comfort zone. They are interested in making a living, bringing up their families and shy away from local politics, be it the PA or Hamas. The guy I have been working with for so long and in whom I have implicit trust – he built the second floor of my house some 25 years ago – has succeeded, against all odds, in raising a family which includes a doctor, a psychologist and a journalist (amongst others). He doesn’t want Israel in his backyard, but more than anything he wants to live his life, not to be humiliated as he crosses and recrosses the border on a daily basis and is, like most of us in Israel, exhausted by the never ending conflict, which the extremists on both sides are only too happy to maintain, each finding reasons to blame the other for being belligerent and anti-peace.

If you havn’t been at the border crossing points between Israel and the West Bank at 4-5 in the morning, or late afternoon, you have no idea what Israel’s internal borders are really like. I am happy to say that most of the week I continue to live in a growing community which has no fence or border, despite being just a few hundred meters away from one of the large local Bedouin towns, from where I hear the muezzin call to prayer at 4 every morning, to be followed by the choir of jackals that roam the hills (and come quite brazenly into our gardens and chew through our plastic irrigation pipes) because their natural roaming areas in the South Hebron – Northern Negev hills  have been curtailed by the construction of the West Bank separation wall just a few kilometers to the north.

There are those, especially amongst the younger generation, who are demanding the construction of a fence and the setting up of local militias to “assist” the police in patrolling the community (one which has grown from 1,000 to almost 10,000 inhabitants over the past 35 years). They are not all crazy right wingers (some definitely are) but have a perpetual fear that their Palestinian and Bedouin neighbours are a major security threat to them and their families. They came to control and settle this mesmerising Biblical land (we live exactly half way between Beer Sheva and Hebron, the daily travelling route of the Biblical Abraham – he surely opened his famous hospitality tent in my garden, but was not prevented from completing his journey by a great big concrete wall and border security personnel as he would be if he were attempting to make the same journey today). They are unaware of just how they have allowed themselves to be controlled by the neighbourhood. So, their solution is to create borders, fences and even stronger security.

We live in a world of borders, geographical, physical, perceptual, invisible, imaginary, borders. Borders – for good or for bad – maintain order in our lives. Governments, politicians, policy makers like borders because it enables them to compartmentalise and control, and for many people, borders are convenient structures which enable them to exclude those they dont want to see or interact with, and include only those who look like and behave like them. There is no, never has been, such a thing as a Borderless World, as the post modern globalists and dreamers of the 1980s and 1990s would have liked us to believe. Indeed, it is the reaction to this idea that has resulted in the huge renaissance of Border Studies during the past three decades, and which will result in the large meeting to take place this coming February.

Like everyone I live in a daily world of crossing borders: Between my Anglo background and my contemporary Israeli experience. Between the world of left wing secularism and increasing disconnected from the real world wokism at the university and a neighbourhood and family which are largely (although not exclusively) religious Zionist. Between my use of the Hebrew and the English languages – there is no greater border than language, the ability to understand or not to understand. I refuse to be stereotyped into a single compartmentalised frame, I try to make the borders of my life as elastic as possible, but it is not always successful. It is a fine line between being accepted, or disowned, by all – living a cross border experience as a matter of daily life leaves you in a sort of transition zone where you are never sure to which or what you belong. You have to have a strong, stubborn, constitution to do so willingly. Thankfully, I inherited those genes.

Truth be told we (our forefathers and mothers) didn’t come to this land to create the largest self imposed, fortified ghetto that ever existed in history – but that is exactly what we have done. The country is now enclosed with fences and walls as we struggle to control, rather than be controlled, by our immediate neighbourhood. We mostly live comfortable, middle class, lives in an exciting country, a good place to bring up children and grandchildren (certainly better than the UK I left behind, but which I continually visit and feel a lingering attachment), but the conflict remains on our doorstep. Some escape thinking about it by living in Tel Aviv and Gush Dan and turning a blind eye to what is happening just 20-30 kilometers away, a perceptual border if there ever was one,  as though it doesn’t exist. Others encounter it on a daily basis, on the roads, in the shops, on the building sites and nowhere more than at the separation barrier or walking the streets of Jerusalem and other mixed Arab-Israeli (Moslem-Jewish) cities and neighbourhoods. No government, right or left wing, are going to change that overnight (most left wing voters will tell you they are happy with the fences and walls and anything that maintains separation and perceived security).

And (to use a British understatement) I am not convinced that the new government, democratically elected by those enjoying Israeli citizenship , are going to do anything to move back to a potential path of conflict resolution (I wont use the airy fairy, often meaningless, words, such as peace and reconciliation, concepts which we can’t even begin to understand before we make some practical steps in conflict resolution). For every border we erase (the Israel-Egypt and Israel-Jordan peace agreements, the Abraham Accords), we manage to create two others in their place, specially between Israelis and  Palestinians in our backyard. There couldn’t be a more appropriate place to host what will be the largest international gathering of Border scholars and practitioners in the world. For more information about what promises to be an amazing meeting, see: https://world.absborderlands.org/

About the Author
David Newman is professor of Geopolitics in the Department of Politics and Government at Ben-Gurion University of the Negev. BIO: David Newman holds the University Research Chair of Geopolitics at Ben-Gurion University, where he founded the Department of Politics and Government, and the Centre for the Study of European Politics and Society (CSEPS) , and served as Dean of the Faculty of Humanities and Social Sciences from 2010-2016. Professor Newman received the OBE in 2013 for his work in promoting scientific cooperation between Israel and the UK. From 1999-2014 he was chief editor of the International Journal of Geopolitics. David Newman moved to Israel from the UK in 1982. In 2017 he was selected as one of the 100 most influential immigrants to Israel from the UK. His work in Geopolitics focuses on the changing functions and roles of borders, and territorial and border issues in Israel / Palestine. For many years Newman was involved in Track II dialogues between Israelis and Palestinians.He has additional research interests in Anglo Jewish history, and is a self declared farbrent Tottenham Yid.