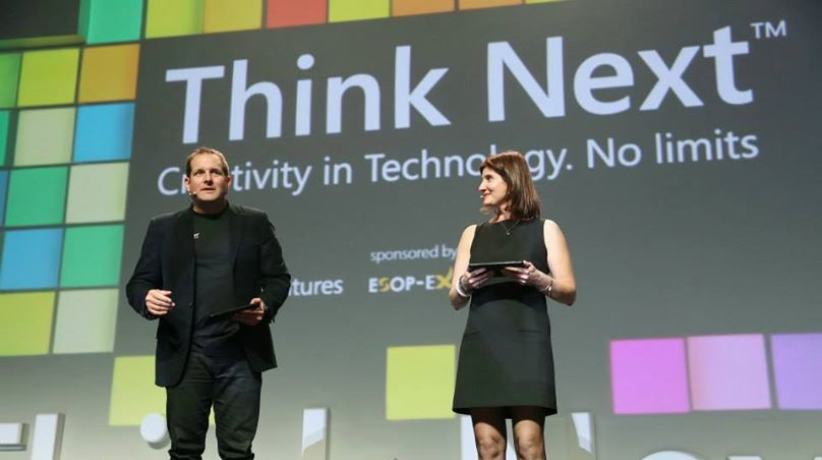 Hosted by Microsoft Israel R&D and Microsoft Ventures, Think Next exhibited yesterday the latest Israeli start-ups. Here are some of the highlights:

Creates customised QR Codes, which has caught the eye of Chinese e-commerce giant Alibaba. In their first Israeli partnership, Alibaba invested $5-10 million in Visualead, whose QR codes incorporate colourful GIF animation, shown to generate 50 – 400% more scans than those in black and white. QR codes are widely used in China to obtain information about products and avoid counterfeits, and could eventually be used to process payments.

Brings e-Commerce to TV, via Xbox One. Soon the 12 million Xbox One users (40% of whom are women) will be able to shop for clothing and ‘try it on’ before purchasing, using Von Bismark’s image capture and augmented reality technology. Analytics will ultimately show who buys what, and will enable retailers to better connect with their customers.

Showed off an unmanned-aerial vehicle (UAV) that detects threats within a 400 meter range, 45 degrees above and below the horizon. Power stations, communication towers, and national border guards could all benefit from these lighter and energy efficient UAVs, which at a $5000 price-point, are 3-7 times less expensive than what is currently available.

Provides digital shower systems for homes and commercial spaces. Its MEMS technology wirelessly connects faucets to their SmartGrid, which optimizes water usage, as well as monitors and diagnoses plumbing problems. In a pilot program at the Sheraton Hotel in Tel Aviv, the system improved water consumption by 30%.

Transcribes live radio into searchable text, which Audioburst segments into ‘bursts,’ so that specific sound bites may be found and shared. In addition to releasing developer API, AudioBurst is building their own app so that radio listeners will be able to easily find what’s interesting, now.