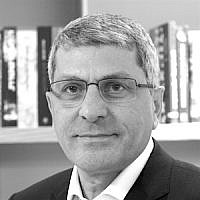 The Blogs
Dan Efrony
Apply for a Blog
Please note that the posts on The Blogs are contributed by third parties. The opinions, facts and any media content in them are presented solely by the authors, and neither The Times of Israel nor its partners assume any responsibility for them. Please contact us in case of abuse. In case of abuse,
Report this post.

Providing legal advice to commanders in war time is a difficult and challenging task, and even more so when hostile combatants use urban areas as their bases of operations.

Since the 1980s, all of Israel’s armed conflicts have been fought against non-state actors, prominent among them, the terror organizations Hamas and Hezbollah.

These non-state enemies systematically and deliberately violate international humanitarian law, and specifically its basic principles which reflect customary international law that binds any state or non-state actor engaged in an armed conflict.

At the same time, they view the commitment of democracies like Israel to the rule of law as a weakness, which they can exploit to boost their gains in each front of the conflict, and within each level of activity, both tactical and strategic.

On one hand, in order to deter the IDF from conducting offensive operations in the physical battlefield, Hamas and Hezbollah cynically use their civilian population as human shields.

The principle of distinction states that civilians should not be targeted deliberately in any armed conflict, while the principle of proportionality holds that a strike on an enemy target that carries the risk of harming non-combatants must be in proportion to the military advantage gained by striking the target.

On the other hand, if the IDF is not deterred from acting, the terrorist organization would use the apparent collateral damage, specifically, civilian casualties, as a powerful tool against Israel on other fronts, especially in the arena of legitimacy.

Consideration of “international legitimacy” has a significant impact upon policies of governments that are accountable to the rule of law.

Military action deemed to fall beyond the sphere of legitimacy, even if they are well within international law, can create major constraints for military and political decision makers during armed conflict.

One may reach a situation in which a clearly legal action, by any legal interpretation, may still be viewed by international public opinion as being illegitimate, whereas an unlawful action may be viewed as legitimate (or at least not illegitimate).

For example, as a hypothetical, consider that a strike on a terrorist commander while he is in his home may be viewed as a legal measure by international law, even if it later transpires that the terrorist commander had escaped from the building a few moments before the attack, which also inadvertently killed his family.

Yet in the legitimacy arena, such tragic consequences, underscored by appalling pictures of mangled bodies, would be exploited to divert the international public opinion, and to place the strike outside of the sphere of legitimacy.

Thus, this attack would probably be viewed as illegitimate despite being fully legal.

On the other hand, attacking a civilian building which indisputably is not a military target, causing damage to property with no casualties, may not be viewed as illegitimate, despite being unlawful.

In light of the above, terror organizations will do their utmost, with the help of sympathizers, to depict the Israeli political and military leadership as war criminals that should be sanctioned and even prosecuted in international forums.

This creates a win-win situation for the terror organizations. They hold the upper hand in a situation whereby one side is accountable to the law and the other side enjoys a kind of immunity, and has a strong incentive to violate international humanitarian law repeatedly.

When facing such dilemmas, military legal advisers base their opinions on the lawfulness of the military actions – in accordance with the international humanitarian laws – while the military commander must take their advice into account together with other considerations, such as the legitimacy consideration.

This has created situations in the past in which commanders could have exercised greater force than they did, even though the use of greater force would not have constituted a violation of the laws of armed conflict. The commanders nevertheless refrained from doing so, due to legitimacy concerns.

These challenges call for a great balancing act on the part of not only Israel, but also other democracies facing similar armed conflicts with non-state actors.

It requires a balancing act between meeting security interests on the one hand, and meeting humanitarian considerations on the other. Avoiding excesses that would lead to a slippery slope to massive human rights violations is vital.

On the other hand, democracies must avoid entering a suicidal situation where both hands are tied behind their backs due to unjustified legal restrictions.

A legal adviser to decision makers should keep this balance in mind when formulating opinions. This means that the adviser cannot negate any option that is not prima-facie in compliance with the principles of international humanitarian law, nor rubber stamp all proposed military measures.

Instead, the legal adviser should examine the operational details and look for creative ways of interpreting the law to establish a reasonable and acceptable legal solution, enabling the commander to execute their operational plans lawfully.

On some occasions, the solution lies in formulating legal arguments to justify the operational plans, and at other times, they lay in suggesting some changes to the proposed activity.

There are, of course, also times when legal advice is far more straightforward. At times it needs to be short, swift and unequivocal, expressing in advance of a suggested operation that it cannot be carried out because it is totally unlawful, and therefore, out of bounds.

About the Author
Dan Efrony is the former Military Advocate General of the IDF (2011-2015) and retired holding the rank of Major-General. He also served for 15 years in the IDF intelligence corps. rising to the rank of Lt. Colonel. He is Legal Advisor to Our Soldiers Speak (www.oursoldiersspeak@gmail.com).
Comments