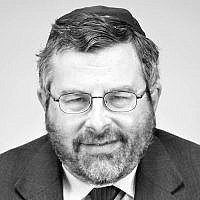 The Blogs
Bernard R. Gerson
Apply for a Blog
Please note that the posts on The Blogs are contributed by third parties. The opinions, facts and any media content in them are presented solely by the authors, and neither The Times of Israel nor its partners assume any responsibility for them. Please contact us in case of abuse. In case of abuse,
Report this post.

Life is a contest of understanding our tasks and then taking the lead as the heroes of our own, respective narratives with the necessary steps to improve and achieve.  This mechanism of self-awareness is largely autonomous; we are the makers of our decisions and accomplishments based upon our ability to intuit our own environmental circumstances.  How fortunate, then, when a caring individual takes the time to lend guidance based upon their own observations.

Moses is this fortunate beneficiary in Exodus, Ch. 18 when approached by his father-in-law, Yitro (for whom the Weekly Torah Portion in which the narrative is found, and which was read publicly in Jewish congregations just over a week ago:

“What is this thing that you are doing to the people? Why do you act alone, while all the people stand about you from morning until evening?”

Moses, in his own defense, pleads that he has been barraged by the needs of the newly born nation:

“It is because the people come to me to inquire of God.When they have a dispute, it comes before me, and I decide between one person and another, and I make known the laws and teachings of God.”

Yitro’s response and prescription, widely heralded as the forerunner of the administrative model for companies and governmental systems, and extrapolated upon beautifully by my friend Uzi Weingarten in his new book Moses and the Art of Advice (2019), is telling for its opening observation:

“The thing you are doing is not right; you will surely wear yourself out, and these people as well. For the task is too heavy for you; you cannot do it alone.”

And, in his ensuing words, Yitro depicts an elaborate method of delegation to hand-picked subordinates.

Adam Lieberman, a business consultant, comments that this seemingly logical and effective remedy remains a difficult pill for so many leaders to swallow.  He explains that “the moment we ask someone else to do something for us we immediately lose a sense of control. Even though we all have very capable people around us, many of us live with a belief that the best outcome can only occur when we do something ourselves.”

However, he continues, it is the opposite that is true; we arrive at greatness only after having taken the bold step of going  “outside ourselves,” through awareness that others are just as capable and, in fact, may actually be better poised to get the job done.  Self-awareness and the ability to trust are the operative attributes here. (Lieberman A, Delegate and Soar, 2019)

We might imagine how Moses would have fared if not for Yitro’s intervention. It would translate into mounting frustration, threats to his self-confidence – maybe even a premature recognition that he is not destined for this work forever, or even for the short term.

The revolutionary plan spawned by Yitro’s counsel, was made possible only by the concession of Moses to let go of his grasp on the enterprise of arbitration. This is a huge step for any leader – egotistical profile notwithstanding – and the tipping point toward greatness.

About the Author
Rabbi Bernard Gerson is a Consumer Service Associate at Anthem / Blue Cross-Blue Shield. He is enjoying the early days of his second career, following his retirement in 2018 from a 30-year tenure as a Congregational Rabbi and Judaic Studies Teacher. He remains active in Denver's Jewish community as a public speaker and community organizing activist.
Comments