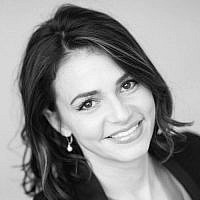 The Blogs
Emily Blout
Apply for a Blog
Advertisement
Please note that the posts on The Blogs are contributed by third parties. The opinions, facts and any media content in them are presented solely by the authors, and neither The Times of Israel nor its partners assume any responsibility for them. Please contact us in case of abuse. In case of abuse,
Report this post.

Five years ago, my city was the unwilling host of the largest gathering of neo-Nazis, white nationalists, and other white supremacist groups in America in nearly eight decades. Six hundred men with flags, shields, body armor and weapons descended upon Charlottesville, Virginia. The rally was ostensibly to protest the city council’s planned removal of a statue of Confederate army leader General Robert E. Lee. It was, in reality and intention, the violent coming-out party of the new “alt-right” white supremacist movement in America.

Over two days, individuals from 50 extreme-right groups and 39 states terrorized Charlottesville, rioting with political and ideological opponents on the streets in a savage show of hatred that culminated when a neo-Nazi drove his car into a crowd of activists, killing Charlottesville resident Heather Heyer, and wounding and maiming over two dozen others.

You may remember, in the ash and rubble of that day, President Donald Trump’s shameful remarks about there being “very fine people on both sides” of the rioting. Or perhaps you know about the candlelight vigils that popped up around the world in solidarity with Charlottesville’s beleaguered population.

What you probably don’t know is that my husband, mayor Mike Signer, is Jewish and was the victim of a concerted disinformation campaign centered around his Jewish identity.

It has been five years since the attack on Charlottesville. I haven’t spoken publicly about my personal experience as wife of the mayor, witness to and participant in the events, historian and media scholar. I feel compelled to now because of the breadth of the problem and the need to act quickly and forcefully against the common denominator of almost all lethal acts of white supremacists in America today: antisemitic conspiracy.

In the days and months following the rally, my husband was targeted with a host of antisemitic conspiracy allegations. One of the more popular narratives accused the mayor and a shadowy cabal (which included the Holocaust survivor and philanthropist George Soros) of staging the riots and the vehicular homicide as a “false flag” event with “crisis actors” hired through craigslist. Another complementary narrative said the mayor ordered the police to “stand down” and not intervene in the fighting between blacks and whites so that he could gain more power behind the scenes. Two years later, Charlottesville residents and UVA staff picked up their phones to hear a robocall blaming the murderous car ramming on the “Jew mayor” and the “negroid vice mayor.”

Charlottesville kicked off a troubling pattern of white supremacist terrorism in the US. In the months and years after the rally, lone-wolf attacks occurred with disturbing regularity. From Pittsburg to Poway to Buffalo, almost all had a through-line of antisemitic conspiracy.

We have seen some progress on this issue in court and in the Charlottesville case in particular. Mary McCord successfully sued a dozen violent militia that “patrolled” black neighborhoods, the synagogue, and the parameter of the rally, while Roberta Kaplan and Karen Dunn nailed Richard Spencer, Jason Kessler, Christopher Cantwell, and the other Unite the Right organizers for physical and emotional damages on behalf of a number of victims. Federal and state prosecutors convicted neo-Nazi James Fields Jr for vehicular homicide.

Recently, a US court found the shock jock Alex Jones guilty of defamation, forcing him to dole out millions in compensation to the grieving parents turned victims of his horrendous “false flag” conspiracy attacks that said that the gunning down of 20 children at Sandy Hook Elementary School never happened. But this penalty came far too late, and in the interim, Jones and the right-wing media ecosystem used the “false flag” and “crisis actor” frame to terrorize and harass numerous targets of white supremacist ire, including my husband.

While such legal measures certainly represent progress, we can and must do more. We need better strategies aimed at arresting the antisemitic propaganda feedback loop and stopping the people and institutions that peddle these lies before acts of violence occur. With a history of collaboration and joint culture of excellence in counterterrorism, Israel and America are uniquely equipped to do this work. And such coordination and intervention cannot come soon enough. I believe we can prevent the next Charlottesville, Pittsburg, Poway, and Buffalo but it will require getting real about the terrorist danger of antisemitic conspiracism online, in the media, and in our communities.

About the Author
Emily Blout, Ph.D., is a Senior Research Fellow at the International Institute for Counter-Terrorism, a visiting lecturer at the Lauder School of Government, Diplomacy, and Strategy at Reichman University, and an adjunct professor at the Center for Jewish Civilization at Georgetown University. Dr. Blout is author of Media and Power in Modern Iran (Bloomsbury, 2023) and co-author of “White Supremacist Terrorism in Charlottesville” (Studies in Conflict and Terrorism, 2021). Follow her on Twitter @emilyblout.
Related Topics
Related Posts