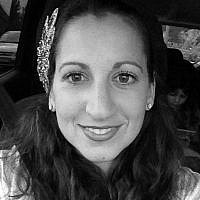 The Blogs
Farrah Dobuler
Apply for a Blog
Advertisement
Please note that the posts on The Blogs are contributed by third parties. The opinions, facts and any media content in them are presented solely by the authors, and neither The Times of Israel nor its partners assume any responsibility for them. Please contact us in case of abuse. In case of abuse,
Report this post.

Every morning is like a nightmare. We wake up to more news of our soldiers dying and how our enemies had planned on terrorizing and murdering us once again. I woke up this morning and something happened, I started thinking about the positive points, which must have been a favor from Gd, because lately, like many of us, I just don’t know how I can handle another day of sadness. Soldiers dying, sirens sounding, finding out yet another way of how our enemies planned on murdering us and most of all watching my children live through this and being powerless to help change their reality. So here it goes the light in the dark…Maybe this will ease some of our pain, maybe not but it’s worth a try.

WE ARE UNITED Soldiers are standing with their heads held high some are calling the Army to get themselves in, even if they were not called up. They are coming back from battle singing and dancing, filled with the pride of defending their country and nation. Soldiers are getting the honor and respect they deserve, like the hero’s they are, everyone all over the world and within Israel is donating whatever they can to make our soldiers lives more comfortable in and out of the battlefield. People throughout Israel are helping each other into shelters and on the roads when sirens are heard. We hear numerous stories of strangers covering other strangers and their children.

OUR GOVERNMENT IS PROTECTING US like never before. Netanyahu is finally making the tough decisions he needs to in order to protect us. The left and right of our government is united like we haven’t seen in recent history. We are standing together.

THE EVIL IN THE WORLD is showing it’s true colors. No need to argue anymore about Israel’s right to defend itself, it speaks for itself and anyone who can read and still disagree is ignorant or just plain Antisemitic. I don’t care if one thinks this is harsh. There is too much proof and too many interviews with Hamas leaders and their people showing pure hatred, if a person chooses to ignore it, that’s just what they are.

THE HAND OF GOD. Whatever Gd you choose to believe in or the capacity of which you chose to believe…there is no denying something else is at play here. The amount of times a rocket has landed in an open field that could have landed in a populated area, even terrorists have said they can’t fight our Gd. We are protected and not just by the Iron Dome or the Arabs stupidity.

MOST IMPORTANT there are no deaths in vain. This is a small condolence to ones who have lost their loved ones but they died true hero’s. Starting with Eyal, Gilad and Naftali. Those precious boys fought back and thwarted the Arabs plans of kidnapping which sent Hamas into a tailspin and led to our situation now. Hamas might have never been this desperate had they had a bargaining chip. If Hamas had not escalated, we would not have gone this hard into Gaza and there would have been 100’s if not 1000’s of more deaths from undiscovered Gaza terror tunnels.

These points are not fix it’s for our situation and won’t heal the pain we all feel when another hero dies or we lose loved ones but they are something to think about when we feel despair. When our tiredness from lack of sleep, worry and hopelessness takes over. When we have no more tears to shed because we have shed too much. When we have to “turn numb” in order to function throughout the day and be strong, if not for us than for our children who will lead the next generation of Hero’s.

May this war end quickly with no more deaths and the Soldiers of Israel return to us safely!

Advertisement
About the Author
Farrah Dobuler's journey toward religion started at a young age when she questioned life and the meaning of everything around her. Coming from a Liberal, Holocaust, Conservative, Reform, Democratic, Republican and Very Zionist background helped her develop a well rounded outlook on life. Till this day she is on her path, living in Israel with her husband and raising three strong beautiful girls. She believes people should be true to themselves and chose their own paths to follow as long as they are good to themselves and others.
Comments