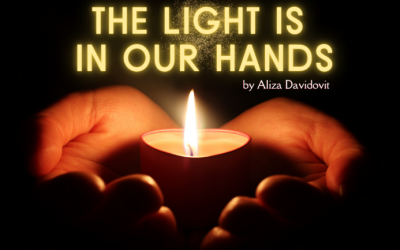 I always wished I could read the candles’ flames like the kabbalists could and know what they are trying to say. But their lights remain ever a mystery, and they burn until they are no more. Their final glow dissolves into a whisper of smoke and leaves me wondering what happens to that otherworldly light that envelops our homes for eight days? Life feels darker. They take with them their warmth and certainty only to be replaced by chilly intimidating shadows. And then I remember the words of Isaiah “And the nations shall walk at your light, and the kings at the brightness of your rising.” My fellow Jews, the torch has been passed to us: We ourselves are the lights that must live on once the festive candelabras are placed back up on the high shelf. We are the flames that must burn radiantly in our service to G-d and with our faith in Him. For it is only in the roaring eternal fire called faith, that we can extricate ourselves from the gravitational pull of uncertainty, fear, darkness and assimilation—and hence shine on.

Interestingly, it is at this time of year when the nights just start to get shorter and the light begins to prevail that we read parashah “Miketz” wherein Joseph is released from prison with great haste. Joseph who once found himself in the darkness of a snake-filled pit into which his brother’s had cast him and then later in the darkness of Pharaoh’s dungeon could have chosen to give up. What truly did he have to live for after being sold into slavery? His life seemed to be going from bad to worse. His brothers stripped him of his coat of many colors, also taking from him his pride, his innocence, and the years he could have been living peacefully by his father’s side. In some measure they killed everything about him, except faith and the light of G-d that burned inside him. Luckily, faith knows not shackles nor taskmasters nor pits or self pity—it sees only the light. The Bible teaches us something very interesting about Joseph’s attitude throughout his great suffering. The dungeon to which he is condemned is called Beit Hasohar, the “house of light.” Even in the depths of a dark dungeon, Joseph maintained his faith in God, he remained optimistic and hopeful and he created his own “light.” It was a house of light because he himself shone.

We must learn to do the same as we go through our own trials and tribulations. With laser-like intensity keep faith shining until it cuts right through the “dungeon” wall. It is a sin to succumb to despair and it is idol worship to believe that life is only worth living when we are riding high. In the story of Chanukah we learn how the golden Temple menorah had been stolen and there was only enough pure olive oil to last one day. The Maccabees didn’t sit around lamenting the darkness of their circumstance. They made a cheaper metal menorah. And the one day’s worth of oil miraculously lasted eight days. If only we would stoke our souls and refine our faith like pure olive oil, the miraculous light of Chanukah would be with us 365 days a year. In fact Jews are compared to olives for many reasons, one of them being that olives must be squeezed hard to yield their oil and it is through that pressing and those hardships that we yield pure light. The test and salvation is to see the light even while still in the “pressing.”

For just as abruptly as Joseph’s problems came upon him, they left him with equal speed as he was beckoned to interpret Pharaoh’s dreams. He went from being a prisoner to being the second most powerful man in Egypt. The cause of his woes, dreams, ultimately became his cure. My friends, the trials and hardships inflicted on man are limited. Just when a person least expects salvation, it is just around the corner. There is a season for everything in our lives, even a winter of discontent.

All the above is poetically inspiring but also useless if we only have faith in Hashem but give Him no reason to have faith in us. Joseph did not survive Egypt simply because he had faith; that would just make him a positive thinker. Self-help guru, Tony Robbins,  could have taught him that too. He survived and triumphed because G-d had reason to have faith in him. Despite all the perverse influences around him, he behaved like a Jew is commanded to behave and maintained his unique identity. The most beautiful woman in the world made daily advances toward him and he did not succumb because his father’s face and all the moral teachings of his faith guided his conscience and his deeds. Just like the Maccabees withstood the temptations of Hellenism, he withstood the corrupting influences of Egypt. Each prevailed.

No I cannot read the candles flames as I wish I could, but that is not my business after all. My job as is yours is to look our faith in the face and be honest. If a Jew really had faith in G-d he wouldn’t work on the Sabbath because he’d have faith G-d would provide. If he had faith he wouldn’t be scared to give charity because he’d be sure of G-d’s charity toward him.  If he had faith he wouldn’t dishonestly try and manipulate results in his life. He would do everything so differently because a person of faith will “let go and let G-d.” He would try but not over try. In all our worldly affairs we believe one hand washes the other, yet when it comes to G-d we are ready to collect with both hands and serve with neither. Our job is to illuminate the world with divine light. How does one do that? By living with faith and living faithfully. It will make all your dealings straight. Our faith mandates us to “shine” for all to see, just as the menorah’s lights must not be kept private, but rather must be placed in visible locations. We are not destined to be dimwits or dim-watts but rather a light among the nations. My beloved Yidden, we are bearers of the light. That is not our calling card–that is our calling!

About the Author
Aliza Davidovit is a journalist and author with a master’s in Journalism from Columbia University; She interviews prominent individuals who have an impact on Jewish life and the State of Israel; She is a contributing editor to numerous venues, appeared regularly on Fox News Live and worked at ABC News and Fox News; She writes a weekly biblical commentary: "The Source Weekly"