The Blogs
Ticia Verveer
Archaeologist, writer טיציה וארואר
Apply for a Blog
Advertisement
Please note that the posts on The Blogs are contributed by third parties. The opinions, facts and any media content in them are presented solely by the authors, and neither The Times of Israel nor its partners assume any responsibility for them. Please contact us in case of abuse. In case of abuse,
Report this post. 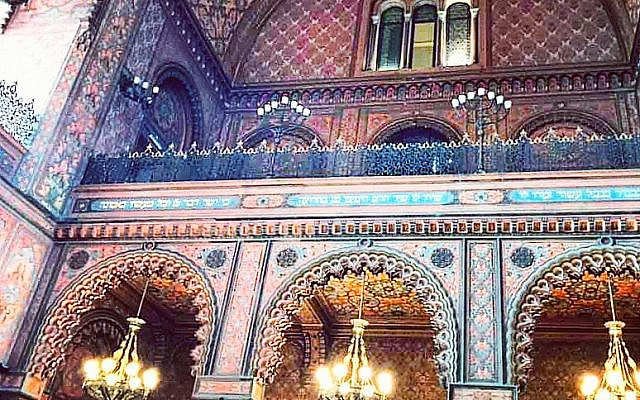 The Nazis grossly defiled the Synagogue of Florence in August 1944, when they detonated several mines in the interior and used the building as a garage where they repaired trucks.

The synagogue, at the Tempio Maggiore Israelitico, was ransacked and robbed of her ceremonial treasures but miraculously survived the Second World War. 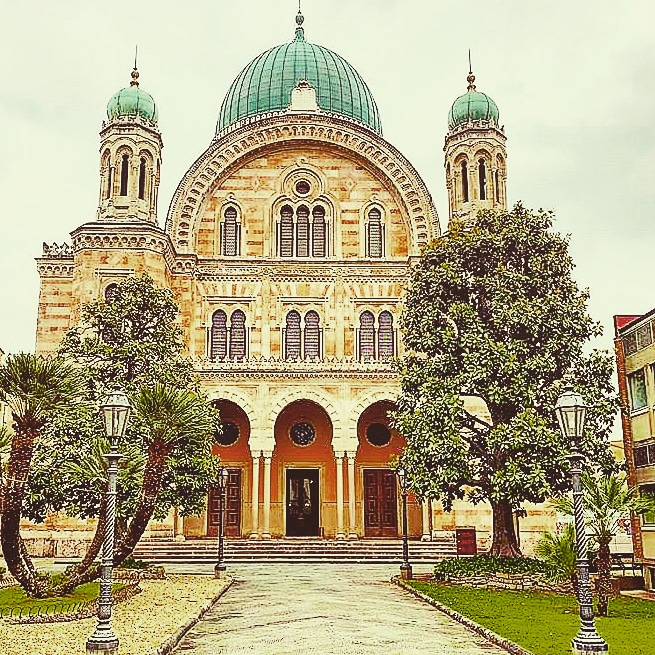 After the war, the Jewish community began the process of rebuilding and the synagogue was restored, until a severe flood broke out in 1966. The building became, again, heavily damaged. Most of the furniture, frescoes, mosaics, the historical library and 90 Torah scrolls desperately needed repair and restoration again. 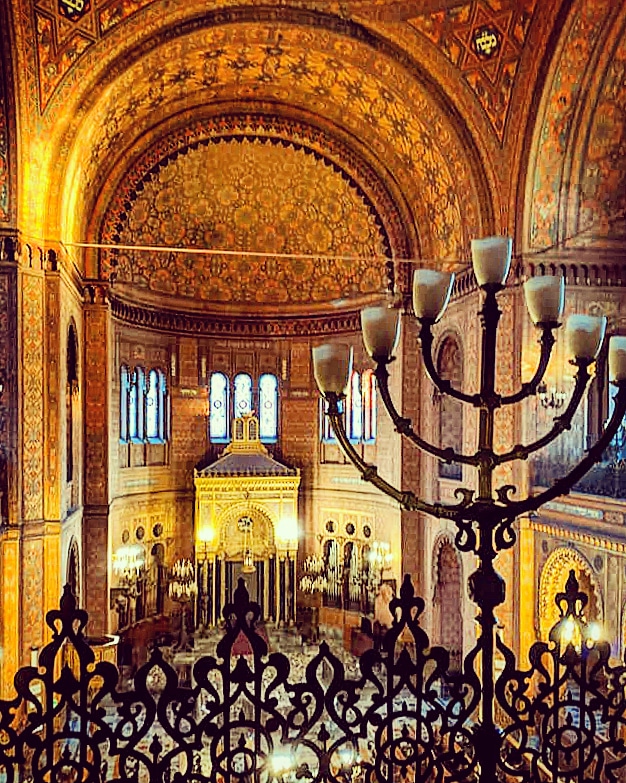 Today you can visit this impressive ‘house of assembly’ in his full glory. The building draws attention to itself, it isn’t discreetly located, nor is it small, it fills your heart with joy and gladness. 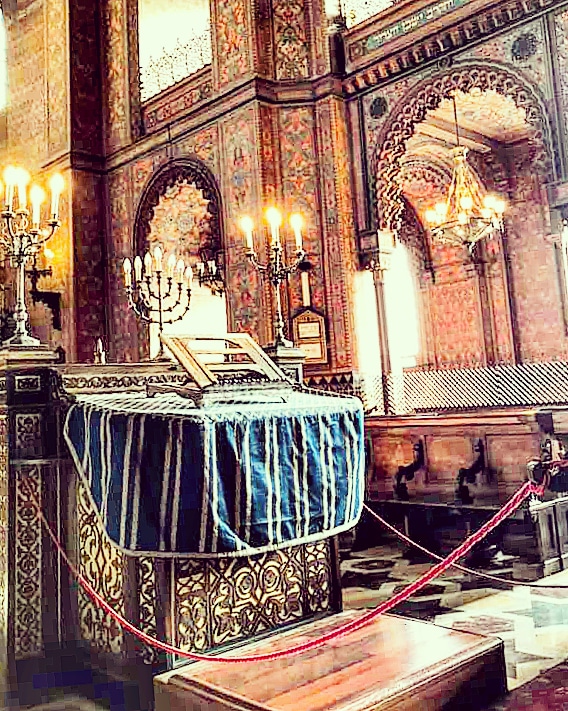 This grand temple reflects the self-confidence of an emancipated Jewish community. The Jews of Florence were granted civic rights in 1859 and the community decided to construct a monumental temple, illustrative of that period. The construction started in 1874 and was finished in 1882. 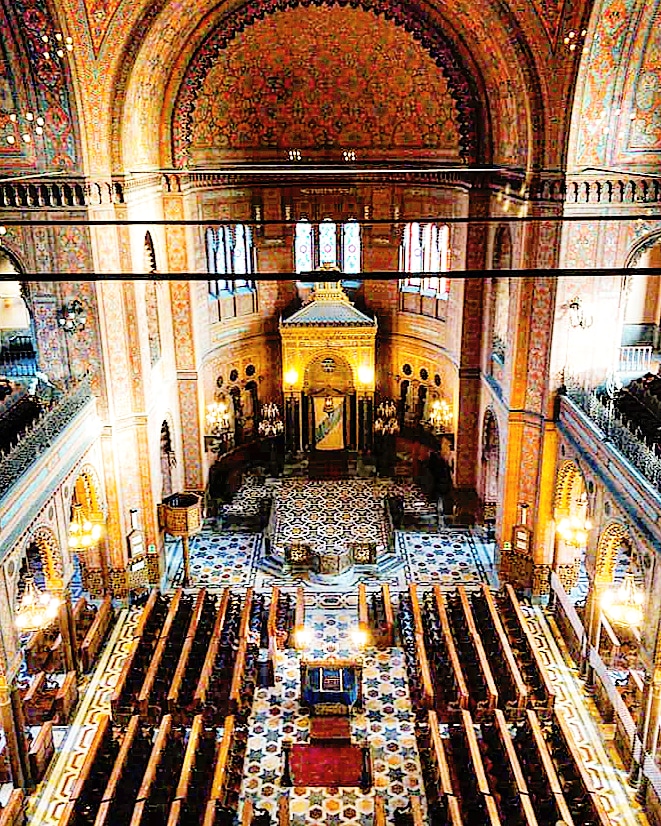 Inside the Synagogue of Florence. Photo Ticia Verveer.

It’s no surprise that over the past centuries it had been a completely different situation for the Florentine Jews. Even the ancient Jewish communities of Southern Italy and Rome, among the oldest in Europe, were subject to a wide range of restrictions.

During the fourteenth century the Jewish communities in the south declined because of persecution and forced conversion. The Jews were  invited to settle in Florence in 1437, with the support of Lorenzo de’ Medici, also known as Lorenzo the Magnificent.

When Cosimo I established a ghetto in 1571 and obliged the Jews to wear a segno (a yellow “o” on the hat), it was a major setback for the Jewish community. Before this, the Florentine Jews lived not far from the Ponte Vecchio.

They were moved to a small closed area, overcrowded, and with a lack of elementary hygienic facilities it became the cause of many diseases. The latter became one of the most difficult problems until its demolition in the last twenty years of the 1800’s.

The Orientalist architecture of the Florence synagogue, designed by the architects Mariano Falcini, Vincente Micheli, and Marco Treves, is the perfect mixture of elements borrowed from various examples. 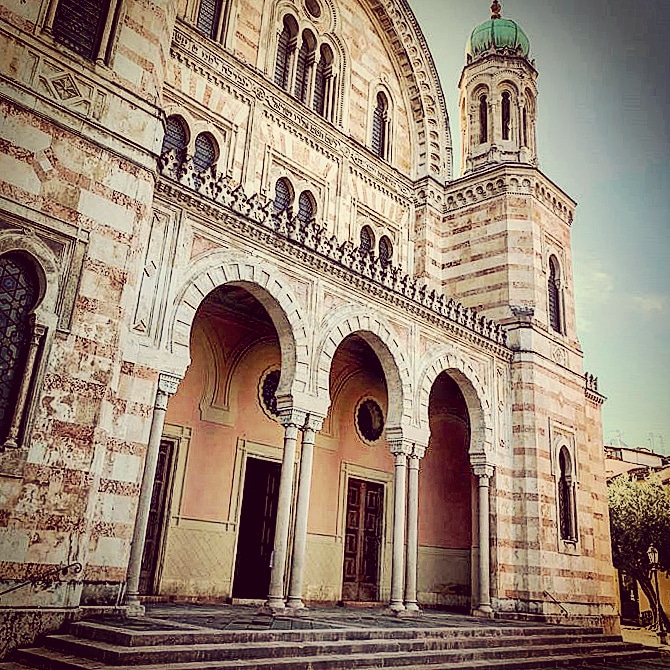 The dome, the third largest in the city, must have been inspired by Indian-Islamic architecture but was also copied from the Cologne synagogue. The characteristic copper dome and bulbs of the turrets were originally gilded. 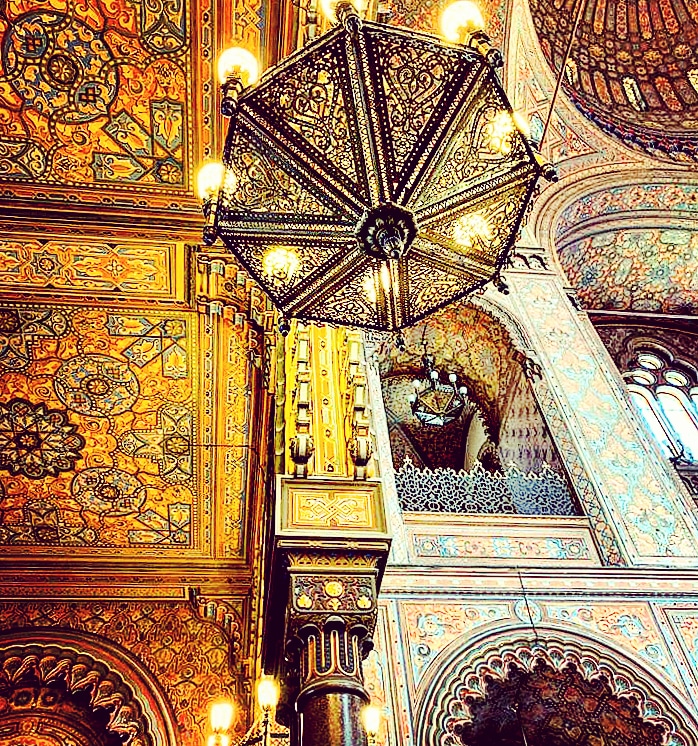 The Glockengasse synagogue, destroyed during the Kristallnacht, was the first example of a central plan over a Greek cross, that was covered by a dome. This plan is also used in Florence, widely used in Byzantine architecture.

The façade recalls the Oranienburgerstrasse Synagogue in Berlin, the bulbs on the turrets echo the Dohány Street Synagogue in Budapest, and the interior, with stunning polychrome decoration and stuccowork originated from the Alhambra. 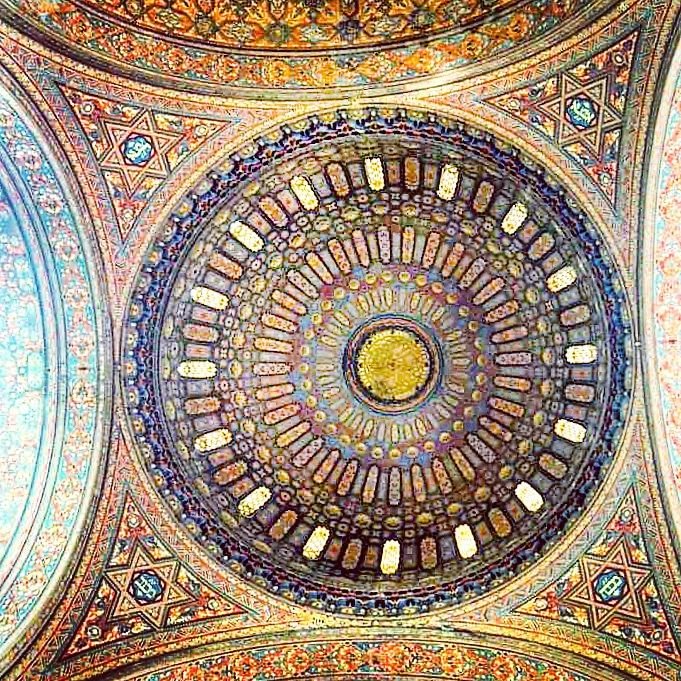 The temple in Florence is a unique blend of architectonical history and geographic areas, a reflection of the Jewish community scattered in exile, thereby gradually adopting different customs, interpretations, languages and cultures. 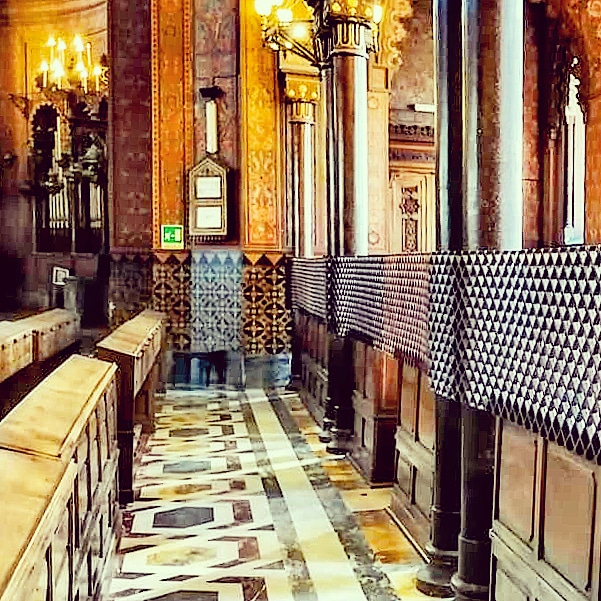 Today a museum resides on the first and top floor, which is divided into sections: one illustrates the history of the Jews in Florence, with a room dedicated to the Shoah, and the other displays religious and ceremonial objects. 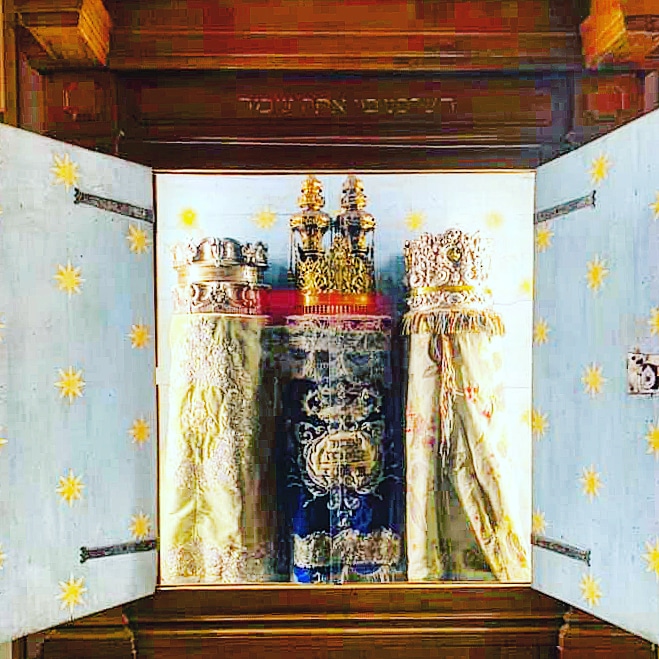 Traditional objects, used to mark the important events in family life, such as birth, marriage, and death fill this lovely collection. 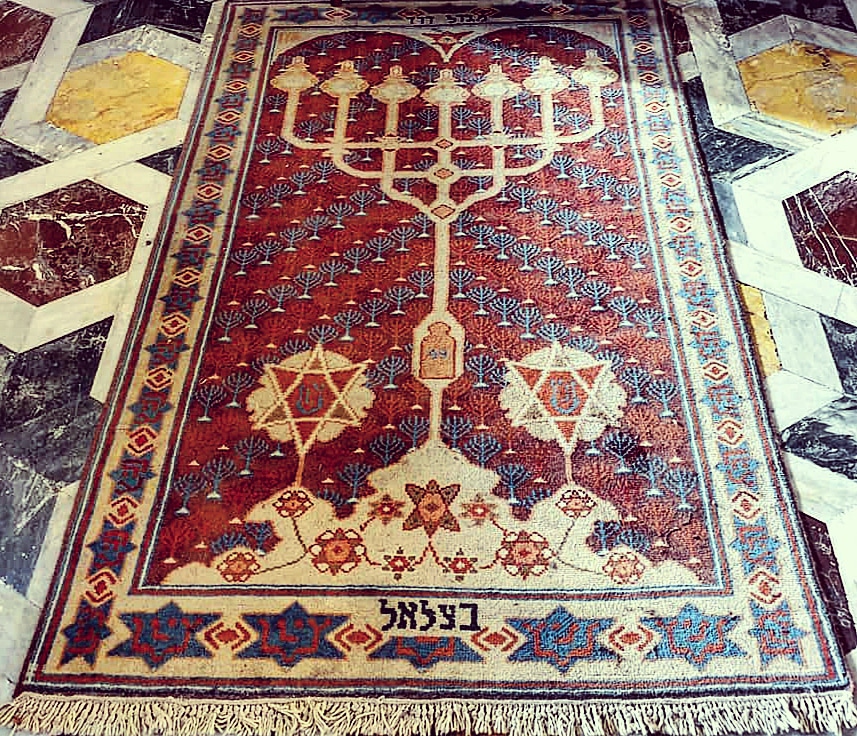 The essentials needed for domestic celebrations are present, including sabbath candlesticks and menoroth. Here, in the museum, you can admire the earliest examples of the Hanukkah lamp, decorated with a row of horseshoe arches, backed by a metal plate.

The vertical plague that joined the burners became the support for a rich and varied decoration. These menorahs were often wall-mounted, and the back served to protect the wall from fire and smoke.

Today we speak of a hanukkiah, this word is a relatively modern invention, attributed to Hemda Ben Yehudah (1873-1951), the wife of linguist Eliezer Ben Yehuda. 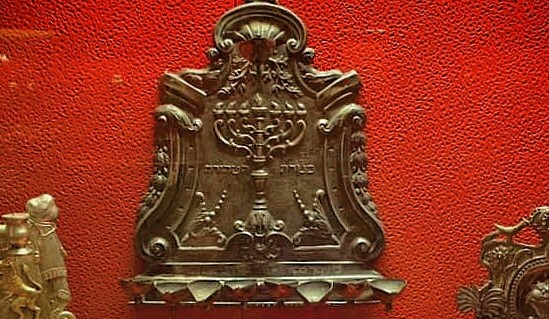 The seven-branched candelabrum used in the Temple is one of the oldest symbols of the Jewish faith. After the Temple was destroyed, a tradition developed not to duplicate anything from the Temple.

Interestingly most of the menoroth found in the archaeological record have seven arms, but there are also many examples of three-, five, six-, nine-, and eleven-branched menoroth. One depiction of a thirteen-branched menorah has also been found.

As Rachel Hachlili points out, the number of branches of the menorah, may relate to the prohibition in rabbinical sources against menoroth with seven branches, but this prohibition does not appear in the Jerusalem Talmud. There has been a popular use of six- branched menoroth, but some rabbis have gone back to the seven- branched menoroth. 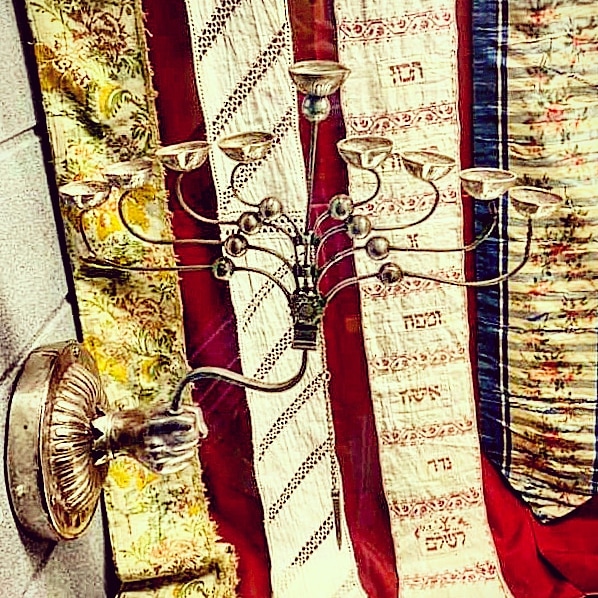 It is a fact that the nine-branched hanukkiah serves only for the eight days of the Hanukkah feast. One candle for each night, plus a servant candle (shamash) at a different height. 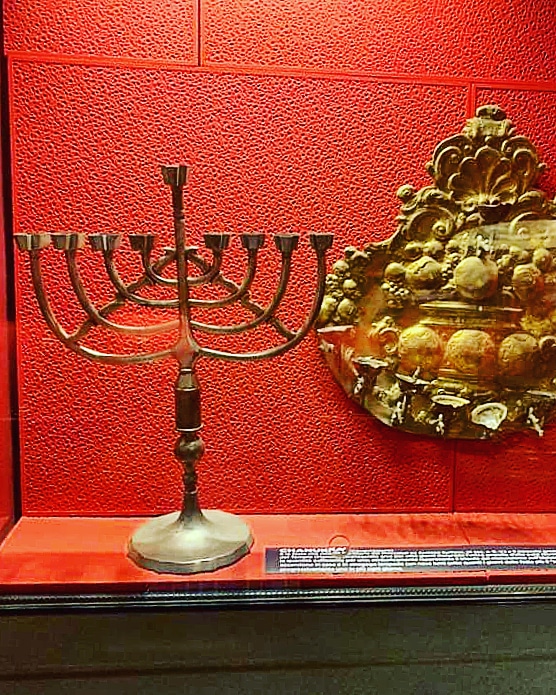 The name of the festival is given for the first time in the scholium to Megillath Ta’ anith (Shab. 21b). The text says that on entering the Temple the Maccabees found an oil jar which would have sufficed for only one day’s illumination, but a miracle occurred which caused it to last for eight days.

In commemoration, a festival lasting eight days was instituted. Possibly by the second half of the first century CE the custom of kindling lights on Hanukkah was fixed and became widespread from where it developed from a Temple festival into a family one (R. Hachlili). 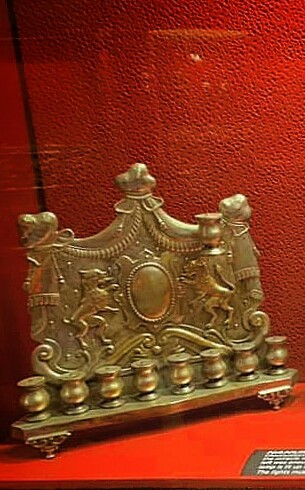 Kindling the hanukkiah’s lights to make them visible to the street carries a large, symbolic significance. The lights are a reminder of life and growth, despite enemies who have tried to destroy us throughout history.

The same goes for the synagogue in Florence, which is clearly visible from the street. This synagogue has a spiritual radiance that is brought out into the world. The Jewish community intended to share this building with others.

Hanukkah, which is linked to the Hebrew root-word for “dedication,” symbolizes the faithful commitment to Jewish identity. Claiming their space by building a synagogue on this square was an expression of religiosity and group identity. 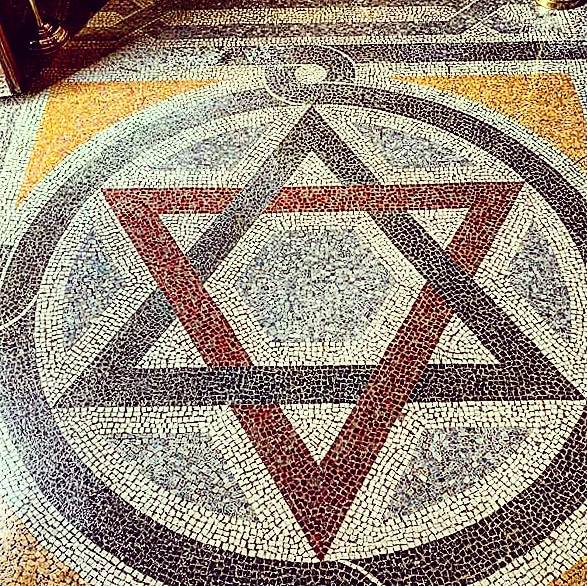 The Florentine Jewish community affirmed their Jewish identity by creating this magnificent temple. Here and now, one feels a sense of faith and historical connection. What better way to spend Hanukkah?

Have a joyous Hanukkah. 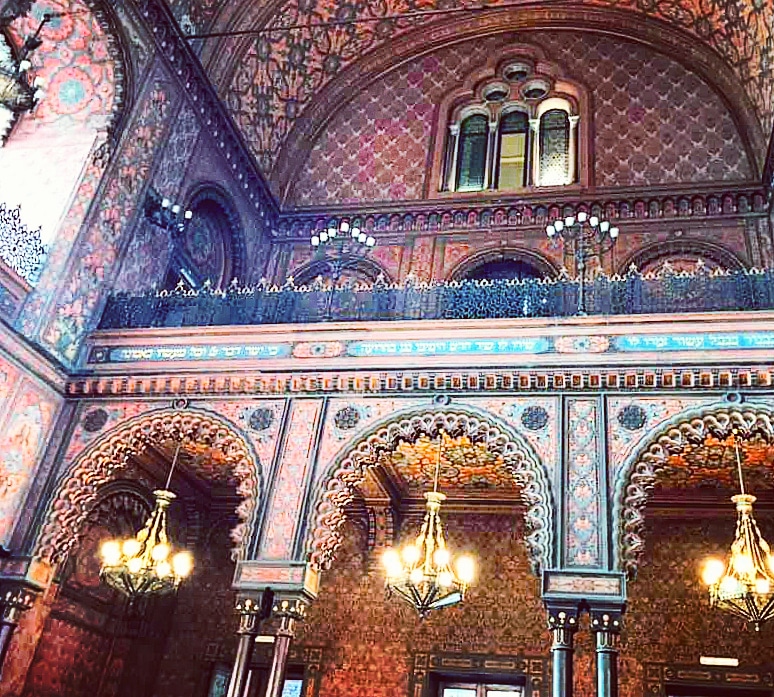 Stephanie B. Siegmund, 2005. The Medici State and the Ghetto of Florence: The Construction of an Early Modern Jewish Community (Stanford University Press).

Steven Fine, 2016. The Menorah; From The Bible to Modern Israel (Harvard University Press).