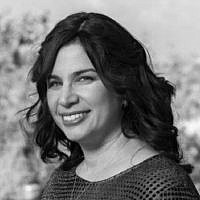 The Blogs
Dassi Jacobson
Apply for a Blog
Please note that the posts on The Blogs are contributed by third parties. The opinions, facts and any media content in them are presented solely by the authors, and neither The Times of Israel nor its partners assume any responsibility for them. Please contact us in case of abuse. In case of abuse,
Report this post. 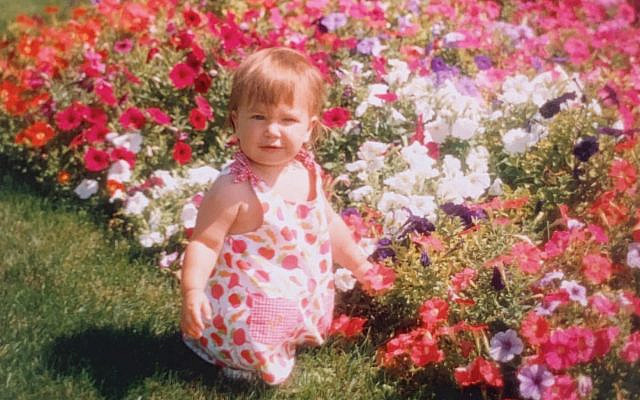 How can it be that 20 years feels like both a lifetime and the blink of an eye? Twenty years ago last week, in a tragic accident, we lost our daughter Eliana. For a few moments, I want to remember Eliana as she was. There are only a few memories that are still really sharp for me, and the images float by in my head as I write. I remember immediately after Eliana was born and we counted her fingers and her toes, and fretted over pistachio-sized red spots over her eyes: were they birthmarks? The doctor assured us that they were popped blood vessels from delivery trauma, and would disappear within a year or two. “Already worrying? What, she’s not perfect?” he teased, as we gazed at our newborn baby. “We just want her life to be easy,” we responded.

After that, many memories of Eliana include her big sister, exactly two years her senior; they were a spirited and beautiful pair. Our older daughter was always watching out for Eliana, she made her a partner in crime from when she was a sleepy newborn, crying excitedly, “She’s eyes open” whenever she passed the car seat or the cradle and noticed Eliana was alert, to a long winter drive to Vermont, when, along the way the hungry big sister announced from her car seat, “We want a challah roll, right, Eliana?”

I remember sweet little moments with Eliana alone, also; her laughter when something struck her as funny, and how at 2 she was just beginning to grasp the concept of a joke. “You funny, Ema,” she would say. She had begun to discover the beauty and splendor of the world around her — on a walk or a drive pointing to a colorful garden and commenting, “Byooful (beautiful) flowers,” or asking relentlessly for “soyberries” (strawberries). If she heard a loud noise or a siren, instead of getting upset, she would look at me quizzically and say, “People do dat (that), it’s not nice.” It was her quiet protest to the disturbance of the peace around her.

Some of my memories of Eliana never actually happened, because after she noticed the beautiful flowers and learned to laugh at her parents’ silly jokes, she was so quickly, and permanently gone, frozen in time.

One night, probably within two years after we lost her, I had a beautiful dream in which Eliana was running freely in an endless green meadow surrounded by a grove of tall trees. This dream stands out because it was not scary or sad, it was just a beautiful little girl with loads of energy, living. Over time, it became part of my lexicon of Eliana images. All of these beautiful images became part of the collection of photos and video clips that I have curated in my mind’s eye, and they counter and soften and even neutralize the nightmare that unfolded on a sunny Wednesday morning, on יא סיון תשס, June 14, 2000.

This 20th yahrzeit, a “milestone” yahrzeit, has put me in a reflective mood for many months already. I think about the passage of time, what it means to lose someone young and full of potential unrealized. How a mother, a father, a sister, a whole gaggle of brothers born after, grandparents, aunts, uncles, cousins, and a surrounding loving community, heal from such a loss, grow, evolve, face new challenges, live. How do we thrive?

For our son’s bar mitzvah Shabbat this year, we selected birkonim (song books) which include traditional zemirot (Shabbat songs) as well as shirei Eretz Yisrael (songs of Israel). Naomi Shemer’s 1961 song חורשת האקוליפטוס (The Eucalyptus Grove) has become a household favorite. It is an ode to the passage of time and it is, for me at least, simultaneously uplifting and somber. In its simple beauty, the song describes a young couple building a house on a hill, and half a century passes, dark locks turn to grey, the children turn from toddlers to teenagers to paired-off adults, who eventually build themselves a house on a hill as well. Everything changes over time, and certain things stay reassuringly consistent: the eucalyptus grove on the edge of the river, the bridge, the salty scent on the water. The song describes an idyllic reality except for one part, the tanks that rumble across the Jordan, and the peace that returns at the end of the summer. For me, 59 year after it was written, this infuses it with a heaviness as I stand before this summer when, in a new challenge for our family, our first son will enlist in the Israeli army. It seems to me that the threat of the tanks is what turns the children into adults in this song, and leads to the establishment of new households.

Our Abba built a hillside house to warm her.

A half a century’s gone,

And locks that since have turned to grey adorn her.

But on the Jordan’s banks

As the day that she first came,

The set’s the same, that stoic hush:

The grove of eucalyptus,

The boat, the wooden bridge,

The scent of sage and saltbrush on the water….

And all the babes in arms are women now and men,

Upon the hill, they’ll build their own new houses.

But on the Jordan’s banks…

Twenty years ago, Eliana left us, and we grew up. I like to believe that we would have grown up anyway, even if she had stayed, and perhaps our lives would have been a little lighter. As it happened though, we built our house on a hill without Eliana. Though her captured beauty graces the walls and even one corner of the messy, photo-plastered refrigerator, she is not physically here with us. And while I do sometimes reflect on the delicious beauty that I described earlier, that little girl is not really the one I miss.

Someone in our neighborhood who lost a young nephew in a tragic accident came over to talk, and she asked me, as she held her coffee cup and looked at the family photos that adorn our stairwell, if the hole in the family picture ever goes away. She was apparently taking a survey of all the people she knew who had lost a child, and she had gotten conflicting answers. I said for me the hole is never filled, and it is also not always there. I don’t look at family photos and think, where is Eliana? Or even, this photo is incomplete. And then, sometimes, it strikes me.

Twenty years later, who would you be Eliana? Would you be energetic, creative, intellectual, devout? Would you love the outdoors or prefer the couch, a soft blanket, and a book? Or maybe both? Would I reflect on your easy or difficult adolescence? Would you like history or psychology or computers or Tanach (Bible), running or basketball? Fantasy or realistic fiction? Flowers or stripes? Would you be easily distracted or super-focused? Would you be an instigator or a peacemaker? Or a little of each? Would you do army or Sherut Leumi (National Service)? Would I walk into a store and see a light summer dress and think, that’s so Eliana, and would you love it at first sight? Or would I always get it wrong and give up shopping for you, and say, “Take the credit card” instead? Would you like cappuccino and salad, or prefer pizza and fries? Whom would you bring home to join our table and our family? Would you laugh with your exuberant big sister, or carve your own quiet corner? Would you roll your eyes and also love your brothers’ dry humor, earnestness, idealism, curiosity, off-road adventures, and post-marathon sweaty smiles?

These questions are currently unanswerable. Eliana is forever the sweet 2-year-old of the floppy hair and the shining eyes, of Hatikvah at bedtime, and of belly laughs and helium “badoons” (balloons), and the gear game that she loved. And she is also whoever we imagine her to be.

And our lives, in addition to the challenge of the loss of Eliana, and all its repercussions for our family, and all the painful images associated with the devastation of Eliana’s death, blessedly include other images: of family, and fellowship, and hilarity, and gravity, and rising to the occasion, of good parenting moments and bad parenting moments, of sibling rivalry and divrei Torah (Torah thoughts) and philosophical debates at the Shabbat table. There is so much love and so much laughter. 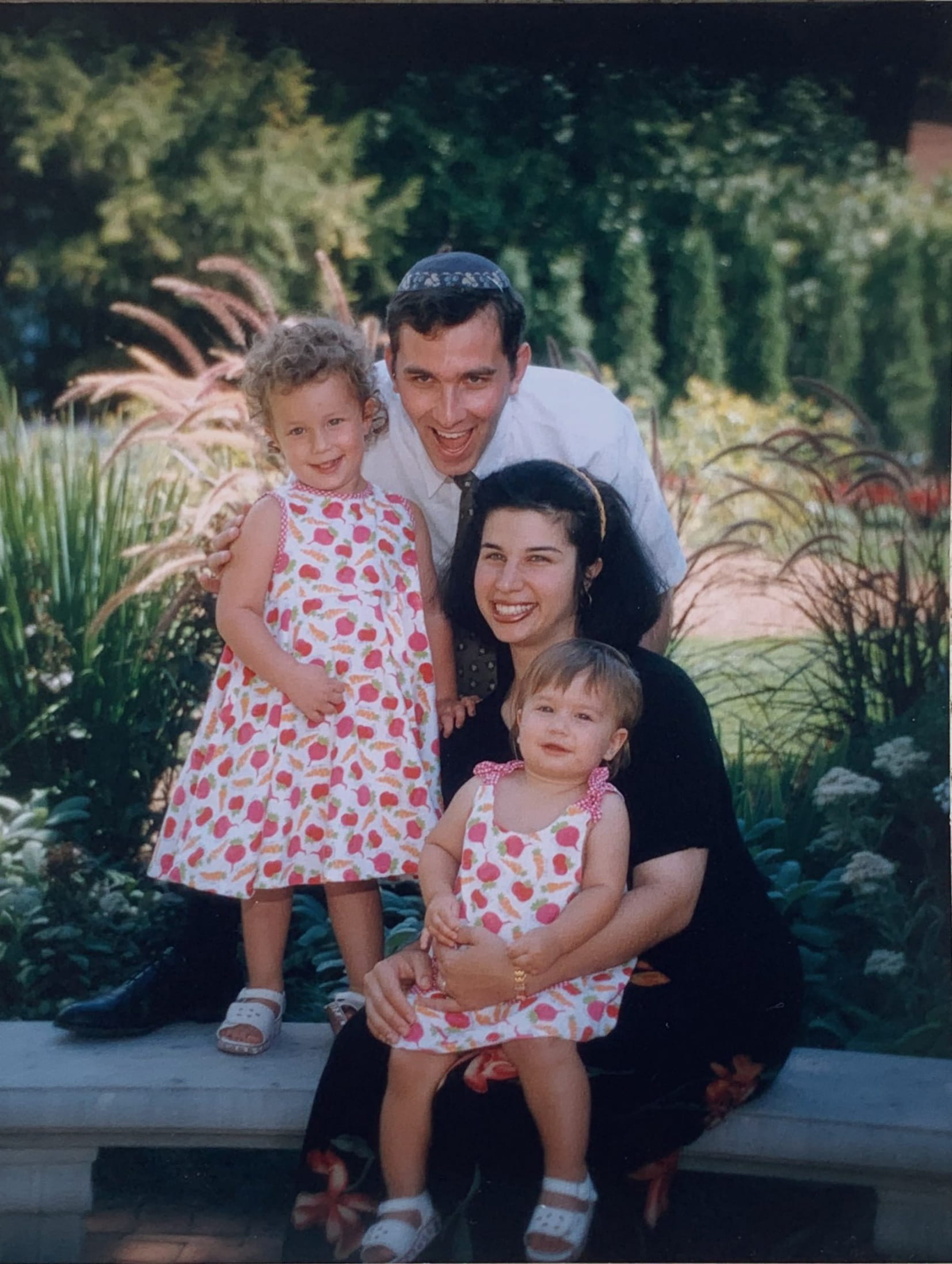 It is sad that our family picture does not include Eliana’s visage. The last family photo on our wall in which she appears is from 1999. We still have a beautiful family photo, though, recently updated, with the help of God’s blessings, and a lot of hard work, and her memory completes it.

About the Author
Dassi (Billet) Jacobson, PhD is a psychologist in private practice in Jerusalem and Gush Etzion. A native New Yorker, she has lived in Gush Etzion with her family since 2005.
Related Topics
Related Posts
Comments