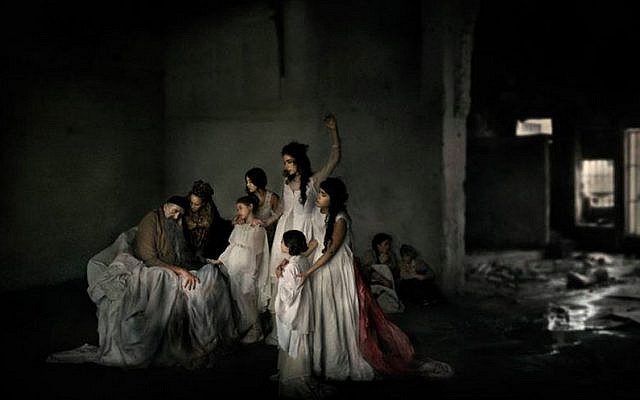 Illustrative: Michal Baratz Koren's portrait of the five daughters of Zelophehad, who first raised before Moses the case of a woman’s right and obligation to inherit property in the absence of a male (Courtesy, Michal Baratz Koren)

A true story that took place in 1995. It concerns the legacy of an unusual man with an unusual name: Mr Ernest Onians, a farmer in East Anglia whose main business was as a supplier of pigswill. Known as an eccentric, his hobby was collecting paintings. He used to go around local auctions and whenever a painting came on sale, especially if it was old, he would make a bid for it. Eventually he collected more than 500 canvases. There were too many to hang them all on the walls of his relatively modest home, Baylham Mill in Suffolk. So he simply piled them up, keeping some in his chicken sheds.

His children did not share his passion. They knew he was odd. He used to dress scruffily. Afraid of being burgled, he rigged up his own home-made alarm system, using klaxons powered by old car batteries, and always slept with a loaded shotgun under his bed. When he died, his children put the paintings on sale by Sotheby’s, the London auction house. Before any major sale of artworks, Sotheby’s puts out a catalogue so that interested buyers can see in advance what will be on offer.

A great art expert, Sir Denis Mahon (1910-2011), was looking through the catalogue one day when his eye was caught by one painting in particular. The photograph in the catalogue, no larger than a postage stamp, showed a rabble of rampaging people setting fire to a large building and making off with loot. Onians had bought it at a country house sale in the 1940s for a mere £12. The catalogue listed the painting as the Sack of Carthage, painted by a relatively little known artist of the 17th century, Pietro Testa. It estimated that it would fetch £15,000.

Mahon was struck by one incongruous detail. One of the looters was making off with a seven-branched candelabrum. What, Mahon wondered, was a menorah doing in Carthage? Clearly, the painting was not depicting that event. Instead it was portrait of the Destruction of the Second Temple by the Romans. But if what he was looking at was not the Sack of Carthage, then the artist was probably not Pietro Testa.

Mahon remembered that the great 17th-century artist Nicholas Poussin had painted two portraits of the destruction of the Second Temple. One was hanging in the art museum in Vienna. The other, painted in 1626 for Cardinal Barberini, had disappeared from public view sometime in the 18th century. No one knew what had happened to it. With a shock Mahon realized that he was looking at the missing Poussin.

At the auction, he bid for the picture. When a figure of the eminence of Sir Dennis bid for a painting the other potential buyers knew that he must know something they did not, so they too put in bids. Eventually Sir Dennis bought the painting for £155,000. A few years later, he sold it for its true worth, £4.5 million, to Lord Rothschild, who donated it to the Israel Museum in Jerusalem, where it hangs today in the memory of Sir Isaiah Berlin.

I know this story only because, at Lord Rothschild’s request, I together with the then director of the National Gallery, Neil MacGregor, gave a lecture on the painting, while it was shown briefly in London, before being taken to its new and permanent home. I tell the story because it is so graphic an example of the fact that we can lose a priceless legacy simply because, not loving it, we do not come to appreciate its true value. From this, we can infer a corollary: we inherit what we truly love.

This surely is the moral of the story of the daughters of Zelophehad in this week’s parsha. Recall the story: Zelophehad, of the tribe of Manasseh, had died in the wilderness before the allocation of the land. He left five daughters but no sons. The daughters came before Moses, arguing that it would be unjust for his family to be denied their share in the land simply because he had daughters but not sons. Moses brought their case before God, who told him: “What Zelophehad’s daughters are saying is right. You must certainly give them property as an inheritance among their father’s relatives and give their father’s inheritance to them” (Num. 27:7). And so it came to pass.

The sages spoke of Zelophehad’s daughters with the highest praise. They were, they said, very wise and chose the right time to present their request. They knew how to interpret Scripture, and they were perfectly virtuous.[1] Even more consequentially, their love of the land of Israel was in striking contrast to that of the men. The spies had come back with a negative report about the land, and the people had said, “Let us appoint a [new] leader and return to Egypt” (Num. 14:4). But Zelophehad’s daughters wanted to have a share in the land, which they were duly granted.[2]

This led to the famous comment of Rabbi Ephraim Luntschitz of Prague (1550-1619) on the episode of the spies. Focusing on God’s words, “Send for yourself men to spy out the land of Canaan” (Num. 14:2), Luntschitz argued that God was not commanding Moses, but permitting him to send men. God was saying, “From My perspective, seeing the future, it would have been better to send women, because they love and cherish the land and would never come to speak negatively about it. However, since you are convinced that these men are worthy and do indeed value the land, I give you permission to go ahead and send them.”[3]

The result was catastrophic. Ten of the men came back with a negative report. The people were demoralized, and the result was that they lost the chance to enter the land in their lifetime. They lost their chance to enjoy their inheritance in the land promised to their ancestors. The daughters of Zelophehad, by contrast, did inherit the land — because they loved it. What we love, we inherit. What we fail to love, we lose.

I cannot help but think that in some strange way the stories of the daughters of Zelophehad and the auction of the missing Poussin illustrate the state of Jewish identity today. For many of my contemporaries Judaism was like the story of Ernest Onian’s penchant for paintings. Judaism was something their parents had but not something that was meaningful to them. Like Onians’ children they were willing to let go of it, unaware that it was a legacy of immense value. When we do not fully appreciate the value of something, we can lose a treasure without ever knowing it is a treasure.

Judaism, of course, is not a painting. It’s an identity. And you can’t sell an identity. But you can lose it. And many Jews are losing theirs. Our ancestors have given us the gift of a past. We owe them the gift of a future faithful to that past. At least we should not relinquish it simply because we don’t know how valuable it is.

The life-changing idea here is surely simple yet profound: if we truly wish to hand on our legacy to our children, we must teach them to love it. The most important element of any education is not learning facts or skills but learning what to love. What we love, we inherit. What we fail to love, we lose.

If we truly wish to hand on our legacy to our children, we must teach them to love it.