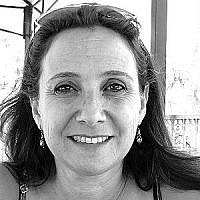 The Blogs
Rebecca Bermeister
Apply for a Blog
Advertisement
Please note that the posts on The Blogs are contributed by third parties. The opinions, facts and any media content in them are presented solely by the authors, and neither The Times of Israel nor its partners assume any responsibility for them. Please contact us in case of abuse. In case of abuse,
Report this post.

My daughter’s first pre-school friend was a beautiful, dark skinned child with a pretty, round face and large, soft black eyes. I was equally attracted to her mother, Miriam, who strapped her baby firmly onto her back with a large piece of coloured cloth ~ the way tribal women do, and we became good friends.

Miriam came from Manipur, a small village that rests on India’s north-eastern boarder adjacent to Burma. The traditional song of her tribe speaks of a time when, “… we are preparing for the Sikpui (harvest) feast, the big red sea becomes divided…we are lead by a pillar of cloud by day and pillar of fire by night…collect the quails, and draw the water that springs out of the rock.”

Striking enough of a resemblance to the Exodus narrative, anthropologists and biblical scholars allowed for the possibility that this group of Kuki-Mizo from Manipur, who believe themselves to be descendents of Mamasi or Menashe and refer to themselves as Bnei-Menashe, may in fact be part of the lost tribes of Israel. Forced to convert to Christianity by late 17th century missionaries, whether their claims were legitimate or not, Miriam’s rabbinic conversion to Judaism made her as Jewish a mamma as I had ever met, in the eyes of all in our community.

Pioneered by Rabbi Eliyahu Avichail during the eighties, the search for the lost tribes continued over the next few decades, and with the establishment of Amishav, a body dedicated to the cause, some 2,000 Bnei Menashe have been converted by rabbinic law and integrated into modern, Jewish Israeli life. But while the integration of the remaining 9,000 proceeds slowly, the numbers pale in significance when compared with claims that the rest of our mis-located tribal brothers may have made their way deep into Afghanistan and could number as many as fifty million, both in Afghanistan itself and in the surrounding countries of Pakistan and India. They are known as the Pashtun or the Afghans in Persian, the Pathans in Hindi.

As far back as 1836, Scottish explorer Sir Alexander Burns wrote, ”The Afghans call themselves ‘Bani Israel’ but consider the term Yahood…to be one of reproach. The Afghans look like Jews and the younger brother marries the widow of the elder.” In the late fifties, Israel’s second president, Itzhak Ben Zvi writes about the exiles from the northern Kingdom of Israel (Samaria) by the King of Assyria saying,“the Afghan tribes, among whom the Jews have lived for generations, are Moslems who retain to this day their amazing tradition about their descent from the ten tribes”.

It is generally agreed upon that modern day Jews, come from the Kingdom of Judah, incorporating Benjamin, Simeon and part of Levi and that the Ethiopian Jews are descendants of Dan, leaving the remaining tribes who are believed to have settled as far east as India, Tibet, Cashmere and Afghanistan. In a documentary by Simcha Jacobovici, entitled ‘Quest For the Lost Tribes’, the Moshakhel tribe who claim heritage from the people of Moshe (Moses), talk about sacrificing sheep on religious occasions and lighting oil lamps on Friday night to ask for forgiveness and blessings from God. Maintaining strong patriarchal custom, tribes called Rabbani (Reuben), Gadoon (Gan), Afridi (Ephraim) and Ashuri (Asher) scatter the hostile landscapes of the Khyber Pass. In the second book of Kings when the Assyrians conquer the northern tribes they are exiled to Chavor (Khyber), on the river of Gozan (the Gazni river).

On this multifaceted and complicated issue, the jury is still out, but clear signals from within the tribal leadership of the Afghani Pashtun, Jewish Kabbalists, biblical scholars and Israeli anthropologists have begun to move towards exploring the intriguing and mind-blowing possibility that the banks of the wellsprings of the ingathering, which started with a trickle of migrants from India, may soon burst with a Tzunami from Afghanistan.

The Pashtun are the largest ethnic group in Afghanistan making up the majority of the Mujahideen and the Taliban – who used foreign funding to entice and radicalise young children, taking them from their homes. They do not follow the laws of the Koran but rather their own moral code of behaviour called Pushtunwali. Modern day Pashtuns include Pakistani politician and previous cricket professional, Imran Khan and nobel prize winner, Malala Yousafzai. It should be noted that during the massive assimilation that took place during the Hebrews captivity in biblical Egypt, one of the few thing the descendants of Jacob held onto were their names. Both Khan (Kohan – the priestly tribe) and Yousafzai (son of Joseph) are clearly Jewish tribal names. In her passionate defence of women’s right for education, Malala Yousafzai tells of her fathers staunch support for her continued learning – In a fundamentally primitive Islamic culture, I find that interesting.

In terms of reaching out to and integrating the Pashtun into modern Israeli and Jewish culture, in the digital age, two game changers stand out. Social media networks and digital citizenship. Called on to ‘build a vessel in the holy land’, entrepreneurial visionaries Harry Rozenberg and David Itzkowitz decided to create a beer using ancient Ethiopian and Bnei Menashe recipes, which they intended to brew in Israel. They named their beer “Lost Tribes Beverage” and set up a website. While their beer on tap flowed through the offices of high-tech start ups in New York City, inundated with requests for contact from the ‘lost tribes’ Harry and David found themselves pulled into a larger narrative. In an ingenious effort to connect with our Pashtun brothers, and indeed with all the lost tribes, they created iTribe, a social media platform (to be released soon), that allows for the education and integration of the lost tribes all over the world. The application presents a mapped location of each group with a brief description of tribal claims, and it allows for the exchange, communication and sharing of information through a social network platform. But this is just part of their greater vision.

iTribe have also procured some forty dunim of land south of Tiberius in an area called The Valley of Springs – the possible location of the Garden of Eden, according to the Talmud, on which they are developing self-sustainable farms, using Aqua-ponics and Israeli sustainability technology. Their concept is to build a living education centre on the property where members of the lost tribes can learn to use Israeli technology to improve their living conditions, and to establish channels of trade and communication. They are also launching an online accredited college course on the narrative of the Tribes of Israel, from which partial proceeds will help finance the dissemination of technology to the tribes – which means participants in the course directly contribute to the growth, sustainability and independence of the tribes.

The lost tribes include the Igbo of Nigeria, the Shinto of Japan – who have a legend of being a chosen nation exiled from their homeland, who pray at their temple on Mt Moriya, whose priests wear a form of teffilin (phylacteries), and whose golden arc rests on four poles, and the Lemba of South Africa who claim Jewish heritage and have 10% DNA tested genetic ties to the priestly tribe, the Kohanim. Harry and David are excited about the future but I express my fear of fifty million Taliban arriving on our shores, telling us, (in the words of modern Afghani Jewish community leaders), they believe they are more Jewish than we are, as they throw a burka over my head and chain me to the kitchen sink. But they assure me that the process of integration will be slow and the modern day tribe of Yehuda – who was given the task of holding onto and propagating Jewish Law, will be called on to bring our holy tribal brothers up to speed.

And what of the sheer numbers – fifty million potential descendants of the children of Israel claiming their right of return? At first, Israel may have to consider Estonia’s model of granting e-citizenship to our holy brothers, once we’ve rigged them up to the grid. But for now, the iTribe pioneers suggest, “instead of bringing them all back to Israel, we will bring Israel to them, through ancient wisdom and modern technology, spreading the boarders of Israel.”

Harry Rozenberg and David Itzkowitz can be contacted at info@iTribe.us

About the Author
Born in South Africa, raised in Sydney and still shocked but recovering in Israel, Rebecca Bermeister writes about all things Israeli from the arsim at the hairdresser, to the politics of the Temple Mount. Exploring the brilliant tapestry that makes up this fascinating country, her short pieces are both poignant and amusing.
Comments